Far from acting as homage to an iconic film but rather operating as an impulse of unconscious nature, fed by a coincidence, this exhibition intends to mock the pretentiousness of a presumed rebel as announced by J.-L. Godard's linguistic suspense of decadent "Qu'est-ce que c'est degueulasse". For the artists on show, the political and the perfomative are intertwined in an almost monochromatic traffic of meaning that resists fixed hierarchies and routine. Curated by Adam Budak. 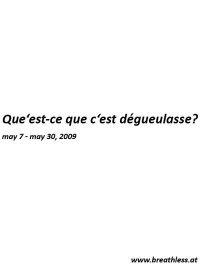 The exciting exhibition project curated by Adam Budak gathers the works of - mainly - the artists represented by the young upcoming Viennese galleries: Galerie Dana Charkasi, Galerie Andreas Huber, Momentum and Winiarzyk.
The use of the spectacular interior of the closed down former Vienna Market Hall in Wien Mitte as stage for the exhibition reflects the ambition to work with the various potentials of a cultural metropolis, reuniting a demanding artistic concept within a fascinating architectural frame.

Far from acting as homage to an iconic film but rather operating as an impulse of unconscious nature, fed by a coincidence, this exhibition intends to mock the pretentiousness of a presumed rebel as announced by J.-L. Godard's linguistic suspense of decadent “QU'EST-CE QUE C'EST DEGUEULASSE?”.

Echoing the film though, "Breathless" freely oscillates between the genres of road-movie and a film noire, and, like a film, it is "an attempt to show life as it is when one has repudiated a false morality and succeeded in living cheerfully without ultimate reason" (Tao Ruspoli).
It might be a cynical study of a spontaneously calculated expenditure of air, or an air-conditioned experiment to grasp the essence of respiration at the inflationary moment of a generational rupture, but, in fact, it is a venture into a grammar of extremes, between nouvelle vague's almost melancholic and "seriously stylish" production of "life" and an anarchic take at "anything goes", between the forced reduction of air and a necessary excess of breathing.

Flamboyant anti-heroes and villains and their optional lives carry promise of a revolt yet to come in a drama of aerial emotions till exhaustion and the limits of linguistic potency and failure. In the space between breaths, at the transgressive moment after breathing and before the necessary new act of inhaling, at the breathing's margins, a desire beyond breath, towards "forgetting the air", turns into a condition of breathlessness, a utopian state of clearance.

Less breath and excess of breath, breath’s insufficiency and loss, a despair of a new beginning. What is happening between the breaths? A state of emergency and alert, a ritual, shamans' favorite medium, breath is a template of intensities and subjectivities yet to be conceived. Breathing signifies primarily a meeting with ultimate reality: when doing breathing exercises one becomes conscious of the Self (atman), or penetrates into the very essence of life and the cosmic elements, or, finally, between breaths, may come to recognize a subtle sensibility noted in the heart that transcends it all (Georgios T. Halkias). Moreover, phenomenologically, breath relates to many "varieties of speech" (i.e. prayer, song, whispers, cries, etc), and as such, is, in itself, an articulation "before language, in front of the root of the tongue, where the gasping intake of breath acknowledges the divine; ruagh, breath, breathing, wind, breeze of the spirit, at its last gasp, dominating the wild beating of the heart" (Michel Serres).

For the "Breathless" artists, the political and the perfomative are intertwined in an almost monochromatic traffic of meaning that resists fixed hierarchies and routine. Here, "Breathless" turns into a paraphrase of Beckettian incantation: try again, breathe again, breathe better. C'est une dégueulasse!