The Parliament of Reality is a new, permanent outdoor installation. It draws attention to our surroundings, both man-made and natural, while challenging the way we perceive and act in the world. The project is inspired by the Althing, or Icelandic Parliament, the oldest national democratic institution in the world. Founded around 930 AD and held outdoors on the plains of Thingvellir until 1798, the Althing's center was the Logberg, or "Law Rock", a stone outcrop from which the "Lawspeaker" could address the crowd and direct events. 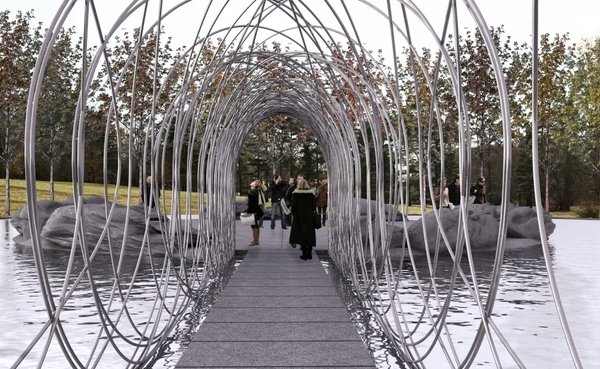 Icelandic artist Olafur Eliasson is renowned for exquisite sculptural environments that transform simple natural materials and phenomena—such as light, water, mist, and temperature—into cognitive and physically immersive experiences for his viewers. With his new work, The Parliament of Reality, commissioned for the Bard College campus in upstate New York by the Center for Curatorial Studies (CCS Bard), Eliasson pushes the viewer’s encounter with his art a step further by creating a space designed to inspire and physically accommodate the exchange of ideas through dialogue and negotiation. The project, to open in the spring of 2009, will be the artist’s first permanent public outdoor installation in the United States.

"Eliasson’s interdisciplinary work is perfectly suited to the life of a college campus," notes Tom Eccles, executive director of CCS Bard. "It draws the attention to our surroundings, both man-made and natural, while challenging the way we perceive and act in the world."

To be sited in a field near the Frank Gehry–designed Richard B. Fisher Center for the Performing Arts, The Parliament of Reality consists of a circular pond approximately 135 feet in diameter surrounded by a ring of 24 planted trees. Nestled in the center of the pond is a circular island, paved with individual stones that inscribe a twelve-point pattern derived from the meridian lines of nautical charts and the compass. The island is accessed via a stone bridge covered by a steel latticework tunnel. Based on the island’s floor, the tunnel’s design is composed of a series of ellipses, which gradually intensify toward the point where the bridge and island meet. As visitors cross the bridge, the tunnel’s design appears to gradually shift, providing a symbolic temporal experience evocative of the work’s overall conceptual goals. Large, smooth boulders situated in two rows around the outer rim of the island provide seating.

Eliasson notes that the “Icelandic parliament is called the Althing, meaning: a space for all things.” He envisions this project as “a place where students, teachers, and visitors can gather to relax, discuss ideas, or have an argument.” Eliasson states that the project “emphasizes that negotiation should be at the core of any educational scheme. It is only by questioning what one is taught that real knowledge is produced and a critical attitude can be sustained.”

Following the inauguration of the CCS Bard Hessel Museum of Art in 2006, this commission is part of a larger effort to provide more opportunities to engage with contemporary art by extending the Center’s programming into the campus and the local community. Leon Botstein, president of Bard College, has written that colleges and universities are “uniquely able to sponsor programs in which open debate and free inquiry are sustained.” Situated on the north end of campus in a large field across from the Fisher Center, Eliasson’s Parliament of Reality reflects Bard’s mission to locate critical engagement and artistic expression at the heart of democratic society.

In conjunction with the installation of Eliasson’s The Parliament of Reality, CCS Bard will also replant and reinvigorate Christian Philip Müller’s Hudson Valley Taste Makers. Müller’s work, which is also situated on the north end of the Bard College campus, was initially installed in 2003 and is composed of six different planting zones, using local agriculture, that represent six Hudson Valley counties—Columbia, Dutchess, Greene, Orange, Putnam, and Ulster. As with Eliasson’s work, Müller’s project seeks to create community and inspire conversation.

Construction on The Parliament of Reality will begin in March. The project, which will cost approximately $1.2 million, is being funded by the Luma Foundation. Founded in 2004 by Maja Hoffman, a member of the CCS Board of Governors, the Luma Foundation’s mission is the promotion and implementation of international and interdisciplinary projects that explore the relationship between art and culture, promote and enforce human rights, and protect the environment, as well as projects that promote interdisciplinary education and research.

Olafur Eliasson
Born in Denmark in 1967 to Icelandic parents, Olafur Eliasson presently divides his time between his family’s home in Copenhagen and his studio complex in Berlin. He attended Copenhagen’s Royal Danish Academy of Arts from 1989 through 1995. He has participated in numerous exhibitions worldwide and his work is represented in public and private collections including the Solomon R. Guggenheim Museum, New York; Museum of Contemporary Art, Los Angeles; Deste Foundation, Athens; and Tate Modern, London. In 2003, Eliasson became internationally known for The Weather Project, a gigantic artificial sun and mirrored ceiling installed inside the Turbine Hall at Tate Modern. His recent exhibitions include solo shows at the Museum Boijmans Van Beuningen, Rotterdam; Hara Museum of Contemporary Art, Tokyo; Malmö Konsthall, Sweden; Musée d’Art Moderne de la Ville de Paris; and Kunsthaus Zug, Switzerland. Eliasson’s first U.S. retrospective, Take your time: Olafur Eliasson, is now on view through February 24 at the San Francisco Museum of Modern Art. The exhibition will then travel to New York City; Dallas, Texas; and Sydney, Australia.

Center for Curatorial Studies and Hessel Museum of Art

The Center for Curatorial Studies at Bard College (CCS Bard) is an exhibition and research center dedicated to the study of art and exhibition practices from the 1960s to the present day. The Center’s graduate program is specifically designed to deepen students’ understanding of the intellectual and practical tasks of curating exhibitions of contemporary art, particularly in the complex social and cultural situations of present-day urban arts institutions. With more than 9,500 square feet of gallery space and an extensive library and curatorial archive, CCS Bard offers students intellectual grounding and actual experience within a museum.

In November 2006, CCS Bard inaugurated the Hessel Museum of Art, a new 17,000-square-foot building for exhibitions curated from the Marieluise Hessel Collection of more than 1,700 contemporary works. The new museum features intimate rooms encircling two large central galleries, and is scaled so that approximately 10 to 15 percent of the collection can be shown at any one time. The Hessel Museum extends the reach of the CCS Bard exhibition program, providing a place to test out the possibilities for exhibition-making using the remarkable resources of the collection as a whole.

Opening May 15-16, 2009
with a series of special programs, discussion, and debate with Olafur Eliasson and invited guests.