Barkley L. Hendricks retrospective highlights his paintings from 1964 to 2007. While he has worked in a variety of media throughout his career, and has explored diverse subject matter, he is best known for his striking and provocative life-sized portraits of everyday African-American people from the urban northeast. In the projects room, Khalif Kelly presents a new series of paintings based on vignettes from imaginary fairy tale adventures. Jeni Spota brings contemporary elements to classical themes in her paintings, exploring traditional, often religious, imagery, in a new way. 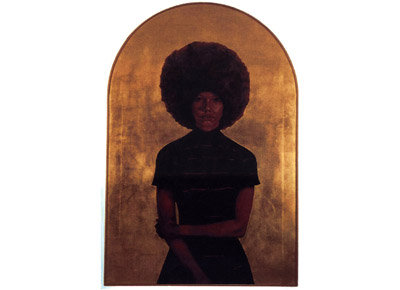 The renowned artist’s first career retrospective highlights his paintings from 1964 to 2007. While Hendricks has worked in a variety of media throughout his career, and has explored diverse subject matter, he is best known for his striking and provocative life-sized portraits of everyday African-American people from the urban northeast. Bringing to mind American realism, pop culture, and post-modernism in a way uniquely his own, Hendricks’ pioneering contributions to African-American portraiture and conceptualism claims a compelling space somewhere between portraitists Chuck Close and Alex Katz, and African-American conceptualists David Hammons and Adrian Piper. At times cool, at times confrontational, sometimes sexually charged, and always empowering, the work reveals the artist’s keen eye for his subject’s attire, attitude, style, and point of view. Hendricks' groundbreaking body of work has both influenced and paved the way for many of today's generation of artists.

Hendricks calls his camera his “mechanical sketchbook,” as many of his paintings are realized from photographs of people he encountered in daily life.

Birth of the Cool is organized by Trevor Schoonmaker, Curator of Contemporary Art at the Nasher Museum of Art in Durham, North Carolina.

The exhibition catalog includes essays by Schoonmaker; Thelma Golden, Director and Chief Curator of the Studio Museum in Harlem; and Franklin Sirmans, Curator of Modern and Contemporary Art at the Menil Collection.

Following its presentation at SMMoA, the exhibition will travel to the Pennsylvania Academy of the Fine Arts in Philadelphia, and the Contemporary Arts Museum in Houston. It was also shown at the Studio Museum in Harlem.

Born in Philadelphia, the artist studied at the Pennsylvania Academy of the Fine Arts before receiving his B.F.A and M.F.A. at Yale University, where he studied with legendary photographer Walker Evans. He is currently a Professor of Art Studio at Connecticut College, in New London, Connecticut.

Birth of the Cool has been named one of Vogue Magazine’s top 25 cultural events of the year.

The exhibition was organized by the Nasher Museum of Art at Duke University.

This exhibition is sponsored in part by the Andy Warhol Foundation for the Visual Arts, Inc., the National Endowment for the Arts, which believes that a great nation deserves great art, the Mary Duke Biddle Foundation, and the North Carolina Arts Council with funding from the State of North Carolina.

In his first museum exhibition, Khalif Kelly presents a new series of paintings based on vignettes from imaginary fairy tale adventures that portray children interacting with an array of weird and wonderful protagonists. With a fresh and vivid palette, a reductive, cartoon-like figurative style with a metallic-like patina reminiscent of video game robots and characters, Kelly creates scenes that on closer inspection reveal a mixture of personal archetypes and classic racial stereotypes.

The artist’s aesthetic includes references to the figurative work of Jacob Lawrence and to the controversial stop motion animations of George Pal, especially John Henry and the Inky-Poo and the Jasper series from the 1940s. Like Pal, Kelly utilizes the perception of race as a narrative device, something to work with and work against in the children’s formation of identity through play.

Kelly was born in Nashville, Tennessee in 1980 and grew up in Arlington, Texas. He received his B.F.A. in Painting from The School of the Art Institute of Chicago, and his M.F.A. from Yale University. The artist lives and works in New Haven, Connecticut, and also works in New York.

Support for the exhibition is provided by the Peter Norton Family Foundation on behalf of Eileen Harris Norton.

In her first West-Coast museum exhibition, Jeni Spota brings contemporary elements to classical themes in her paintings, exploring traditional, often religious, imagery, in a new way. Through her small canvases, the viewer is able to peer into another world, watching epic scenes play out with a surreal, impressionistic twist.

In this exhibition, which includes new work, Spota fills her canvases with cramped figures engaged in frenzied activity, complete with choruses of angels, rows of haloed figures, and the Virgin floating, often repeatedly, in a mandorla, creating a heavy, purposeful yet intimate connection with the viewer that is rarely found in the Medieval and Renaissance pieces that her works recall. Other canvases are more abstract in their subject matter, as if she has cut and pasted detailed elements from her works to form a new composite. Don't Tread on Me features a new bronze cast of her paintings, perfectly underscoring Spota's attention to the construction of both narrative and surface.

Adopting the flattened pictorial space of medieval icons combined with the rich, globular application of paint, Spota creates an ecstatic, almost abstract surface through her brushstroke technique, in which paint is heaped on in indulgent, cake frosting-like daubs and layers.

Spota was born in New York and earned her B.F.A. at State University of New York at Purchase and her M.F.A. from the School of the Art Institute of Chicago. She lives and works in Los Angeles.