Surfaces, Depths. Ruff numbers among today's most important photographers, his oeuvre encompassing such diverse subject areas as people, architecture, the universe, and the Internet. With its extensive solo exhibition presenting a total of about 150 works, the Kunsthalle Wien offers the first comprehensive survey of the artist's manifold production in Austria. Next to his series of large-format portraits from the 1980s, for which Ruff received international acclaim, and his architectural photographs of buildings by Herzog & de Meuron, which are based on instructions, the show focuses on his most recent cassini and zycles series. 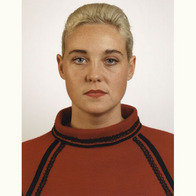 To try to see more and better is not a matter of whim or curiosity or selfindulgence. To see or to perish is the very condition laid upon everything that makes up the universe, by reason of the mysterious gift of existence.
Teilhard de Chardin, “Seeing,” 1947

The work of Thomas Ruff, who numbers among today’s most important photographers, focuses our attention on such diverse everyday subjects as people, architecture, the universe, and the Internet. With its extensive solo presentation with a total of about 150 exhibits from 11 groups of works, Kunsthalle Wien offers a first comprehensive survey of the artist’s manifold oeuvre in Austria.

Thomas Ruff studied at the Dusseldorf Academy of Arts, graduating as a student of Bernd und Hilla Becher besides Andreas Gursky, Candida Höfer, Axel Hütte, and Thomas Struth, all of them celebrating an international career these days. The photographer strikes us as a sharp and concentrated observer of his motifs. To him, objectivity is nothing neutral though, but has to be redefined with each new photograph. The series of large-scale portraits which Ruff started working on in 1986 and for which he became known internationally, for example, fascinates us because of the determined detachment with which he captured his models that were mostly acquainted with him. This approach makes for a hyper-precise, chirurgic gaze reproducing everything down to the last detail as equivalent. It also demonstrates the degree of the artist’s interest in the history of photography, how critically he considers its subject, and the skeptical attitude he sometimes adopts toward the medium.

From his stereoscopic views of the urban development myth of Brasilia and his apparently anti-essayistic architectural photographs of buildings by Herzog & de Meuron, which are based on instructions, to his digital processing of images of the planet Saturn available free of charge on the NASA website, the artist explores the concepts of the exemplary, of objectivity, of reality, and of zeitgeist. Based on half of his about twenty thematic groups of works created so far, the exhibition examines the concept pair surface/depth, which seems to be quite simple at first sight, but reveals itself as strongly discursive on closer inspection, and focuses the attention on formal aspects one comes upon again and again in his entire oeuvre.

Right in time for the International Year of Astronomy 2009, Thomas Ruff presents works from his most recent series Cassini – subtly manipulated pictures of Saturn and its moons taken by the Cassini spacecraft. It was the Italian astronomer Galileo Galilei who opened a window to the skies with his telescope 400 years ago. He thus revolutionized man’s image of himself in regard to the universe, but also his understanding of and his way of dealing with the concepts of nearness and distance, surface and depth.

Thomas Ruff. Surfaces, Depths conveys what these concepts, translated into pictures, do to the viewer on a phenomenological level and how they challenge him. The curves of Ruff’s zycles, distorted into the threedimensional sphere, unfold the sensory experience of roaming virtual depths only reserved to the human eye. Yet, gazing at the represented motifs also elucidates the artist’s contentual objective of providing a critical comment on the various possibilities of the photographic apparatus to depict and manipulate reality.

Thomas Ruff, born in Zell am Harmersbach in the Black Forest in 1958; lives and works in Dusseldorf, Germany.