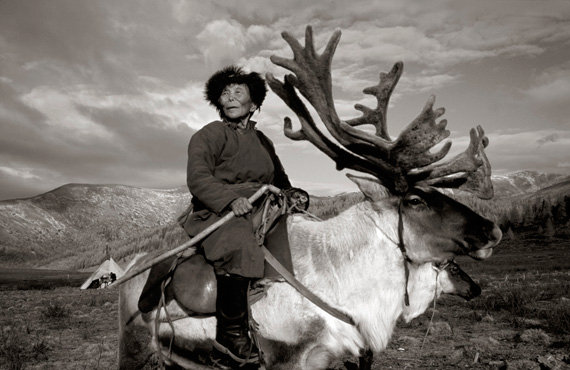 In the year 2000, I started my annual expeditions to Mongolia. My aim was to create a photographic record of the nomad's way of life and observe something of the wisdom hidden in their customs and manners before they became divorced from their natural and spiritual environment. The requirements for these journeys were basically two: little vegetable food and the willingness to ride long distances on horses, camels and reindeers - and if necessary to eat them.

There were times when I was totally cut off from urban civilization, yet I always felt strangely embraced in the Mongol wilderness. There was an imaginative resonance here between animal and man that could be found in places less primal. I found an old man in the Gobi who could make camels cry and adopt an orphaned calf by playing his fiddle; a Buryat lama who would call wolves to his doorstep by singing an ancient song. In the foothills of the Altai, I rode with Kazak shepherds who taught me how to capture golden eagles from the nest and trained them to hunt before releasing them back into the wild. This ecological mysticism linking animal and man became the guiding theme of my art.

In nomad culture, art - indeed memory itself - is inconceivable without this totemic connection to nature and its fabulous bestiary. The idea of becoming animal is the most important aspect of Eurasian religion, something that lies dormant in every individual and to which contemporary urban civilization, as a whole, is trying to reconnect. Nowhere do these ancient beliefs echo more vividly than in the rituals of Mongolia's hunters and shamans, who still hunt, heal and remember their ancestral spirits through a profound identification with the beast.

During the winter season, I would often travel with the Duhalar reindeer people and stay with an old shaman called Tsuyan. On odd days of the waxing moon, she would go into a trance and transform herself into a reindeer bull, flying off to a place she called the Dark Heavens: a twilight world full of light, sounds and voices from where the ancestors reveal their hidden messages in the form of birds and beasts. "We exists in relation to three things," she would say, "...nature, animals and the memory of ancestors." Once we forget, the guardian angels abandon us and we invite demons to take hold of our destiny.

Artists, in some way, take the place of shamans in contemporary societies. Their path is to enter and bring back messages from a timeless world, an analogous world of light and shadow where all things are connected. Without the ability to enter the timeless, art loses the power to remind. This exhibit is a testimony to a remarkable nomadic people whose memory is still intact; for whom the sunny world of the living is but a fleeting reflection of a greater spiritual continuum of heavens and ancestors, continually recalled through a marvelous pantheon of 'spirit-animals' who show the way.

HAMID SARDAR-AFKHAMI is a professional photographer as well as a scholar of Tibetan and Mongol languages who received his Ph.D. from Harvard University. After moving to Nepal in the late 1980's and exploring Tibet and the Himalayas for more than a decade, he went to live in Outer Mongolia in 2000 to make a visual record of people's customs and manners of life before they became divorced from their natural and spiritual environment.

Sardar-Afkhami's photographs specifically draw attention to the spiritual relationship of Mongolia's nomads to their fabulous pantheon of totem-animals. Merging art and exploration photography, he explores the cyclical consciousness of nomads focusing on the seasonal rhythms of migrations on the steppes, deserts and in the mountain forests, following horse breeders, bear hunters, wolf tamers, eagle masters and reindeer people.

His journeys in the last eight years have produced three award-winning documentary films, numerous articles and a single important photographic collection concentrating on Mongolia's nomadic culture at the cusp of a great irreversible change.