The Making of Art

In a large survey from the 1960s to the present, this exhibition presents the positions of artists such as John Baldessari, Joseph Beuys, Tracey Emin, Peter Fischli/David Weiss, Ryan Gander, Christian Jankowski, Louise Lawler, Jonathan Monk, Nedko Solakov or Andy Warhol. These artists reflect on an increasingly elaborate system, question the criteria of art, examine its methods and its institutions as sites, and shed light on the diverse connections and networks. With approximately 150 paintings, drawings, objects, installations, and videos. 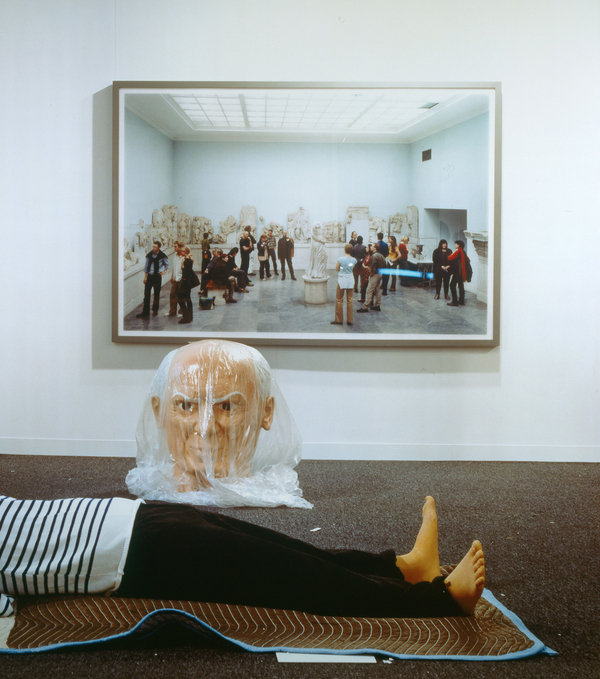 The exhibition The Making of Art offers a look at the web of relationships of contemporary art, where the triangle of the artwork, the artist, and the viewer has long since been expanded in many ways. Not infrequently, the relationships between artists, collectors, dealers, curators, and critics influence the content of the works; often this is also illustrated: In a large survey from the 1960s to the present, this exhibition presents the positions of artists such as John Baldessari, Joseph Beuys, Tracey Emin, Peter Fischli/David Weiss, Ryan Gander, Christian Jankowski, Louise Lawler, Jonathan Monk, Nedko Solakov, Mladen Stilinović, Andy Warhol/Jean-Michel Basquiat, and Ai Weiwei. These artists reflect on an increasingly elaborate system, question the criteria of art, examine its methods and its institutions as sites, and shed light on the diverse connections and networks. With approximately 150 paintings, drawings, objects, installations, and videos, the exhibition addresses the complex system of the art world in the era of upheaval we are currently experiencing.

In a work from 1972, Jörg Immendorff described his dream of being an artist: Ich wollte Künstler werden (I wanted to become an artist) was the title of his self-portrait. In a romantic vision, Immendorff portrayed himself sitting on the floor in an attic before an easel. By moonlight and a burning candle, he plays the “impoverished poet” as painter, as if he were Carl Spitzweg. In this deliberately pathos-laden painter’s idyll, we are confronted with familiar ideas that have long since influenced the image or idea of artists as bohemians beyond all conventions whose only goal is making their visions, their genius, reality. It is an idea that is found in today’s art only as a caricature. Jonathan Monk treats Sigmar Polke’s Höhere Wesen befahlen: rechte obere Ecke schwarz malen! (Higher beings ordain: Paint the upper right corner black!) with irony by painting the corner, pink, blue, and mauve.

In the meanwhile, the exemplary character of the artist’s existence has since spread to broad swaths of society: If one believes recent sociological studies, the democratization of the values of creativity, freedom, and authenticity did not begin only yesterday. These days, everyone wants to be unique and innovative. “Everyone is an artist,” asserted Joseph Beuys in the 1960s, a statement that was as revolutionary as it was provocative, and put forward the anticapitalist equation Creativity = Capital. Meanwhile, artists no longer seem to be in opposition to society but have arrived at its center.

Currently, an image of the artist as networker is crystallizing. Working in groups is just one possibility among many. The models for cooperation are manifold: For example, four artists have joined together in the Polish collective Azorro to produce films together, such as Portrait with a Curator. The artists’ group Chicks on Speed work in different constellations with other figures.

The product can be a performance—like Art Rules! —a film, or a piece of music. The Scottish conceptual painter Peter Davies captures this “who with whom, when, and why” in gigantic cartographic depictions that are almost too large to take in visually. In fact, the world of contemporary art is closer to the industry based on the division of labor in the film world than it is to the romantic, isolated studio of the artist inspired by genius, and so some artists come across like small businesspersons. The triad of the artist, the work, and the spectator has long since broken down. These works reflect on an apparatus that is becoming ever more complex, almost represent a separate genre, a late modern tradition that extends from the early 1960s into the present.

The 1960s marked the birth of the artwork based on institutional critique. The result was interventions, works, and objects that for the first time directly addressed their relationship to their context. In the wake of social revolutions, the works even opposed their own nature as commodities. When Piero Manzoni, for his work Merda d’artista (1961), filled ninety tin cans with his own excrement, Manzoni expanded the concept of the work of art almost to infinity, in a way that was as spectacular as it was anarchic. The work operated with the superelevation of the role of the artist and was also a subversive gesture directed toward the art market. In the late 1970s and early 1980s, a second generation of institutional critique followed, without which art since the 1980s can scarcely be understood or explained. The context of the work of art became the central theme of the work of a whole series of artists, and especially woman artists, in which they explored institutional functions and border zones in art. Louise Lawler’s theme is the extended institutional framework of the work of art. She dedicates herself to the museum space, which she demystifies as the sublime space of high culture. She shows the preparations for a museum; seen in this way, the museum seems not like a finite form as much as one context among many.
Candida Höfer also photographs museum and exhibition spaces, which she presents as empty, either in anticipation of being used or after the visitors have gone. She is interested in the side of the art world that is not on display. The artist shows the Museum of Modern Art in New York from the perspective of an insider, not as a place for presenting museum art: Preparations are being made on Mount Olympus. The Russian conceptual artists Komar & Melamid take it a step farther: their series Scenes from the Future presents the Museum of Modern Art and the Guggenheim Museum in New York of the distant future as ruins in a pastoral idyll.

Other symptoms of decadence beyond the museum, which has recently been at risk of losing its leading role to private collectors and art fairs, have been chronicled by photographers from Martin Parr to Jessica Craig-Martin, documenting the party people at art fairs such as the Frieze in London, the life of luxury at Art Basel Miami Beach, and the glamour at Art Dubai.

Whereas the second wave of institutional critique had its center in New York, such geographic filters have become almost entirely obsolete today. The art world appears to be truly globalized or is at least organized around a number of centers, and so artistic positions from Düsseldorf and Beijing, London, Kinshasa, the Philippines, Zurich, Glasgow, and Moscow all meet. Bucharest- based Dan Perjovschi caricatures the art world in cartoonlike wall drawings. His Bulgarian colleague Nedko Solakov sounds out the art world with subtlety and irony in equal measure with his large installation Leftovers —a selection of my unsold pieces from a private gallery I work with, treating his own success as a “leftover.” Using hidden surveillance cameras, the Chinese artist Ai Weiwei films a visit by an international consulting group from MoMA to his “out-of-the- way” studio in Caochangdi and presents their discussions to an international audience in the form of a video installation. Mladen Stilinovič plays with the parameters of success and cries out ostentatiously to the (still Western-dominated) art world: An Artist Who Cannot Speak English Is No Artist. The Moscow Conceptualist Yuri Albert roguishly turns a little painter on his head and states: I Am Not Baselitz! In the end, it is above all irony and subversion that today’s artists employ as they move between the poles of the museum and the market, success and crisis, romanticism and realism.

CATALOG: The Making of Art. Edited by Martina Weinhart and Max Hollein. With a foreword by Max Hollein and texts by Amanda Coulson, Wolfgang Ullrich, Martina Weinhart and others. German- English edition, 240 pages, 241 illustrations, published by the Verlag der Buchhandlung Walther König, Cologne, 2009, ISBN 978-3-86560-586-3 PRICE 29.80 € (SCHIRN), 32.00 € (bookstores) CULTURAL PARTNER: hr2-kultur. SPONSOR: With the support of the FAZIT-Stiftung and the Embassy of the United States of America.
MEDIA PARTNER: ARTE.