The project devotes itself to experimental and conceptual art practices that had established between the nineteen-sixties and eighties in Europe and South America under the influence of military dictatorships and communist regimes. The exhibition comprising more tha 300 works by around eighty artists has been developed by a team of thirteen international curators in close collaboration with the Kunstverein over a two-year process. The show undertakes the experiment of a shifted cartograph and an extended understanding of conceptual art, which has become established well beyond the Anglo-American canon. 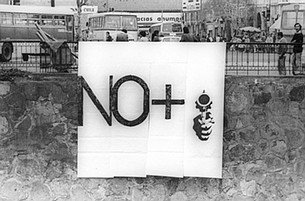 From May 30 to August 2, 2009 the Württembergischer Kunstverein in Stuttgart devotes itself to experimental and conceptual art practices that had established between the nineteen-sixties and eighties in Europe and South America under the influence of military dictatorships and communist regimes. The exhibition comprising more tha 300 works by around eighty artists has been developed by a team of thirteen international curators in close collaboration with the Kunstverein over a two-year process.

The exhibition’s nine sections will be focused on various contexts and strategies of artistic production along with their positioning vis-à-vis political and cultural repression in the GDR, Hungary, Romania, the Soviet Union, Spain, Chile, Brazil, Argentina, and Peru. Of equal concern here are both the particularities of and the relations between the different temporal and local environments.

The exhibition undertakes the experiment of a shifted cartograph and an extended understanding of conceptual art, which has become established well beyond the Anglo-American canon. In this respect, the related interdisciplinary, collaborative, and sociopolitical potentials are particularly emphasized—that is, the paradigm shifts between visual arts, politics, society, academia, architecture, design, mass media, literature, dance, theater, activism, and so forth, which have been educed by these potentials.

Furthermore, the focus is on artistic practices that not only radically question the conventional concept of art, the institutions, and the relationship between art and public, but that have, at the same time, subversively thwarted structures of censorship and opposed the existing systems of power. Here, body, language, and public space represent the pivotal instruments, of resistance, symbolic and performative in equal measure. The appropriation of media and distribution channels—especially the postal service—has in turn played a distinctive role in the establishment of the widely ramified networks between (Eastern) Europe and Latin America.

Another core theme explored by the project is the problem in presenting conceptual art forms and their equally ephemeral and processual, time- and location-specific dimensions. Crucial here is to do justice not only to the sensuous and participative distinctiveness of the works but also to their radicalism and their sociopolitical backgrounds.

In lieu of conceptualizing a comprehensive and homogenized design, the various curators will each develop individual presentational models for their respective exhibition section. Thus, the exhibition will not only be introducing different approaches to the restaging of conceptual practices but will emerge as a polyphonic parcourse, experienced as multidimensional cartograph.

A publication on the project will be released in fall 2009.

Ramón Castillo and Paulina Varas explore the play on content-related and formal discontinuities, contradictions, and de- and recontextualizations that characterized Chilean art from the nineteen-seventies to nineties. At issue here are both the artistic potentials related to a rearticulation of the cognitive and symbolic world—worlds that were at that time engaged by the ideologies of the military dictatorship—and the question as to how these potentials continue to be relevant today.

Fernando Davis is concerned with the artistic appropriation of the body and of public space in the scope of the military dictatorship in Argentina. The body was negotiated as an instrument of political resistance. Artists countered the measured order of urban space, dictated by dictatorial violence, with strategies of a poetic dèrive. Both cases involved the subversion of the precepts of meaning imposed by the state apparatus.

Cristina Freire centers in on the collection of conceptual artworks at the Museum of Contemporary Art of the University of São Paulo. During the military dictatorship period, the museum played a decisive role in providing space for free artistic expression and in forming a hub for the international mail art scene. Photography, as a documentation and distribution medium for performances, actions, and situations, along with the subversive use of the body are posited at the heart of her investigation.

Sabine Hänsgen focuses on the performances of the group Collective Actions, that is, on their “Trips out of Town,” which have been carried out since 1976 in rural areas surrounding Moscow. The actions have most frequently taken place on an empty snow-covered field, a terrain “liberated” from symbols and meanings. Hänsgen developed an “installation as diagram” for the exhibition that comprehends an index of all previous actions along with documentary materials and more recent satellite images of the action spaces.

Miguel López and Emilio Tarazona investigate two phases of aesthetic-political practices in Peru: first, during the military dictatorship from 1968 to 1975 and, second, during the no-less-violent guerilla war in the nineteen-eighties. While the nineteen-seventies were characterized by the dawn of institutional critique and participative art forms, art was later viewed first and foremost as a space for political protest, for the re-elaboration of Andean modernity, as well
as a means of processing the repercussions of violence.

Ileana Pintilie Teleagă highlights artistic “survival techniques” and subversive strategies that originated in Romania during the era of the communist regime, or Ceauşescu’s dictatorship. Evoking the body as an equally private and political realm for artistic experimentation counted among these strategies, as did ephemeral, ironic, and sociocritical approaches. Moreover, despite extreme isolation, access to international mail art existed in Romania.

Valentín Roma and Daniel García Andújar fathom the interplay between critical conceptual practices in art, architecture, and design in Catalonia during the final decade of Franco’s dictatorial reign. At the core are six works by Grup de Treball in which interdisciplinary working methods are reflected. These works are contextualized by an archive compiled from various sources, by other artistic works, and by interviews specifically conducted for the exhibition with players from the period in question.

Annamária Szoke and Miklós Peternák exploratively question the present-day relevance of subversive potentials presented by experimental and conceptual art of the nineteen-sixties through nineties in Hungary. In this context, they primarily focus on works that were destroyed, lost, or never realized, that is, those necessitating a reconstruction or restaging. In some cases, the artists are directly involved in the process and are thus effectuating a reevaluation of their earlier projects.

Anne Thurmann-Jajes spotlights the alternative art forms that succeeded in becoming established, beyond the sphere of official art doctrine and censorship, in the nineteen-seventies and eighties in the GDR. Access to the international networks of mail art, along with the so-called living-room galleries or original-graphic magazines, opened up opportunities for artistic experimentation with image, language, performance, sound, and film.

A Project by
Württembergischer Kunstverein Stuttgart

1 p.m.
Exhibition tour with the artists and curators

6 p.m.
Traces of the Hungarian Exhibition(s) at the C AYC (Center for Art and Communication), Buenos Aires, 1973–74
Lecture by Mercedes Kutasy

1 p.m.
Around 1970 Art Was a Prison
Lecture by Horacio Zabala