Walid Raad / The Schizoes of Madrid 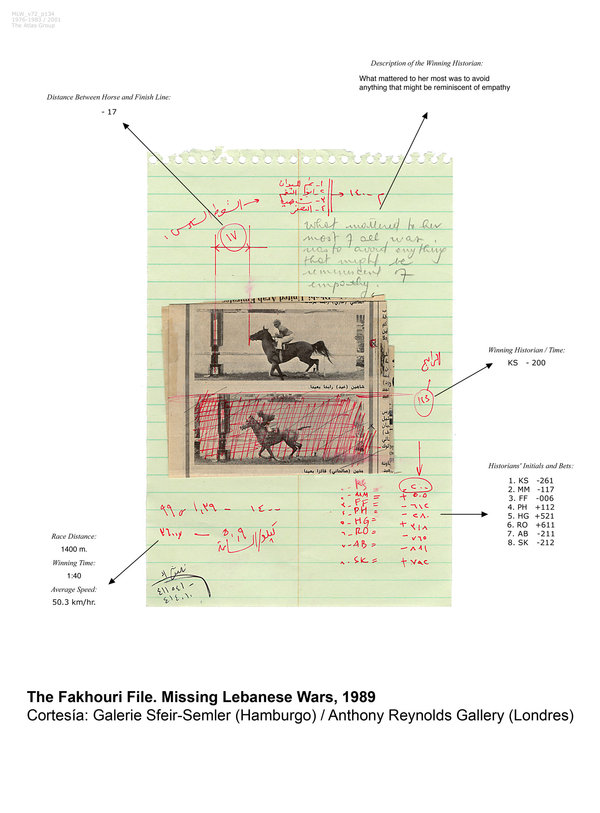 The Atlas Group exhibition (1989-2004), organized by Museo Reina Sofía and PhotoEspaña 2009, is an artistic project of archivist nature (character) developed by Walid Raad between 1989 and 2004, with the purpose of the contemporary Lebanese history research and documentation, especially during the 1975 and 1990 wars. With its headquarters in Beirut and New York, the Atlas Group Archive gathers a vast collection of documents –visual, sound and writings– found and produced by Walid Raad that deals with the Lebanon daily life in a crucial moment of its recent history. curated by Sergio Mah

The exhibition version of the project includes mix media installations, performance, video and photography, as to literally essays. Globally, it’s about works that mobilize the documental aura at the same time that seeks for its revitalization and redefinition of its epistemological statute. In fact, Walid Raad questions the visual, written and audiovisual documents authenticity and, in that sense, far from its aesthetical and conceptual value, the Atlas Group project provoke a crucial reflection and problematization about the way in which History is told and organized, at the same time that is “constructed” and “made”.

This speculative effort is even more pertinent and radical because of Walid Raad’s attention on a specific historical period strongly marked for the Lebanon Civil War Trauma. This is the first time that a very significant part of the Atlas Group works is going to be shown in Spain, making of all this an excellent opportunity to get to know one of the most singular an amazing projects of the last decades.

Walid Radd’s work have been profusely included in important collective exhibitions in the USA, Europe and Middle East, pointing out its participation in the Whitney Biennale (New York, 2002), Documenta 11 (Kassel, 2002) Venetia Biennale (2003), Home Works (Beirut, 2005), and the Archive Fever exhibition held on the International Center of photography (New York, 2008). On the other hand, the Atlas Group project have made numerous solo exhibitions, within the most important there are the one held on the Art Gallery of York University (Toronto, 2004), FACT (Liverpool, 2005), The Kitchen Art Gallery (New York, 2006), Hamburguer Banhof (Berlin, 2006), Henry Art Gallery (Seattle, 2007) and the Museo Tamayo (Mexico City, 2007).

The Schizoes of Madrid
The Madrid Figuration of the 1970s

The Museo Nacional Centro de Arte Reina Sofía presents The Schizoes of Madrid. The Madrid Figuration of the 1970s, which approaches the lively, complex cultural environment in Madrid throughout the final years of the Francoist dictatorship and the first period of democracy. The exhibition displays activities and works by a group of artists that, in an ambivalently modern gesture, decided to embrace figurative painting at the margins of this period’s dominant aesthetic and political conventions.

The exhibition features an entire generation of artists, Carlos Alcolea, Chema Cobo, Carlos Franco, Luis Gordillo, Sigfrido Martín Begué, Herminio Molero, Rafael Pérez-Mínguez, Luis Pérez-Mínguez, Guillermo Pérez Villalta and Manolo Quejido, framed within a time period from 1970 to 1985, in which the art scene changed indefinitely. Particular emphasis has been placed on these painters’ group activities that shared common concerns and desires, supported by a growing number of art galleries and encouraged by a new generation of critics in Madrid with whom they would find similar interests and ambitions.