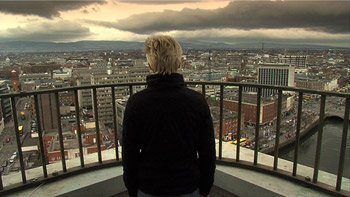 Ireland's presentation at the 53rd International Art Exhibition seeks to foreground two artists (but three practices) who operate without commercial gallery representation. The engagement of / with people forms a central element of their practice, and art is at the core. The technically-accomplished and visually-engaging artworks they produce exist as the gravitational centre for explorations around identity, labour, craft, design, globalisation, economics, language, architecture, beauty, money, value and being human. As a consequence their work operates both within and beyond the traditional ideas an art world affords itself.

For Venice 2009, Sarah Browne has commissioned a bespoke hand-knotted carpet from Donegal Carpets, a company renowned for its prestigious tradition of producing hand-knotted rugs for Irish embassies abroad. Far from its roots in the Arts and Crafts movement, the company now survives by machine production or by outsourcing labour to the Philippines. For this project however, Browne has initiated the revival of a somewhat anachronistic mode of production. Local women who used to work at the factory were re-employed to make the carpet. While seeming to recall certain modernist designs (or perhaps to reference Eileen Gray), the design and colour choice was actually dictated by the decision to work only from the surplus wool stocks remaining at the factory. A separate 16mm film work discusses with the workers their sense of connection with their labour and their experience of producing 'nationality'.

Gareth Kennedy's project draws on the situation of the contemporary art world at the 53rd International Art Exhibition, the cultural capital associated with music from Ireland and the import of the Neapolitan busker in Visconti's film of Thomas Mann's Death in Venice. He transplants buskers (street performers) firstly from Dublin city centre into aspiring civic spaces within Dublin's transforming docklands and subsequently, invites them to recreate their performances in Venice. Against the prevailing macro-economic backdrop, Kennedy assesses busking as a micro-economic and socio-economic act. He speculates on the architecture and ambitions of the settings and their respective and concomitant relationships to artists, acknowledging how certain economic and social transactions are deemed vital in some cities, while in others they are unwanted or illegal. It is a work about values, and what gets valued.

Kennedy Browne is the name under which the two aforementioned artists author a discrete body of work, distinct from their individual practices. A new video work addresses Dublin as a city of 167 languages and 'the city Google chose' for its EMEA (Europe, Middle East & Africa) operations. By creating a coincidence between a particular iconic architecture (the home of a leading trade union), a constituency of people (those of 167 languages) and a text by Milton Friedman (on how the pencil exemplifies the harmonious potential of the free market economy), Kennedy Browne decipher issues of globalism, migration and linguistic / cultural translation.

12.30 - 14.30
Sarat Maharaj- a conversation relating to the publication of Printed Project: Issue 11 'Farewell to Post-Colonialism -- Querying the Guangzhou Triennial 2008' http://www.visualartists.ie