A Journal of War and Exile. This exhibition retraces the career of Catalan photographer between 1936 and 1939, including his experience of the Spanish Civil War and his internment in the Bram camp in France. A renowned photojournalist in the troubled pre-war period, Centelles reacted to the putsch of the Extreme Right by joining the Democratic defence effort in 1936. 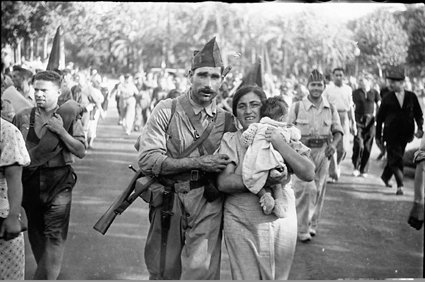 In this exhibition — "Agustí Centelles: a Journal of War and Exile, Spain-France, 1936-1939” — the Jeu de Paume is putting on show for the first time in France a collection of documents that are exceptional in many ways. The life of the Catalan photojournalist Agustí Centelles (1909-1985), like that of thousands of his compatriots, was disrupted by the Civil War and severely affected by the long Franco dictatorship. As a result his output, which had already won praise prior to the War, is both a personal narrative and a historical testimony and derives from different types of archives, some personal, others collective. The exhibition also offers an “insider’s” view of certain events of which the best known iconography to date was the work of foreigner sympathizers with the Republican cause, such as Robert Capa, the famous American photographer of Hungarian descent.

Strangely enough these documents that bear witness to a major 20th century conflict have only recently been discovered, for a long time elapsed before prints were made of most of Agustí Centelles’ pictures. The twofold exile he endured – in 1939 he fled to France and the Bram refugee camp, and then in 1944 went underground in Spain to escape the Gestapo – compelled him to hide his entire output. The longevity of the Franco regime subsequently prevented the “losers” from bearing open testimony for fear of endangering the dictator’s opponents. In 1976, after Franco’s death, Centelles returned to Carcassonne to unearth the exceptionally fine collection he had left behind him thirty-two years earlier. Since then his children have set up the “Centelles Archives” to preserve this heritage.

A hundred or so prints have been hung in the exhibition rooms at the Hôtel de Sully. They appear in chronological order: pictures of the Spanish Civil War, some them never previously seen, and others of the Bram camp, all of which are on show for the first time. Besides these photographs the exhibition includes three thematic slide shows, press cuttings, and the diary Centelles kept during his exile, certain excerpts of which are reproduced in the publication that goes with the exhibition.

The conflict between Spaniards was sparked off by a military coup in July 1936 against the Popular Front, which only recently — in February that year — had won the elections. In Barcelona the fighting broke out on 19 July. That day Agustí Centelles was the only photographer who was able to venture into the city centre. He had been one of the first in his country to adopt the Leica and his camera, which was still new at the time, made him sufficiently mobile to reach the midst of the cross-fire between the rebel troops and the Republicans. Catalonia, and especially Barcelona, played a key role in the defence of the Republic owing to the mobilization of large numbers of anarchists and its vast labour movement. The Catalan autonomous government, the fact that the Civil Guard sided with the Republic, and the creation of popular militias in which women took part for the very first time, made it a prime focus of resistance. The anarchists launched a social revolution based on collectivization and the enthusiasm of militant libertarians is perceptible in Centelles’ shots immortalizing street scenes, parades, ceremonies, and the fleeing clergy.

After a period as a war press reporter, Centelles was called up in 1937 to serve in the Photographic Services Unit of the Eastern Army and later worked for the Republican war propaganda department. It was in this capacity that he recorded the unprecedented bombing of civilian targets such as the cities of Barcelona and Lleida and the massive exodus to France, which he himself was to join at the beginning of 1939.

Two slide shows complete this collection of images: one is made up of photographs taken on the Aragon front, where Centelles described the fighting and the day-to-day lives of the militia, most of whom were anarchists. (It should be recalled that both France — governed at the time by Léon Blum and the French Popular Front — and Great Britain had declined to become involved in the active defence of the Spanish Republic, whereas Franco received immediate support from the German and Italian regimes. The Republic, on the other hand, benefited from the assistance of thousands of antifascist volunteers, including writers such as George Orwell or André Malraux, most of whom joined the International Brigades.) The second slide show refers to another conflict: the internecine struggle between the different left-wing factions in Barcelona. The elimination in May 1937 of the POUM, an anti-Stalinist Marxist party, marked the turning point towards Communist domination of the leadership of the Republican front.

The second part of the exhibition, which features its own slide show, documents the period Centelles spent in exile in the refugee camp in Bram. From early 1939 onwards, thousands of Spaniards crossed the French border to escape Franco’s advancing troops. When Centelles himself took flight, he carried with him a suitcase full of negatives but left his wife and son behind. It was to the latter that he dedicated the journal he started to write in Barcelona in January 1939 and continued after he was transferred to the Bram camp – a “model camp” according to the French authorities – in south-western France. In it he describes the extremely harsh existence he shared with his companions in misfortune in what is now referred to as a refugee camp but was more like an internment camp. The refugees eked out their existence in deplorable conditions amid a highly repressive ideological climate. While in this “prison”, to use his own word, Centelles nonetheless found the energy to write his diary and then to create a small photographic laboratory in his hut where, almost miraculously, he developed portraits and scenes of camp life.

In September 1939 Centelles obtained permission to work for a commercial photographer in Carcassonne and this enabled him to leave the camp. He became an active member of the Resistance, like many Spanish refugees, and set up a clandestine laboratory in the back of his employer’s shop, where he produced fake identity papers. When the Gestapo dismantled the Resistance network he was obliged to return to Spain in 1944, after entrusting his entire archive to the Dejeilh family, with whom he was lodging at the time.

Centelles hid for a while in the Catalan town of Reus, working as a baker, and then joined his family in Barcelona. The Franco government had withdrawn his journalist’s permit, so he embarked on a unobtrusive career as an industrial and advertising photographer and founded an agency that still exists today. He did not resume his original activities until after Franco’s death, when he developed some of the numerous negatives he had retrieved. His moving testimony of the carnage perpetrated by History are finally coming to light after long decades of oblivion.

With the support of the Institut Ramon Llull, Barcelone,
the contribution of Centelles Archives, Barcelona,
and in partnership with De l'air; Le Courrier International; Le Figaroscope;
parisart.com; Polka Magazine; RFI