Modernism as a ruin

An Archaeology of the Present. The architecture and design concepts by the artists represented in the exhibition contemplate "models" of utopian, pure design in their state of deterioration. Sometimes preserving moments of the crystalline, they are riddled with decay, entropy, ruin, yet find nourishment from the idea of the bricolage, the implementation "of that which is there," from the concept of recycling, so to speak. With works by 12 international artists. Curated by Sabine Folie with Ilse Lafer. 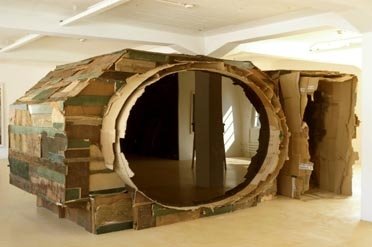 The exhibition sets its sights on modernity's design for a more humane and contemporary society since the early twentieth century: a design for new forms of living and new cityscapes. What happened to this utopia?

The architecture and design concepts by the artists represented in the exhibition contemplate "models" of utopian, pure design in their state of deterioration. Sometimes preserving moments of the crystalline, they are riddled with decay, entropy, ruin, and "rust" (Smithson), yet find nourishment from the idea of the bricolage, the implementation "of that which is there," from the concept of recycling, so to speak. With that, they formulate final day stages, testing survival on the remnants of a demised civilization. These remnants are the final resources. On the other hand, these approaches thus take up a practically utopian thought of "sustainability," the idea of a better society, born of the spirit of dystopia.

When desolation, neglect, and the degeneration to slums as bleak and relentless final evidence of an exploitative, brutalized society of competition, profit, and fanaticism have caused the utopia of a humane, enlightened society to collapse, then humility is called for in order to make something from the void with whatever means remain after the catastrophe. These dystopias are constructed from the hackneyed ideas of a thousand-year old human history, of the resonance and reflected memory of utopian design and architecture, in view of which an awareness ought to be generated that available resources are limited and a redefinition of the new, of progress is called for.

It is no coincidence that the genealogy of the exhibition's artists begins in the 1970s, a time in which the shimmer of pop and minimal art began to crumble and the post-industrial era made visible the limits of growth. Key figures here are Robert Smithson and Gordon Matta-Clark, who analyzed their present day in their own special way, critically and emphatically, also prophetically. Taking the concrete run-down or repressed reality of the cities' wastelands as well as the monuments of industrial archeology and the suburbs as their starting-point, they aimed at detecting the entropic state of the present, or possibly even invoking it. Despite the attraction of the shimmering and reflecting surfaces of 1930s Modernism that Smithson described in an equally ecstatic and ambivalent way in his legendary essay "Ultramoderne," Smithson and Matta-Clark became deeply involved in the entropic ruinous state as proof of fleetingness. Nonetheless, Smithson also described the state of postindustrial architecture with the concept of reversed ruins, buildings which "rise into ruin before they are built."

When Isa Genzken and Dan Graham in Chicago Drive or Private "Public" Space: The Corporate Atrium Garden take up the promise of Modernism's utopian architecture, that is, the Ultramoderne, in cruises through an iridescent, sparkling, crystalline, and simultaneously ethereally cold, gleaming Chicago of skyscrapers, or pursue the attempts to bring back nature manifest in corporate buildings—where talk is thus of the beauty of the architectural, its brittleness and fleetingness and false appearances likewise emerge, allegorically presented in the intro to Chicago Drive with the journey past the idyllic eternal calm of a cemetery, a special type of suburb of the dead.

The obverse of these representative buildings is to be found in the outskirts and their tower blocks, which Stephen Willats and Cyprien Gaillard both investigate in their own way. Gaillard accepts the dilapidated beauty of the neighborhoods degenerated to ruins and social problem zones, whereas Willats since the 1960ies has carried out systemic studies with the inhabitants of blocks of flats on the outskirts, presenting the results in diagrammatic photomontages.

Ecological and social utopian thoughts, as developed by Friedman and Matta-Clark, who was trained as an architect, have lost nothing of their explosiveness. Thus, quite a few present-day artists deliberately refer to "forerunners" from the 1970s; but there is also an indirect thread of thought figures orbiting Modernism's themes and their results which carry through until today and which we see reflected in the exhibition in works by Rob Voerman, Jeroen de Rijke / Willem de Rooij, Giuseppe Gabellone, Florian Pumhösl, Gyprien Gaillard, and Stephen Willats. An arc spans here from concepts such as the crystalline, entropy, ruins, and bricolage, which in reaction to Formalism have been increasingly theorized in Postmodernism, to the works shown in the exhibition.