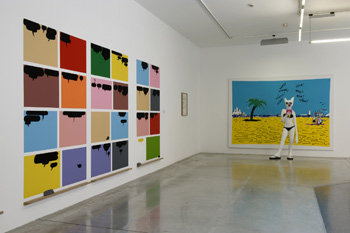 VRAOUM ! is an onomatopoeia that conjures up an image. It is a trajectory with a car at one end and a concept at the other. A noise that makes sense. We like composites such as comic strips, part grass-roots, part cerebral. Not that we have divided this exhibition at la maison rouge in two, with art on one side and comics on the other. We see art on all sides, and especially where it's least expected. VRAOUM! is a celebration of paintings, sculptures and drawings shown side-by-side. There is no hierarchy and certainly no divisions. Comic strips are presented as art and contemporary art as being fuelled by strips. Put simply, this is one big jubilation. We imagined encounters between these often similar worlds but in a flexible way. Sometimes comic strips fall into autonomous genres, such as westerns, sci-fi, eroticism, humour, microcosms, etc. Elsewhere, themes such as superheroes and manga have inspired a fabulous merging of visual art and strips.

We've known for decades that comic strips are art. When Warhol declared that "Walt Disney is the 20th century's greatest artist," he meant it. Yet this phenomenon had no obvious place in our culture. How many years did it take before the Centre Pompidou gave Tintin his dues? Meanwhile, enlightened amateurs, discreet and modest collectors, were at work in the shadows. They are the people we contacted, and they let us into their Aladdin's Cave: hundreds of original strips, from the very beginnings (Outcault, McCay, Saint Ogan, Herriman, McManus, etc.) to the present day (Moebius, Druillet, Trondheim, Crumb, Gottlib), not forgetting the classic European (Hergé, Jacobs, Franquin, Peyo, Jijé) and American artists (Alex Raymond, Will Eisner, Milton Caniff). We were given an equally generous and enthusiastic welcome by contemporary art galleries. Hence VRAOUM! will show painters and sculptors who are directly concerned by comic strips: Basquiat, Erro, Gilles Barbier, Wim Delvoye, Alain Séchas, Hervé Di Rosa and many more. Each of these artists' contributions reveals something about images but also, on a more reflexive level, about the semiotics of strips. For example, what is a speech bubble? A written spoken word! Or a hole in the drawing? What about panels and the spaces between them?
For many years, it was a common belief that the actual comic book, not the drawings, were the work and, because of this, original artwork by some of the greatest authors was overlooked, even underrated or mislaid. Franquin remembers how "drawings used to get trampled underfoot at the printer's!" Recent auction results show how much the situation has changed: the €800,000 paid for the gouached cover of Tintin in America by Hergé (1931) revealed a summit which others have since scaled. Granted, the value of a work isn't the be all and end all, but it is certainly an indication of how a particular era is feeling and what it collectively wants. Our choice wasn't guided by hammer prices and the ensuing media attention. We have consistently favoured the artistic qualities of the works. Hence masterpieces by Hergé, Jacobs, McCay, Franquin, Bilal and Moebius can be admired alongside exceptional original artwork by lesser-known authors, including some who have fallen into oblivion, such as Jacovitti, Calvo and Breccia. In this instance, VRAOUM! serves to reveal and uncover talent.
As for the history of comics, rest assured it hasn't been neglected. VRAOUM! shows Winsor McCay's first strips and a 1916 original by Richard F. Outcault, alongside works by contemporary authors such as Lewis Trondheim and Charles Burns. History features every step of the way, though not in a linear fashion. Instead, a new concept of historical data is put to the test, a sort of cartography in which history folds and unfolds to reveal the different phases of comic-strip art as countries, islands and continents. For example, the Franco-Belgian ligne claire school is mapped out with Alain de Saint Ogan pre-1930, reaching its classic era with Hergé and continuing with Tardi, post-1980 and beyond. Visitors, should they so wish, will have no trouble piecing together these fragments. Or they can visit VRAOUM! like an archipelago, island-hopping between the different parts in an ecstatic acceleration.