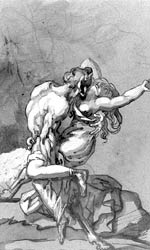 Western art treats sex only in a sole way (or nearly): violence. It is almost always, in the stories treating it, about trickery and trap, abduction and rape, struggle and murder. Ovid's metamorphosis is the ancient model of these dubious practices, where an infringing ritual comes out, that is to say a transformist ritual of which the zoophilic coitus of Leda seems to be symbolic. And the obsessional motive of the embrace ends up becoming the ambiguous excuse of a noxious fusion where love of another self is crystallising.

And yet, for a long time we have stopped seeing these images as what they are: an inexhaustible and cruel metaphor of what we call with a feminist word, dear to Bourdieu, the male domination. The old Western humanism reveals only (once again) its principle of deception.

This intervention, that claims to adhere to the critical liberty, as introduced in the Parti-pris series of the Louvre, of which the authors have been in charge, is not an ordinary exhibition. No worship of artists, but an effort of interpretation: an archaeology of the symptom that aims to hound down the strategies if desire and the tricks of the unconscious. In this way, thanks to a hundred works of art, an other history is elaborated, a counter-history where, from Ingres to Duchamp, from Michelangelo to Degas and alike, what counts is not so much the visual form as the sexual structure of the work of art.