Werkschau XIV: Works 1989 - 2007. In numerous works, red has been Inge Dick's motif. And red is also the predominant color in her Werkschau at the Fotogalerie Wien. Whereby, red is only an auxiliary term for the palette of red tones, rich in nuances, that Inge Dick has elicited with devices for the many-part Polaroid series since the early 1980s and most recently, for the 13 1/2 hour-long film zinnober. 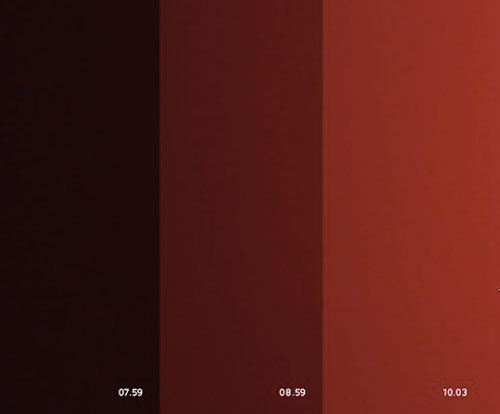 The Movement of Colors

Red. Tagrot, Boston red, zinnober. (Day red, Boston red, vermilion.) In numerous works, red has been Inge Dick’s motif. And red is also the predominant color in her Werkschau at the Fotogalerie Wien. Whereby, red is only an auxiliary term for the palette of red tones, rich in nuances, that Inge Dick has elicited with devices for the many-part Polaroid series since the early 1980s and most recently, for the 13 1⁄2 hour-long film zinnober. The author Bodo Hell wrote a “red list”[1] for her on which at least 81 red tones have a name in the German language, without having yet included the Pantone numbers or RGB values.
However, at the same time, red is also just a model, an extra, simply a pretext, because what Inge Dick actually wants to demonstrate is the light and the fluctuation of its intensity – the changes of natural light with the time of the day, or the effects of the mechanical settings on artificial light. The light allows itself to be visualized in colors. (Besides red, Inge Dick uses primarily white, black, and blue.) The colors themselves retreat, they no longer have their own independent pigment and lose their original materiality, until gaining that of the representational medium. The difference between image (in the sense of a likeness or representation) and picture is thereby abolished: The colors are not just a representation as that they themselves are the picture.

With the decision to capture the spectrum of the intensities of natural light filmically, Inge Dick makes a step towards continuous movement – in zinnober the day is whole again. While in the photographic series individual colors are singled out independent of time or light values, the red now moves. In the Polaroid series, the individual photographs prompt comparison – the darkness of the red of an early morn, its paleness during the day and its similarity with the default template red towards the evening – whereas in the HD video zinnober, our poor color memory hardly allows such moments of comparison. We register the changes, but the preceding red hues have long since escaped our memory. In its place, an entire cycle of uninterrupted daylight is in front of us, and in real time.
In all these experiments with the causality of color, light and time – whether it be with the small SX Polaroid camera or with the middle or large format Polaroids since 1995, or in the paintings (produced in just as great a quantity as her photographs), or in her first film project – for Inge Dick it is always a matter of “programming” a series, it is about the process of implementation, about the structure, which she brings into the image in the form of a time code. Inge Dick understands what it means to initiate thresholds of perception and to lend form to its immateriality. And she understands how to infuse a renewed fascination into the strict aims of her concept.