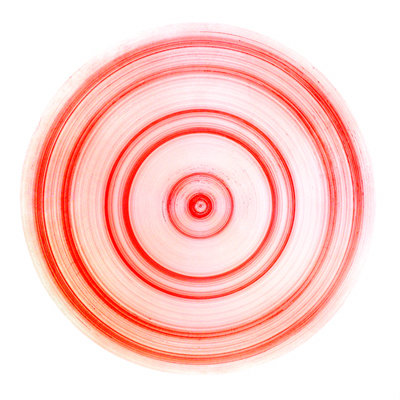 A proposition by Felicity Lunn

On the occasion of its summer programme, the CRAC Alsace has given carte blanche to Felicity Lunn, the British curator living in Zurich. Taking the theme of time, she has proposed a resolutely European and future-oriented selection of artists.
The Timewarp exhibition brings together works by twelve artists from different generations who investigate the ways in which the passage of time can be expressed visually through production, recording or manipulation.

While some artists engage with means of recording the duration of an action - whether this is natural (Jill Baroff), personal (Susan Morris) or purely artistic (Patrick Rohner), others are interested in the aura of the memory - through assemblage (Hans-Peter Feldmann), accumulation (Vanessa Billy) or accretion (Anna Barriball).

Paying particular attention to more current forms of production, the exhibition gives a large amount of space to the spheres of cinema and video and its strategies of temporal manipulation (Christelle Lheureux, Johannes Maier, Sophy Rickett, Perry Roberts) as well as to ephemeral or site-specific works. Schirin Kretschmann is, for example, presenting for the exhibition work that is simultaneously conceptual and highly sensual and combines an earlier piece with new installations created in-situ and may disappear during the exhibition. From video to drawing and from painting to ephemeral installation, the Timewarp exhibition offers a subjective cartography of the ways in which time might be perceived and experienced that the exhibition works describe, investigate and invent.

The exhibition is accompanied by a series of events: Workshop with the students from the ESAD in Strasbourg on the occasion of the National Music Day and a concert by Marianne Schuppe in July.

Felicity Lunn is an independent curator and critic based in Zurich. From 1990 to 1998 she was curator at the Whitechapel Art Gallery in London and from 2005 to 2008 she was director of Kunstverein Freiburg, Germany. She has taught in several universities and art schools, written regularly for Art Forum and Frieze magazines and curated exhibitions for art institutions internationally.

A graduate of the HGK school in Basel, Dunja Herzog was born in 1976. Dunja Herzog’s work is built around two fundamental features: on the one hand an interest in materially oriented work within specific spatial situations, on the other hand an interest with the subject “Africa”. Dichotomy, craft, material as an information carrier, historical references and socio-political issues on a global scale may serve as key words to describe her work.