A selection of Chinese contemporary painting. Figurative painting and photorealism mixes with expressive brushstrokes and sweet comics-aesthetic from artists whose careers soared in the 1990s and to the young artist generation of today. The exhibition highlights how the artists - in each their unique fashion - challenge and add their own takes on the country's classical art forms. They derive inspiration from the rest of the world, a western art tradition and the images of popular culture. 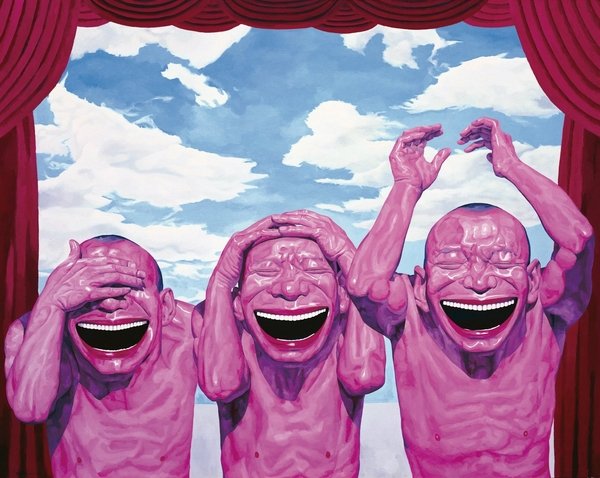 Figurative painting and photorealism mixes with expressive brushstrokes and sweet comics-aesthetic, when ARKEN during the summer of 2009 presents an eminent selection of Chinese contemporary painting.

The exhibition shows a nuanced picture of China’s painting scene today. From artists whose careers soared in the 1990s and to the young artist generation of today. The exhibition highlights how the artists – in each their unique fashion – challenge and add their own takes on the country’s classical art forms.

The artists experiment with new painterly expressions. They derive inspiration from the rest of the world, a western art tradition and the images of popular culture.

See no evil, hear no evil, but speak. In Yue Minjun’s painting Outside and On the Stage (2009) three hysterically laughing clones appear before a stage with a red curtain. The sky behind them – the symbol of the space of freedom – is executed as an illusionist backdrop. The three laughing clones partly mime the old saying ‘see no evil, hear no evil, speak no evil’. According to the saying, however, the last figure usually holds its hands over its mouth. In Yue’s painting instead the third clone holds his hands up in the air triumphantly. The work describes a situation in which the individual is able to speak but not see or hear. Yue employs the figures to take a critical stance towards the strict censorship and collective homogeneity distinguishing Chinese culture and history. At the same time, with the title Outside and On the Stage, he points out the hierarchical differentiation between Western and non-Western art that governs the international art scene. Like the three figures in the painting, China’s contemporary artists are both outside and on the stage.

Women images. In his portrait series Chinese Girls (2008) Qi Zhilong explores the duality characteristic of China’s development from an anti-capitalist Communist society to Deng Xiaoping’s market oriented socialism of today. In Qi’s portraits of women our time’s consumer culture is juxtaposed with romantic memories from the days of the revolution when the uniformed youths were celebrated for their courage and commitment. The three portraits in the exhibition depict young female red guards. At first glance we are seduced by the girls’ innocent appearance, their black almond eyes and long schoolgirl plaits. The girls look neither raw nor in fighting trim, but rather resemble innocent doe-eyed schoolgirls. Their gazes go from innocence to terror. By removing characteristic Communist marks, e.g. the red star, Qi imbues the portraits with a whole other meaning which goes against the traditional portraiture of the heroes of the revolution. When Qi decides only to portray young female models with an innocent expression, he is also referring to the consumer culture of today, where posters of young, beautiful and uniform models permeate the city space and fashion magazines.

All alone. In Li Jikai’s Mushroom (2009) a small blackhaired boy is sitting in front of a giant and obviously very poisonous, yellow toadstool with black dots. The earth is desiccated, and the only natural plant growth left are the poisonous toadstools. A white hose snakes across the ground. The hose is a recurrent motif in Li’s works. With the other recurrent objects – empty boxes, an open book with blank pages and broken boards – it symbolises rests of a shattered civilisation where only a single human has been left. The painting shows a state of gloom, loss and loneliness which recurs in Li’s paintings. Li represents a young generation of artists, often known under the heading ‘the ego generation.’ In an attempt to gain greater insight into human identity and psychology, the young artists replace social issues with individual ones. China’s political past, oriented towards collective communities, has been replaced with themes relating to their own lives, dreams and feelings.

Image: Yue Minjun Outside and Inside the Stage, 2009