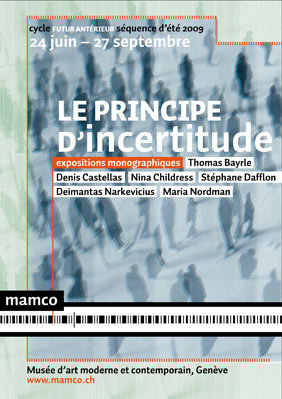 This 23 June Mamco will inaugurate a new sequence of six shows entitled Le Principe d’incertitude* (The Uncertainty Principle). The museum will be focusing quite a lot of attention on painting in this case, with Thomas Bayrle, Stéphane Dafflon, Nina Childress and Denis Castellas. It will also be featuring both an installation by Maria Nordman and the second part of its retrospective devoted to Deimantas Narkevicius.

A major event in this upcoming program is the first Swiss retrospective devoted to Thomas Bayrle (Frankfurt, 1937). This German artist began his career in the mid-1960s with pieces that revealed pop and op art influences. Prior to that, Bayrle had worked in a weaving mill. It was a fundamental experience that left him fascinated with the combinatory structures of fabrics. Later he was to transpose this structural model to the images he puts together through repetition and assemblage while working from a motif in a smaller format.

Their Combination is Spectacular features 200 pieces classified by thematic affinities and spanning the whole of the artist’s career, from the 1960s to the present. Paintings, silkscreen prints, drawings, collages, objects, films — Bayrle uses all types of supports in elaborating a multifaceted body of work that plays on graphic effects and optical games. In his works the artist repeats a multitude of motifs (characters, telephones, buildings, cameras), logos or lines to compose portraits of both anonymous and famous figures, images of manufactured objects or architectural landscapes. Following this same principle, Bayrle fashions sculptures from great tangles of cardboard strips, suggesting a complex network of highways. Based on the principle of the Moebius strip, the sculptures are a metaphor of a society going in circles. This critical view of the modern world lies at the heart of Bayrle’s work, which questions individuals’ relationship to their environment in an industrialized, highly technicized society.