A large number of feminist artists from the early 1970's adopted aspects of self performance to unhinge the alignment of certain codes of objectification with the female body. On display are five films, bringing artists together from different generations and backgrounds, grouped around the idea of the masquerade. Featured artist: Eleanor Antin, Joan Jonas, Manon, Ursula Mayer, Cindy Sherman, Hannah Wilke. Curated by Gianni Jetzer. 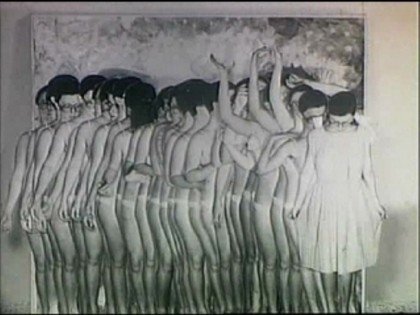 A large number of feminist artists from the early 1970’s adopted aspects of self performance and masquerade to unhinge the alignment of certain codes of objectification with the female body, as Amelia Jones remarks in her essay Manon and Masquerade – Gender as Counter- Transference.

In conjunction with Manon’s first show in the U.S., five films from female artists are added as an additional layer to her exhibition, bringing artists together from different generations and backgrounds, grouped around the idea of the masquerade.

In her filmic performance The King (1972), Eleanor Antin applies hair to her face. She moves through a variety of bearded faces seeking the identity most appropriate to her facial structure and satisfying to her aspirations. Antin transforms herself into a man and adopts one of her recurring performance personae, "The King."

In Cindy Sherman's Doll Clothes (1975), a paper doll comes to life, trying on outfits as proxy alter-egos before being stripped and put away by her owner. Stuck in a two-dimensional reality and ultimately subject to the desires of another, the doll is portrayed equally through her rebellion and vanity, which seasons the social criticism with healthy doses of humor and play. In The Lunch in Fur / Le Déjeuner en Fourrure (2008), Ursula Mayer presents a fictional meeting between three historical personalities in their later years: the artist Meret Oppenheim, the singer Josephine Baker and the photographer Dora Maar. These women, in a state of contemplation, recall different events in their lives. Like the film images, the spoken text also follows a woven, ritualized movement, which in turn broaches the question of the psychological constitution of memories.

Based on the 1972 performance of the same name, Organic Honey’s Visual Telepathy, a film by Joan Jonas, is an enigmatic ritual of identity. In this performance, Jonas plays both herself and her masked double Organic Honey. This alter ego, whose guise is a frozen doll’s face adorned in feathered headdress and costumes, embodies artifice, masquerade and narcissism. The film examines female gestures and archetypes, both personal and cultural. In using disguise and masquerade to examine the self, the film of Jonas inquires into the subjectivity and objectivity of personal identity.