Silke Otto-Knapp: Present time exercise, the exhibition presents 12 paintings produced by the artist between 2005 and 2009. He works with watercolour and gouache on canvas, repeatedly building up and dissolving the surface to create paintings of subtle effect. Polaroids: Mapplethorpe, is the exhibition of 92 Polaroids, selected from a body of over 1500, offers a compelling insight into the celebrated and controversial photographer's formative years and the development of his artistic identity. 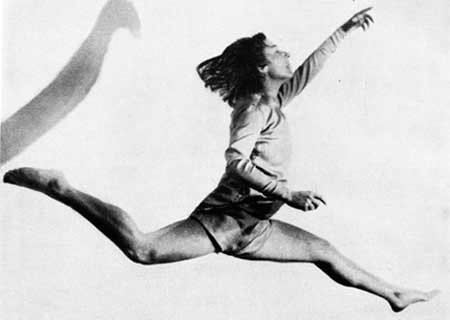 Silke Otto-Knapp: Present time exercise is the first major exhibition of the London-based artist’s paintings in the UK. Devised as a single installation for Modern Art Oxford’s Upper Gallery, the exhibition presents twelve paintings produced by Otto-Knapp between 2005 and 2009.

Silke Otto-Knapp works with watercolour and gouache on canvas, repeatedly building up and dissolving the surface to create paintings of subtle effect. Drawing on a photographic archive of visual sources that refer to the spatial staging of the formal garden and the abstract language of choreography, Otto-Knapp’s tautly constructed yet mutable compositions are rendered in layers of diluted pigment and metallic silver monotones. More recent paintings reveal the artist’s evolving investigations into the construction of pictorial space with a renewed approach to the figure and colour through which more complex narratives emerge.

The exhibition will be Silke Otto-Knapp’s first in a public Gallery in the UK since her earlier survey at the Kunstverein Düsseldorf in 2003 and her display at Tate Britain as part of the Art Now series in early 2005.

To coincide with the exhibition, Modern Art Oxford is producing a fully illustrated monograph on Otto-Knapp’s work with essays by Suzanne Cotter, Jan Verwoert and Catherine Wood. Published with the collaboration of the Walter Phillips Gallery, The Banff Centre.

ARTIST BIOGRAPHY
Silke Otto-Knapp was born in Osnabrück, Germany in 1970 and now lives and works in London. She has exhibited in solo and group exhibitions in the UK and internationally including British Art Show 6, various venues, Gateshead, Manchester, Nottingham and Bristol, 2005-6, 9th International Istanbul Biennial, Istanbul, 2005, and The Undiscovered Country, Hammer Museum, Los Angeles, 2004. Solo shows include 50ft Queenie, Art Now, Tate Britain, London, 2005 and Orange View, Kunstverein für die Rheinlande und Westfalen, Düsseldorf, 2003. Her exhibition Standing anywhere in the space in a relaxed position, curated by Kitty Scott, will be presented at the Walter Phillips Gallery, The Banff Centre, from 25 July to 27 September 2009.

Showing concurrently with Otto-Knapp's exhibition will be Polaroids: Mapplethorpe, on display in Modern Art Oxford's Lower and Upper Galleries. This exhibition was organised by the Whitney Museum of American Art, New York, in collaboration with the Robert Mapplethorpe Foundation, New York.

Polaroids: Mapplethorpe presents the early instant photography of Robert Mapplethorpe (b.1946, d.1989). The exhibition of 92 Polaroids, selected from a body of over 1500, offers a compelling insight into the celebrated and controversial photographer’s formative years and the development of his artistic identity.

In the early 1970s, Mapplethorpe lived in New York’s legendary Chelsea Hotel with then lover, later friend, the rock singer Patti Smith. There, filmmaker Sandy Daley lent Mapplethorpe her Polaroid camera, marking the beginning of his experiments with photography. Drawn to the process for its immediacy, Mapplethorpe commented that instant photography “was the perfect medium, or so it seemed, for the 70s and 80s, when everything was fast. If I were to make something that took two weeks to do, I’d lose my enthusiasm. It would become an act of labour and the love would be gone”.

Intimate through their smallness of scale, the spontaneity of these early photographs contrasts starkly with his highly stylised images for which he later became famous. Signature elements of Mapplethorpe’s later work are visible in these early nudes, flower studies and still lifes, and his portraits of lovers and friends including Helen Marden, Sam Wagstaff, Marianne Faithfull, and Patti Smith. Poignantly simple, at times explicitly sexual, they range in tone from tender to provocative.

This exhibition was organised by the Whitney Museum of American Art, New York, in collaboration with the Robert Mapplethorpe Foundation, New York.

Polaroids: Mapplethorpe is curated by Sylvia Wolf. The exhibition is accompanied by a fully illustrated book of the same title, which has been co-published by Prestel and the Whitney Museum, and is on sale for £30.

ARTIST BIOGRAPHY
Robert Mapplethorpe was born in 1946 and raised as a Roman Catholic of English and Irish heritage in Queens, New York. He completed a B.F.A. from the Pratt Institute in Brooklyn, where he worked across various media, including collages of found photographic images, the basis of his interest in the medium.

In the early 1970s, he began experimenting with Polaroid photography. By the mid 70s photography had become Mapplethorpe’s principle means of artistic expression. He began taking photographs of a wide circle of friends and acquaintances, including artists, composers, socialites, pornographic film stars and members of the S&M underground. During the 1980s, his focus shifted to exploring more formal codes of classical beauty, with flowers and still lifes, as well as statuesque male and female nudes.

Sylvia Wolf, Director, Henry Art Gallery, Seattle and curator of Polaroids: Mapplethorpe, will give a tour of the exhibition on Saturday 4 July at 3pm. £4/£3 concessions. Booking essential, please call 01865 722733.