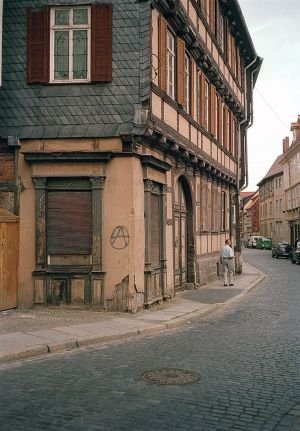 Matthew Buckingham’s exhibition, Time Proxies, brings together a wide range of works in a variety of media that address how we use memory, both personal and public, to define the present moment. In each of these sculptural, photographic, aural, and moving-image works, Buckingham exploits a different experience of time while inviting us to reconsider some of our most basic assumptions. Among the most fundamental of these is the notion of “Universal Time,” a term adopted internationally in the 19th century to denote the temporal scale used to divide the world into twenty four hours of solar time, thereby allowing for global coordination and synchronization of communication and transport. This historical reference reminds us that time is a cognitive construction that we use to “tune” ourselves to each other and our environment.

In Celeritas (2009), one of the new works in the exhibition, a phrase is silk screened onto a chalk board enclosed in a wooden cupboard —these words are illuminated by light that has traveled a duration of___minutes &___seconds—, inviting us to reflect on the speed of light as an imperceptible marker of time. (The travel time of the light falling on the cabinet is calculated and then written in with chalk). After the exhibition ends this information is erased; when the work is shown again the time is once again calculated for that specific situation. In this project, our sense of duration changes in relation to the present moment. We may find ourselves close to the limit of temporal perception, perhaps reminded that life unfolds somewhere between seemingly instantaneous light-speed and imperceptibly slow geological time. In another work, The Six Grandfathers, Paha Sapa, in the Year 502,002 C.E. (2002), Buckingham shows a photograph of the Mount Rrushmore National Memorial as it would appear after 500,000 years. This monumental sculpture, with portraits of presidents George Washington, Thomas Jefferson, Theodore Roosevelt and Abraham Lincoln carved out of the granite mountain, has become unrecognizable. As erosion erased the monument, its cultural, political and social values faded away. The four effigies on Mount Rushmore are sometimes viewed as a symbol of man’s victory over nature. But they may also be seen to allude to the oppression and subjugation of Native Americans (given that this mountain is part of lands considered sacred by the Sioux nation). Ultimately, however, the politics of Indigenous sovereignty may prove as susceptible to organic, “natural” temporality as to a “constructed” sense of time.

Everything I Need (2007), explores the different processes of memory activated by psychologist Charlotte Wolff’s return visit to Berlin, her native city, 45 years after her emigration to Paris, and later London. In her autobiography, she recalls the feelings she had on this visit, an invitation from the L.74 collective of Berlin lesbians. Her text reflects on the difference between Berlin from the time of the Weimar Republic and the city as it is today. This installation comprises a double color projection with sound. One screen shows the inside of an airplane whose design is characteristic of the 1970s, in a long takes that evokes the gaze of a passenger lost in thought. The other recalls Wolff’s thoughts by means of a series of projected intertitles. As her memories intertwine with the new reality of contemporary Berlin, they shape her vision of the present.

Likeness (2009), a new moving-image work, examines the ambiguities of time integral to portraiture and portrait painting. Focusing on the image of a small dog that appears in Velázquez’s 1659 portrait of Felipe Próspero, son of Philip IV and Marianne of Austria, this film installation juxtaposes 16 mm projections, sound narrations and pieces of furniture wrapped in moving blankets, in order to muse on why we feel “looked at” by the painted likeness of a person (or an animal), and what type of psychological time unfolds between the painter, the sitter and the viewer. Such concerns resonate with other works included in the show, especially as they pertain to how we understand the past through biography—as in False Future (2007),—and through material traces which often present themselves as enigmas, as seen in Burglar Alarm (2008), Peace and Anarchy (2004), and Image of Absalon to Be Projected Until It Vanishes (2001). For this show, Buckingham has also included a work that intervenes in the public space. Detour (2002), now occupies a marquee at the Ópera subway station in central Madrid where it displays a date and the URL of the Museo Reina Sofía’s website explaining how the city of Los Angeles was founded by the Spanish.

Biography
Matthew Buckingham was born in Nevada, Iowa in 1963, and currently lives in New York City. He studied at the Art Institute of Chicago (1984), received a BA from the University of Iowa (1988), an MFA from Bard College (1996) and attended the Whitney Independent Study Program (1997). His work has been seen in one-person and group exhibitions in various museums and galleries in Europe and the United States, including ARC / Musée d’art moderne de la Ville de Paris, Paris (1998); Museum Moderner Kunst, Vienna (2003); The Whitney Museum of American Art, New York (2003); Whitechapel, London (2004); Camden Arts Centre, London (2007); Hamburger Bahnhof National Gallery, Berlin (2007) and Museum of Contemporary Art, Chicago (2008); He was a 2003 recipient of the DAAD Artist in Berlin Fellowship.