Photographs 1946-2004. A selection of nearly 200 photographs spanning the artist's entire career are presented roughly chronologically, highlighting major themes and benchmarks of Avedon's output: his early, post-World War II street scenes; his breakthrough Paris fashion work in the 1950s; his far-reaching survey of American counterculture in the 1960s and '70s; his Reagan-era series, which focused on ordinary people living in the western United States; and his portraits of the nation's most influential people. Whether photographing politicians, artists, models, or Hollywood stars, Avedon revolutionized the genre of portraiture. 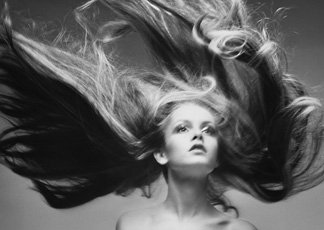 As a highlight of its summer exhibitions schedule, the San Francisco Museum of Modern Art (SFMOMA) is pleased to present Richard Avedon: Photographs 1946–2004, on view from July 11 through November 29, 2009.

Widely celebrated as one of America's preeminent photographers, Avedon was among the first to challenge the conventional boundaries between studio photography and reportage. Some of his best-known portraits—a young Bob Dylan standing in the rain, Marilyn Monroe caught in a vulnerable moment, Andy Warhol and his Factory cohorts—are the most iconic of the 20th century.

Whether photographing politicians, artists, models, or Hollywood stars, Avedon revolutionized the genre of portraiture. His daring style rejected conventional poses and instead captured both motion and emotion in the faces of his subjects, often encapsulating their intrigue in a single honest moment.

SFMOMA is the only U.S. venue for this exhibition, which is the first major retrospective of the Avedon's work since his death in 2004. A selection of nearly 200 photographs spanning the artist's entire career are presented roughly chronologically, highlighting major themes and benchmarks of Avedon's output: his early, post–World War II street scenes; his breakthrough Paris fashion work in the 1950s; his far-reaching survey of American counterculture in the 1960s and '70s; his Reagan-era series, which focused on ordinary people living in the western United States; and his portraits of the nation's most influential people.

The exhibition was organized by Helle Crenzien for The Louisiana Museum of Modern Art, Denmark, in cooperation with The Richard Avedon Foundation. Its San Francisco presentation is overseen by SFMOMA Senior Curator of Photography Sandra S. Phillips and is made possible by generous support from the Bernard Osher Foundation and Credit Suisse Securities (USA) LLC.

"Avedon is one of our great photographers whose work only increases in influence and resonance," says Phillips. "SFMOMA is thrilled to present this important overview, which offers the first opportunity to examine the whole of Avedon's achievement and his integral place in the history of photography."

Avedon was committed to photography as a social transaction. His subjects—even those who were anonymous—face the camera in implicit awareness of their collaboration in the portrait-making process. Beginning with one of Avedon's early street photographs (taken in Rome in 1946) and ending with his portrait of pop musician Björk (made less than four months before the photographer's sudden death), Richard Avedon: Photographs 1946–2004 reveals the profoundly social dimension of all the artist's work, celebrating his never-ending fascination with people and his persistent desire to absorb and represent cultural change.

Richard Avedon was born in 1923 in New York City to Russian Jewish parents; he died in 2004 of a cerebral hemorrhage in San Antonio, Texas, where he was on assignment for The New Yorker. He first began taking pictures at the age of 19 in the U.S. Merchant Marine, where his role was to take identity photographs of servicemen with the Rolleiflex he had been given by his father when he left home. Upon his return to New York in 1944, he began working as an advertising photographer for a department store, but he was quickly discovered by the legendary Alexey Brodovitch, at that time artistic director of the fashion magazine Harper's Bazaar. Soon he was delivering photographs to Harper's regularly, as well as to Life, and Look. By 1946 he had established his own studio. For the next six decades, Avedon had an enormously successful career, making pictures both for magazines and artistic display, bridging journalism and the art world, insiders and outsiders.

Avedon was also one of the most innovative fashion photographers of our time. A great admirer of Martin Munkácsi—the Hungarian photographer who revolutionized the fashion world with dynamic images of models in motion—Avedon followed in his hero's footsteps by producing inventive scenes of urbane women in scenarios that were groundbreaking for the day. His famous Dovima with elephants, evening dress by Dior, Cirque d'Hiver, Paris, August 1955, for example, does more than capture the glamour of a renowned model in elegant couture. Depicting the subject amid hay and sawdust, and between two elephants, the picture itself becomes a fantasia of desire, pleasure, and display. Avedon's talent as a fashion photographer was so legendary that he became the inspiration for the film Funny Face (1957), with Fred Astaire playing the part of the young New York photographer.

Among his most powerful works from this period are the group portraits that assemble members of social microcosms, such as his portraits of The Family, as he called his encyclopedic survey of political figures from America's bicentennial year; civil rights activist Julian Bond and members of the Student Nonviolent Coordinating Committee; and Andy Warhol and members of The Factory, an unforgettable photograph that conveys a sense of improvised mischief (its subjects posing in various stages of undress) though it was actually a staged and highly controlled tableau.

Avedon had his first major museum exhibition in 1962 at the Smithsonian Institute, followed by other shows at important institutions throughout the country—exhibitions that typically centered on the fashion aspect of his work. As late as the mid-1970s, very few museums recognized contemporary photography as a "serious" artistic medium. But eventually photography began to gain foothold in major collections, exploding as a field of interest in the art world, and Avedon was there at just the right moment.

His hallmark series In the American West (1980–85)—a body of portraits devoted to unknown denizens of the rural West—was received quite differently from his earlier work for fashion magazines. Commissioned by The Amon Carter Museum in Fort Worth, Texas, Avedon traveled through 13 states and 189 towns in the western United States from 1979 to 1984, taking nearly 17,000 photographs along the way. These images of farmhands, oil workers, petty criminals, waitresses—many dramatically oversized, and all depicting the subjects against a stark white background, with no shadows or reference to place—present ordinary human frailty rather than the stereotypes of rugged grandeur so often associated with the American West.

During the final two decades of Avedon's career, he continued to create some of the most well-known images of key cultural icons, including Nobel Prize recipient Kofi A. Annan, artist Roy Lichenstein, writer Salman Rushdie, peer photographer Lee Friedlander, and of course several important self-portraits.

Richard Avedon: Photographs 1946–2004 will also present a selection of vintage magazines in which Avedon published—Vogue, Harper's Bazaar, Rolling Stone, and The New Yorker—that show how his eye functioned in a journalistic sense, and how the photographs appeared in their original context.

The exhibition is accompanied by a major publication, Richard Avedon: Photographs 1946–2004 (hardcover, 192 pages, $70), which will be available at the SFMOMA MuseumStore. Published by The Louisiana Museum of Modern Art, Denmark, in association with The Richard Avedon Foundation, the volume includes 125 reproductions of important works in the exhibition, as well as a complete chronology and texts by exhibition curator Helle Crenzien, Geoff Dyer, Judith Thurman, Michael Juul Holm, Rune Gade, Jeffrey Fraenkel, and Christoph Ribbat.

During the run of the exhibition, SFMOMA will feature the film series inspired by Avedon's life and work. Presented in the Phyllis Wattis Theater, the showcase will include feature-length films relating to the book collaboration between Avedon and James Baldwin called Nothing Personal (1963–64), which focuses on themes of civil rights, the cold war, and major cultural figures of the day.

Richard Avedon: Photographs 1946–2004 is organized by The Louisiana Museum of Modern Art, Denmark, in cooperation with The Richard Avedon Foundation.

The San Francisco presentation is made possible by generous support from The Bernard Osher Foundation, Nion McEvoy, and Credit Suisse Securities (USA) LLC, and Paul and Anne Wattis.
Media Contacts

New admission prices starting May 30, 2009: adults: $15; seniors and students: $9; SFMOMA members and children 12 and under: free. Admission is free the first Tuesday of each month and half-price on Thursdays after 6 p.m.