Allen Ruppersberg's vast oeuvre includes paintings, prints, photographs, sculptures, installations and books that explore the intersection of art, literature, and life. His work is often participatory, and he finds source material in the everyday. In the project room, Nicole Cherubini presents new sculptures that reference the history of clay as a medium and feature forms made of terracotta, earthenware, and porcelain and surfaces arrived at through various hand-built, thrown and molded processes. 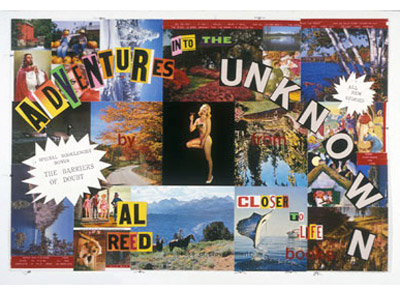 “We are delighted to present this exhibition at SMMoA,” states Elsa Longhauser, Executive Director. “Al is a ‘vernacular anthropologist’ whose artistic interests and sensibilities have been indelibly shaped by the spirit and ethos of Southern California.”

Ruppersberg’s vast oeuvre includes paintings, prints, photographs, sculptures, installations and books that explore the intersection of art, literature, and life. His work is often participatory, like that of Allan Kaprow and others, and he finds source material in the everyday. Ruppersberg’s vast collection of early to mid-twentieth-century cultural ephemera–which includes calendars, snapshots, magazines, comic books, newspaper clippings, postcards, posters, and instructional films–form the basis of much of his recent work.

As a teacher and artist, Ruppersberg has also influenced several Los Angeles artists of the generation following his, including, most notably, Jim Shaw and Mike Kelley, whose works also deal with the American vernacular. East Coast artist Rachel Harrison, who incorporates a deluge of cultural debris in her sculptures–celebrity magazines, costume jewelry, canned goods, and wigs–has acknowledged Ruppersberg's importance in the development of her own work. Ruppersberg has always had a strong, independent vision shaped first by growing up in America's heartland and also by spending months and years living and working in New York and Europe, where his work has been shown in an array of major museums.

Two new large-scale installations in this exhibition continue to expand Ruppersberg’s use of imagery culled from his vast archive of twentieth-century ephemera. The Never Ending Book Part 2/Art and Therefore Ourselves (2009), is a selection of more than 15,000 pages of Xeroxed images from the artist’s book collection, installed in a stage-like environment made of theatrical props and early twentieth-century mural-sized vintage posters. The pages are stacked in approximately fifty small cardboard boxes designed by the artist. These duplicated pages are free for the taking. In this way, Ruppersberg makes his library available to each audience member who can subsequently create his or her own unique “book” to take home. As part of this project, Ruppersberg has created a 33 RPM vinyl LP record, which functions as an oral analog to the books on view. The record includes old songs and hymns, spoken word recordings, recipes read by poet Bill Berkson, and people singing around the piano, all dating from the early to mid-20th century.

For the second installation, The Sound and the Story/The Hugo Ball Award for 20th Century Graphics (2009), photocopied and laminated items of everyday ephemera from Ruppersberg’s extensive collection are suspended from a wall of pegboards. Viewers are invited to rearrange the materials on the pegboard to create their own narrative. During the run of the exhibition, Ruppersberg will periodically respond to these arrangements by reorganizing the items himself, thus creating a visual conversation with his audience “co-producers.”

The exhibition also includes a selection of earlier collages and drawings–two-dimensional works from important series The Gift and the Inheritance (1989), and Cover Art (1985); both of which provide an historical backdrop to the new installations.

Allen Ruppersberg: You and Me or The Art of Give and Take is organized by the Santa Monica Museum of Art. Guest curator of the exhibition is Constance Lewallen, Adjunct Curator at the Berkeley Art Museum and Pacific Film Archive.

The publication that accompanies the exhibition was conceived by Ruppersberg as an artwork in itself, and is a cross between a traditional catalog and an artist’s book. Based on a 1956 edition of travel guide The Guest Informant, it is spiral-bound and cardboard-covered. The publication contains essays by renowned author and cultural critic, Greil Marcus, and guest curator Constance Lewallen, along with an interview with and commentary on the artist, random ephemera, and exhibition information. It is co-published by JRP|Ringier, Switzerland. The new vinyl LP record will also be available in a limited edition of 200.

Major support for the exhibition and publication is provided by The Andy Warhol Foundation for the Visual Arts. Additional funding is provided by LLWW Foundation, the Frederick R. Weisman Philanthropic Foundation, the Pasadena Art Alliance, and Margo Leavin Gallery. Related programming is made possible in part by a grant from the City of Santa Monica and the Santa Monica Arts Commission.

In her first West Coast Museum exhibition, artist Nicole Cherubini presents new sculptures that reference the history of clay as a medium and feature forms made of terracotta, earthenware, and porcelain and surfaces arrived at through various hand-built, thrown and molded processes. New forms are accompanied and supported by materials such as wood, MDF, 2x3s, digital photographs, metal, glaze, enamel, and drawing materials.

Cherubini’s work brings antiquated notions of ceramics into a contemporary sculptural discourse as they invoke ideas rooted in conceptual art from the 1970s. The new ‘box’ pieces presented at SMMoA come from a continued interest by Cherubini in movement, process, containment, and structure. These sculptures reference the cardboard pieces of Robert Rauschenberg, the material use of Robert Morris, ideas about physical space addressed by Donald Judd, and Eva Hesse’s ability to challenge the 2-D and 3-D.

Cherubini’s large container is based on a Greek storage vessel from 500BC in the collection of the Metropolitan Museum, New York. Made of clay in multiple sections, it has no base and is filled with holes in defiance of its function. Barely glazed, most of its surface is raw, exposed, dry clay.
Attached to this sculpture is a framed manipulated digital c-print of an 18th Century watercolor of The Portland Vase by T. Hosner Shepard. This vase, in the collection of The British Museum, London, was famously broken in February 1845 by an Irish university drop-out, William Mulcahy, who destroyed the vitrine and smashed the vase with a stone sculpture displayed nearby. Cherubini has drawn over this image with paint, graphite, and ink, depicting the shards before the piece was reconstructed.

Cherubini uses the cardboard box in which manufactured clay comes as a mold for an object placed on a tall pedestal base. The collapsed, flaccid ‘box’ is turned on its flattened side, adorned with pools and drips of glaze. Marks created by the mold and finger fully illustrate the process of its making, exposing both inside and out to the viewer.

A large plywood pilaster, full of knots and cracks, displays brightly glazed hanging terracotta ‘boxes’. These are glazed with intense semi-precious colors of lapis, turquoise, malachite, cobalt, and rose quartz. Their earthy and organic textures vary from high gloss to matte, and are texturized with shimmery sediment and crystals mixing in the firing process. A larger 5-sided clay ‘box’ stands on its side nearby, made from white clay with a matte white glaze.

Cherubini was born in Boston in 1970. She received her BFA in Ceramics from the Rhode Island School of Design and her MFA in Visual Arts from New York University, and later attended the Skowhegan School of Painting and Sculpture in Maine. She is a recipient of an NEA Travel Grant, a New England Foundation for the Arts Fellowship in Sculpture, the Louis Comfort Tiffany Foundation Award, and most recently an Art Matters Grant for travel in Mexico. Her work has been exhibited in group and solo exhibitions both internationally and in the United States; including the Institute of Contemporary Art, Philadelphia; the Walker Art Center, Minneapolis; Santa Barbara Contemporary Arts Forum, Santa Barbara, CA; Sculpture Center, New York; La Panadería, Mexico City; PS1/MoMA, New York; The Rose Art Museum, Boston; Samson Projects, Boston; and Galerie Michael Janssen, Berlin. Last fall, she had concurrent exhibitions at Smith Stewart Gallery and D’Amelio Terras in New York. Cherubini lives and works in Brooklyn, New York.

Nicole Cherubini is organized by the Santa Monica Museum of Art and curator Lisa Melandri, Deputy Director for Exhibitions and Programs.


Tell Me Something Good: A Collaboration between Kim Schoenstadt and Rita McBride
September 12 - December 5, 2009

Inspired by the conceptual art exhibition Art By Telephone (Museum of Contemporary Art, Chicago, 1969), in which participants phoned in their specifications for their works of art, artists Kim Schoenstadt and Rita McBride will exchange instructions to create their respective artworks in their first two-person U.S. Museum exhibition. Tell Me Something Good: A Collaboration between Kim Schoenstadt and Rita McBride opens at the Santa Monica Museum of Art on September 12 and will be on view through December 5, 2009.

The original 1969 Art By Telephone was curated by Jan van der Marck. Its basic premise was to invite international and out-of-state artists to phone instructions that would be executed bymuseum installers. Schoenstadt and McBride have created their ‘exchange’ as a variation of the 1969 project, with each phoning the other with instructions for a work. At SMMoA, Schoenstadt will create McBride’s work according to the instructions - photographs of all the gas stations along California Highway 1 between Los Angeles International Airport and Point Dume. McBride was asked by Schoenstadt to choose a discarded drawing from her studio and load it into a fax machine, then ask the Gallery to fax the floor plans of their proposed exhibition space. The combination of interposed drawing and architectural plan provided the final composition. This work was shown at New York gallery Alexander and Bonin from May 9 through June 13, 2009.

The project takes up the "telephone game" idea of transforming visual information into language and back to visual, and also embraces the conceptual promise that 'anyone' can make an art work based on the idea of the systemic production of art according to instruction. In the current era of instant messaging and social media, Schoenstadt and McBride use the telephone as a means of communication to initiate their conceptual works that explore the ramifications of what happens when an artist gives up control over his or her project. With its focus on collaboration and exploration of the nature of authorship, this exhibition is the perfect complement to the Allen Ruppersberg exhibition, which runs concurrently at SMMoA.

Schoenstadt received a BFA from Pitzer College, California, and has participated in many solo and two-person exhibitions and projects in Europe and the U.S., including the Museum of Contemporary Art, Chicago, and the Institute of Contemporary Art, London. Her body of work centers around the exploration of drawing, and frequently includes series in which the final product is arrived at by chance or by instructions provided either via the audience or other artists; her works are often site-specific. Schoenstadt lives and works in Venice, California.

McBride received a BA from Bard College, New York, and an MFA from California Institute of the Arts, Valencia. She is the recipient of many awards and residencies, including the prestigious Guggenheim Memorial Foundation Fellowship (2002). Her projects vary greatly from unorthodox books to large-scale sculptures. Her work has been shown at the SculptureCenter, New York, and she has had several solo museum exhibitions throughout Europe. McBride lives and works in Düsseldorf, Germany where she is a professor at the Kunstakademie Düsseldorf.

The catalog accompanying the project is a recording of each artist’s instructions on a vinyl record, just as it was for the original 1969 Art By Telephone. The record will be playing in the Project Room as part of the installation; a limited edition of signed copies will be available for sale. Tell Me Something Good: A Collaboration between Kim Schoenstadt and Rita McBride is organized by the Santa Monica Museum of Art and curator Lisa Melandri, Deputy Director for Exhibitions and Programs.