The Large and Small Effects of Structure, Its Presence and Absence. An exhibition that brings together painting, sculpture and installation by five artists interested in abstraction as a day-to-day experience. On display: Claude Collins-Stracensky, Mari Eastman, Erik Frydenborg, Noah Sheldon, Torbjorn Vejvi. 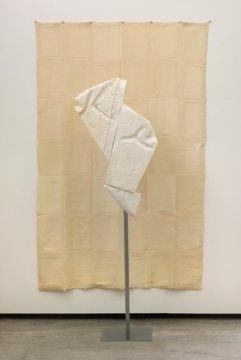 Cherry and Martin presents Bellows and Whispers: The Large and Small Effects of Structure, Its Presence and Absence. An exhibition that brings together painting, sculpture and installation by five artists interested in abstraction as a day-to-day experience.

The exhibition Bellows and Whispers: The Large and Small Effects of Structure, Its Presence and Absence brings together the work of five artists interested in abstraction. While abstraction as an art historical category is relevant for some of the artists, all of the artists included in the show are interested in the abstract as a day-to-day experience. These artists use the process of considering something independent of its fixed associations as a method to test the overarching structures that guide viewers through artworks. Confident, yet unexpected or incomplete structures can create interesting situations, and while interpretation is what art is all about, of course, the generally-speaking paratactical syntax of the works in this exhibition--a technique in which ideas and images, usually disparate, are placed side-by-side without clear connection--here forces viewers to navigate obliquely in order to come to the conclusions implied. At stake is a sense of mystery, the evocation of memory, a questioning of concreteness and a sense of things less well defined. The resulting artworks facilitate new ways of seeing the world outside of the art context as well as new structures with which to examine the artworks themselves.

Claude Collins-Stracensky fashions sculptural works that model modes of perception while activating the looking and sensing process. Using glass and mirrors, painted paper and objects--some seemingly derived from Ikebana forms--Collins-Stracensky's pieces are orchestrated situations that expand upon thorough investigation by the viewer.

An artist equally interested in abstraction and representation as painterly forms, Mari Eastman presents a piece that combines three stretched-canvas paintings with mark-making directly on the wall. We read the resulting combination as a perfect representation of a beautiful and baroque interior scene, our comprehension of the work is colored by our expectations and willingness to fill in the abstract formal and iconic blanks in our mind's eye with material of our own devising.

Erik Frydenborg contributes several works incorporating distorted molds of various objects pulled from his working environment--textbooks, corrugated cardboard, and other readily available materials--faithfully replicating their textures and surface details. Frydenborg's pieces, however, tend to read like abstract forms, despite being literally exact indexical representations of the objects cast. In a sense, they function inefficiently as depictions of those objects, for the slippage between what the molds actually are and what we tend to think they are--based on the clues embedded in the grammar orchestrated by Frydenborg--creates a sense of the enigmatic, rather than one of certainty.

Noah Sheldon supplies a recording on pressed vinyl of a string quartet performing a piece by Hayden. When the record is played, listeners discover that Sheldon has provided the musicians with the notes of the piece and their sequence, while omitting all information relating to the notes' duration or rhythmic value. The musical sequence depends on the interpretation by the musician of the information before them and our own interpretations as audience members for the work.

Torbjorn Vejvi's wall works and free-standing sculptures use non-mimetic signs such as the frame and the figure-ground relationship in mysterious ways that elicit, yet dodge, art-historical precedents, while at the same time occupying the space provided by these precedents as a kind of arena or stage. The colors, techniques, images and forms in Vejvi's works are familiar and apparent, yet the relations we perceive between them and the conclusions we draw from them are anything but.

Claude Collins-Stracensky is the subject of an upcoming Hammer Project at the Hammer Museum. Mari Eastman's work has been included in such exhibitions as The Undiscovered Country (also at the Hammer), as well as exhibitions at Karyn Lovegrove Gallery (Los Angeles), Sies and Höke (Düsseldorf), Sprüth Magers Projekte (Munich) and Nicolai Wallner (Copenhagen). Erik Frydenborg has recently participated in exhibitions at Christian Nagel Gallery (Berlin), CAEP/Platform China (Beijing) and Bonelli Contemporary (Los Angeles). Noah Sheldon just finished a project at Yautepac Gallery (Mexico City) and was included in Ensemble, curated by Christian Marclay, at the Institute of Contemporary Art (Philadelphia). Torbjorn Vejvi has exhibited his work in recent exhibitions at Raucci/Santamaria Gallery (Naples), Leo Koenig (New York) and was a part of the influential exhibition Mise en Scène at the Santa Monica Museum of Art.