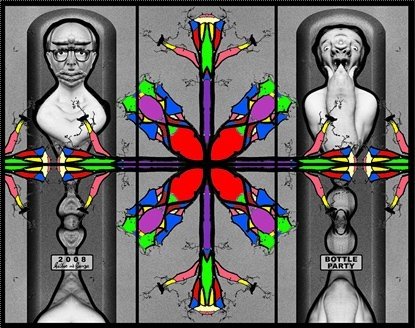 "The Jack Freak Pictures are amongst the most iconic, philosophically astute and visually violent works that Gilbert & George have ever created..."
Michael Bracewell

Galerie Thaddaeus Ropac is pleased to announce its upcoming exhibition of the most extensive group of pictures produced by Gilbert & George to date. In the Jack Freak Pictures Gilbert & George continue to portray life and the cityscape as experienced by the archetypal modern man and to delineate the morals of human existence, from the profound to the rudimentary.

The iconic red, white and blue design of the Union flag is pivotal in these pictures with individual connotations for each viewer; its ambiguity incites a multiplicity of interpretations. The pictures are also punctuated by a collection of recurring elements, including trees, street maps and brickworks, found within reach of their East London studio and in any urban environment. The medals that appear within these pictures, whether homogenous commemorative emblems or personalized decorations, provide their own narrative, accentuating occasions of pride or patriotism and acting as a counterbalance to the potential relentlessness of everyday life. The Union flag design is intermixed with circles and rosette motifs, which underpin and consolidate the art, arranged and rearranged to create a complex and vivid visual language of the past, present and future.

As in all of their art, the artists themselves are again protagonists; vehicles to hint at future contemporary life, both from a spiritual and material point of view. They are depicted expressionless and 'expressionful' as the embodiment of normality, in perpetual progression towards an inevitable fate, perhaps simply a commentary on man's mortality.

The title of the Jack Freak Pictures possibly refers to the provocative and heady existence that modern man is subject to, at once vulnerable to the uncertainties ingrained in modern society as well as the progressive fusion of the ideas of national and personal identity. The prevailing interpretation of the Union flag is inverted when juxtaposed with the word freak, generally associated with social ostracism.

Gilbert - born in 1943 in the Dolomites, Italy - and George - born in 1942 in Devon, England - both studied art before they met in 1967 at Saint Martin's School of Art in London. At the end-of-year-show, the Snow Show, Gilbert and George created their first art as a joint effort, far removed from the formalist criteria of the art taught. In 1969, they created their first Singing and Living Sculptures, in which they are both subject and object of their art - refusing to disassociate their art from their everyday lives. They appeared in museums and galleries as "living sculptures", including their famous Underneath the Arches. The pictures dating from 1971 are the first grid-arrangements, which would henceforth become their formal signature. In the 1980s their imagery becomes more complex, incorporating endless levels of meaning - from the symbolic and allegorical to the overtly sexual, religious, political and personal.
Gilbert & George have worked as one artist for over 40 years and produced more than 2000 artworks.

Their first retrospective exhibition took place at the Stedelijk Van Abbemuseum in Eindhoven showing their pictures of 1971-80. The Musée d'art moderne de la ville de Paris in 1997 hosted a major retrospective exhibition of their art. The most recent and extensive survey of Gilbert & George's art was organised by Tate Modern in London in 2007 and toured to Munich, Turin and three venues in the United States. In 2005, Gilbert & George represented Great Britain at the Venice Biennale. And very recently, they have been made Honorary Professor of Philosophy by London Metropolitan University.

A fully illustrated catalogue with an essay by novelist and cultural critic, Michael Bracewell accompanies the exhibition.

Galerie Thaddaeus Ropac is pleased to announce the upcoming exhibition of works by Lee Bul, widely acknowledged as one of the most eminent Korean artists of her generation. The Drawing space will be dedicated to new works on canvas and paper, which can be thematically grouped into two groups according to the proximity of their relationship with her previous work.
The first group show a direct visual affiliation to the artist's suspended architectural sculptures, notably the After Bruno Taut (2006-2007) and the Sternbau (2007) series, elaborate hybrids made of crystals, glass, acrylic, and metal. These sculptures are a product of the artist's recent philosophical exploration of 20th century cultural history. According to Lee Bul the sculptures, evoke the spirit of Bruno Taut, a progressive German architect most renowned for his temporary glass domed pavilion erected for the 1914 Cologne Werkbund Exhibition. Lee Bul drew inspiration from Bruno Taut's ambition to visualize his dreams, applying his "love of lightness, transparency, organic form" to realize an ameliorated, fantastical world.
The second group are further removed from the sculptural work that precedes them, venturing away from the artist's ongoing preoccupation with the human form as both a material and social entity, towards dystopian topographies and the individual's inclination to aspire to an unobtainable perfection.

Born in 1964 in Seoul, Lee Bul was initially academically trained in sculpture but her interest quickly diversified into other techniques including performance art. She incorporated her own body, contradicting general perceptions of idealized human appearance, sexuality, gender, and rebuking the repression of women within a patriarchal society. Her installation entitled Majestic Splendor (1997) at the Museum of Modern Art; rotting fish encrusted in sequins, a commentary on the ephemeral nature of beauty and the powerlessness of women, caused a furore and affirmed her global reputation as an intrepid emerging artist.
Much of her attraction lies in her ability to bring together diverse themes, at once traditional, contemporary, provocative and timeless. Lee Bul remains internationally respected and highly sought after.
Extensive solo exhibitions have been held at the Kunsthalle Bern (1999), the BAWAG Foundation Vienna (2001), the San Francisco Art Institute (2001), Le Consortium Dijon (2002), the New Museum of Contemporary Art New York (2002), The Power Plant Toronto (2002), The Museum of Contemporary Art Sydney (2004), The Fondation Cartier Pour l'Art Contemporain, Paris (2007).

For further information regarding this exhibition, please contact Elena Bartolotti at +33 1 42729900, elena@ropac.net

Harun Farocki
Counter Music and On Construction of Griffith's Films

The oeuvre of German film maker Harun Farocki amounts to nearly 100 feature films, essay films, documentaries, and installations that explore global, economic, social, and cultural developments. The exhibition in Paris will present Farocki's installations On Construction of Griffith's Films, taking up a sequence from D.W. Griffith's film Intolerance (1916), and Gegen-Musik/Counter Music, 2004. Both films are double projections. Harun Farocki himself describes their specific features as follows: "In a double projection, there is succession as well as simultaneity, the relation of an image to the one succeeding it as well as to the one next to it." Therefore, the mere coexistence of the two projections is not sufficient to definitively delineate the relationship of the images being shown. It is up to the viewer to recognize the different elements in correspondence.

In his installation On Construction of Griffith's Films, Harun Farocki elaborates on a sequence from D.W. Griffith's film Intolerance (1916). It shows a conversation between a man and a woman, filmed and edited as a shot and a counter shot. Farocki produces this sequence on two monitors. This innovative method of narration, using a shot and counter shot to film dialogues was still relatively groundbreaking at the time of production. "My intention was to create a film laboratory, to show as much as possible of the structure of a film, a film genre, or a style with as few interventions as possible. With the figure of a shot and counter shot that has now existed for ninety years and occurs in almost every film and every sequence, the narrated space is divided in two parts. I wanted to demonstrate this disassembly by showing the shot and counter shot images on two different monitors." (Harun Farocki).

Gegen-Musik/Counter Music (2004) studies the existing surveillance techniques within a city environment and the visualization process of the images being captured. The regulation of the urban setting by operative images is of interest to Harun Farocki, who aims to, '"remake" the city films, but using different images. Farocki explains the process saying that, "Limited time and means themselves demands concentration on just a few chapters, fragments, or preliminary studies."

Harun Farocki was born in 1944 in Neutitschein (located in the part of Czechoslovakia that was annexed by Germany at the time). He studied at the Deutsche Film-und Fernsehakademie Berlin between 1966 and 1968 and now lives and works in Berlin. Farocki was both editor and author of the magazine Filmkritik for ten years. Since 1974, Farocki has lectured in Hamburg, Munich, Düsseldorf, Stuttgart, Vienna, Berlin, and Berkeley among other cities. Since the mid-nineties his works have increasingly been shown at international art institutions. The Frankfurter Kunstverein (2001), the Stedelijk Museum voor Actuele Kunst Gent (2002), the Institute of Contemporary Arts London (2003), the ZKM Karlsruhe (2004), Index - The Swedish Contemporary Art Foundation Stockholm (2006), and the Museum Moderner Kunst Wien (2007) have held solo exhibitions of Harun Farocki.

The exhibition "H F | R G", on Harun Farocki and Rodney Graham is being held at the Jeu de Paume in Paris until June 7. The show constitutes a retrospective of the work of these two important contemporary artists, presenting 35 and 16mm film installations, numerical projections, large format photographs, large scale light boxes, conceptual and sculptural works.