10 editions. Taking place in several venues in Lyon city and its suburban areas, the Biennale, with works by about 60 artists from different parts of the world, will be structured as a multi-dimensional system that reflects both intellectually and physically the dynamism and complexity of the thesis - the Spectacle of the Everyday - itself. More and more artists are magically turning the ordinary into novel forms, meanings and usages while innovative collective mobilisations are brought to the forefront as a more democratic structure of art practices and their social functions. There will be 4 chapters and a special section. Curator Hou Hanru, artistic director Thierry Raspail. 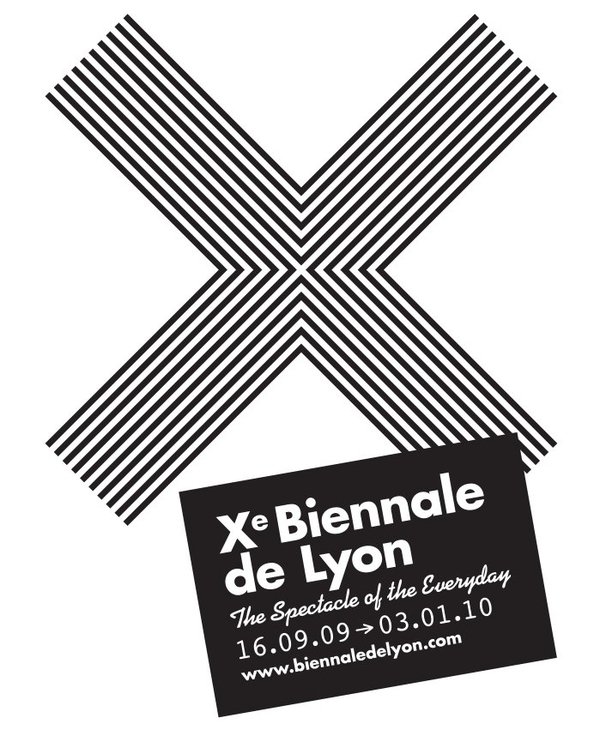 In the age of globalisation, it is not enough for contemporary art to become a spectacular phenomenon embraced by almost all people in all corners of the world. It's even more important to testify that artists and art communities from different parts of the globe are increasingly sharing the common understanding and strategies to reinvent themselves through engagements with the realm of everyday life. More and more artists are magically turning the ordinary into novel forms, meanings and usages while innovative collective mobilisations are brought to the forefront as a more democratic structure of art practices and their social functions. They are the core of the global art and culture scene today. Through intensely presenting and promoting these initiatives using the most efficient tools, including spectacular events like international biennials, truly innovative and relevant contemporary art practices will obtain a much larger visibility and help us build a new, genuinely public space for our era.

After 20 years of existence and growth, the Biennale de Lyon is now facing a new challenge to reinvent itself. Exploring and presenting the new tendency of the global art scene in its common efforts to reinvent the ordinary into something spectacular and unique, or a new multitude of expressions of diversity, complexity and interactivity, the Biennale itself will certainly reach a new youth. And it's the best recipe to confront the current crisis that the whole world is entangled with…

The Spectacle of the Everyday is fundamentally changing both the spectacle and the everyday!

Taking place in several venues in Lyon city and its suburban areas, the Biennale, with works by about 60 artists from different parts of the world, will be structured as a multi-dimensional system that reflects both intellectually and physically the dynamism and complexity of the thesis – the Spectacle of the Everyday – itself. There will be four chapters and a special section:

1 The Magic of Things, or the reinvention of the everyday.
This section focuses on artists who “magically” transform everyday objects, situations and environments into new forms with innovative significances, new aesthetic visions. These in turn are making various statements on life events from personal, social, historical and even political perspectives.

2 Celebrating the Drift.
Inspired by the Situationist strategy of drifting (dérive) and confronting the contemporary urban transformation (as a process of the formation of new spatial orders dominated by the current globalisation), artists from different parts of the world are moving into, intervening on and exploring urban spaces, especially streets, in diverse forms and strategies, in order to resist the dominant orders and spatial constraints and to claim new liberties of action. It opens up doors towards trans-disciplinary collaborations.

3 Another World Is Possible.
In the age of globalisation and the current troubles with the global economic and geopoliti- cal systems, it’s crucially important to investigate and encourage different, independent and alternative initiatives and actions in terms of critically re-examining reality and envisioning new social orders and systems for a better life and a better world. For the last decade, a considera- ble number of artists and social activists across the globe have been expressing energetically and critically their engagements in such a challenge. This chapter intends to introduce some exemplary projects that demonstrate such engagements, at once individually and collectively, subversively and playfully...

4 Living Together.
Mainly installed in the Museum of Contemporary Art, this chapter intends to turn the museum into an open platform for dialogues and exchange with the city, with local and other communi- ties. In the meantime, a few works in the collection of the museum (or formerly exhibited in the museum) that functioned in this sense will be reactivated to put forward the memory of the site as living experiences. The very tension between the opening towards reality and memory of the site will ultimately generate an ongoing and ever-growing programme of various events – music, dance, happenings, debates, conferences, etc...

5 Veduta.
Closely related to the section of “Living Together”, several artists will be invited to reside in the suburban areas with a large immigrant population, which are known for their historic events such as Mouvement des Beurs, anti-racism rallies, etc. The artists will collaborate with the local population and produce new works to be exhibited in both the residency sites and the Biennale venues, notably in the museum...

HOU HANRU
Curator, Biennale de Lyon 2009
Born in 1963 in China, Hou Hanru is Director of Exhibitions and Public Programs and also Chair of Exhibition and Museum Studies at the San Francisco Art Institute.an Artistic Director. He is based in Paris and San Francisco.

Résonance
From September to December 2009, some 80 art centres, private galleries, cultural institutions and artists’ collectives will team up with the Biennale de Lyon 2009 to create Résonance. Stemming from a call for projects, and conceived to span the Rhône-Alpes region, the event consists of more than 125 exhibitions and a cross-disciplinary range of performances. Résonance also publishes a catalogue (print-run: 30,000), available in all Résonance and Biennale venues. “La Nuit Résonance”: Thursday 19 November 2009
In more than 30 locations, late openings, exhibition first nights, concerts, performances and walkabouts are on the programme on Thursday 19 November, from 6pm. In addition, several art centres (based in Villeurbanne, Saint-Fons and Vénissieux) will present programming specific to the Galerie des Terreaux (an arcade off Place des Terreaux, Lyon 1) and to La Plateforme (a boat venue on Quai Augagneur, Lyon 3).

Veduta venues
Vaulx-en-Velin, Villeurbanne and Décines in collaboration with the Grand Parc, Lyon and Vénissieux.