Stadtstaat. A Scenario for Merging Cities

A Project by Metahaven 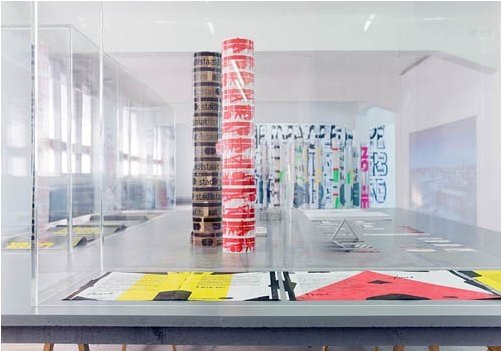 "Stadtstaat" explores the interlocked, equivocal relations between contemporary models of governance and their visual identity, by taking an imaginary city-state as a case study. This city-state is the result of the unlikely merger of two distant cities in different countries: Stuttgart and Utrecht. The scenario for such a fictional state is considered amidst the setting of contemporary geopolitical conditions-the
economic downturn, the increasing prominence of "networking," "partnership," and "alliance" as replacements of sovereignty, and the growing demand for cities to globally compete for visibility.

The project proposes branding and other representational models for the "Stadtstaat" that unfold in an actual policy experiment. The design is applied as an act of constructing a visual horizon, imagining the impossible to seek the possible. This "reversal" process of forming a political, governing entity creates a speculative space of reflection. Various levels of perception and understanding of the operation of a city and nation, in relation to the space-structuring effects of new information technologies, are played out. The graphic "surface" becomes visible as a platform that turns communication into political interaction.

The project centers around the formation of the exhibition space as a spatial assemblage of the various visual and representational items of the "Stadtstaat." They are based on research into the specific situation of the respective cities and their existing visual identities. The conceptual approach of the project is also informed by Metahaven‘s ongoing investigation into new informational procedures, such as encryption and compression. More than just a matter-of-fact situation describing the informational technocracy which surrounds us, procedures of encryption and compression raise fundamental questions about identity, communication, the access to information and the changing role of the designer. "Stadtstaat" reflects on these and other usually hidden mechanisms, and the space that they create.

"Stadtstaat" is co-produced and presented by Künstlerhaus Stuttgart and Casco Office for Art, Design and Theory in Utrecht. The project will unfold into two episodes at two venues.

Metahaven is a studio for research and design based in Amsterdam and Brussels, consisting of graphic designers Daniel van der Velden and Vinca Kruk, and architectural designer Gon Zifroni. Since 2004, Metahaven has developed projects that investigate the political potentials of graphic design and its expanding practice as a tool for research. Metahaven’s previous projects include the "Sealand Identity Project," a research into a national brand for a micronation and tax haven, and "History Vs. Future" which investigates the House of People in Bucharest and its double existence as a post-communist icon and contemporary art museum. Metahaven’s work is exhibited as part of the traveling exhibition "Forms of Inquiry: the Architecture of Critical Graphic Design" at the Architectural Association, London, and in "On Purpose: Design Concepts" at Arnolfini, Bristol, "Since we last spoke about monuments" at Stroom, The Hague, and "Affiche Frontière," a solo exhibition and poster project at CAPC, musée d’art contemporain, Bordeaux.

Metahaven members lecture widely, and its members teach at institutions including Yale University in New Haven, the Academy of Arts in Arnhem, the Sandberg Institute in Amsterdam, and the School of Visual Arts in Valence, France.