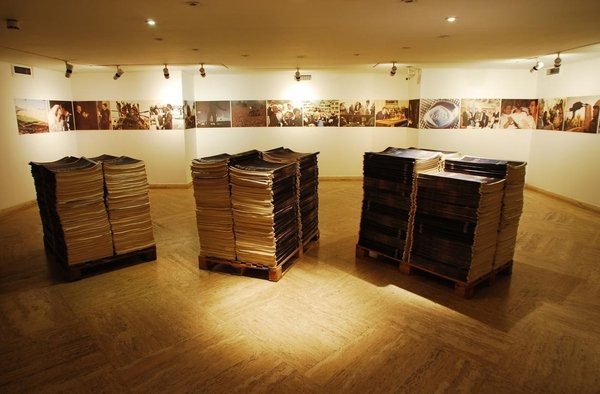 The exhibition Collection Dubai brings together works by artists that involve practices of collecting, or of accumulating material that is then presented in a gathered format. This ranges from artists who consistently photograph the same type of environment to create a very tight series of images, to others who have collected found material that clearly works together in a collection of like messages or references and finally to those who follow one idea so succinctly within their practice that their ongoing output in itself clearly forms a collection. The other half of the title: Dubai; is intentionally ambiguous and is included in order to question the titling of something as broad and diverse as a collection of art; in this case with regard to a specific collection* that the exhibition's participating artists have been invited to include their work in, even if they have no contact with the city or its newly formed art initiatives.

The title therefore questions what it means to use a regional tagging device, in this collection's case as a verifier and a commercially understood entity. The inclusion of the name Dubai also in part refers to the current trend of copying and accumulation that is taking place in the UAE, which, by extension, the work of Lamya Gargash references. In her series of photographs Familial Gargash obsessively brings together a collection of lesser-known imagery from the Emirate's, the bedrooms and lobbies of its local 'one star' hotels, offsetting the Dubai tag's usual analogies of style and glamour.
Amsterdam based artist Fahrettin Örenli has been invited to present a new installation of his fanatically created drawings and photography that form part of his ongoing research into conspiracy theories that often stem from the EU's strategies of integration and the West-East oil pipeline. In contrast two works by Sophia Tabatadze are theoretically collections, but exist as the only element of a potential ongoing practice.

An installation of three videos from Hüseyin Bahri Alptekin's series Incidents present hundreds of images taken in three locations in which disparate tales are woven together to present the touching impression of how individuals can control and organise one moment in space and time, as the world continues its activities around them. Ivan Moudov's Fragments is an incredible assemblage of collected parts taken from different artworks that Moudov found in various museums, galleries and art centers in Europe. The suitcases that contain Moudov's collection act as a portable museum that traces a precisely selected artistic heritage. In contrast Tarek Zaki's History of O gathers a group of mundane circular objects that are cast to look like rare and valuable archeological artefacts. As Mamali Shafahi works on 2500 collages that hint at the many truths, lies, tensions and ambiguities that exist in and surround Iran; Nasan Tur's installation Good News presents in a newspaper format a sample of infamous media images that at the time of going to print illustrated stories telling only good news, but which in retrospect have not always encountered such happy endings.

*The initial motivator for the framework of the exhibition was to consider the structure of the Artist Pension Trust (Dubai), an initiative that offers selected artists the opportunity to invest works into regional collections in a shared scenario of risk diversification and mutual participation. These collections are temporary and variable as works are committed and sold over a forty-year period and ultimately all the works are dispersed.