Textiles Art and the Social Fabric

A large-scale group exhibition of artists who use textile materials or related concepts in their work. With a conceptual rather than medium-specific focus, the exhibition features several different kinds of work including sculpture, installation, tapestry, books, banners, photography and film. This medium's potential to communicate complex layers of social meaning and address the political as it appears in subjects such as labour, culture, identity, protest and display. 'Useful Life europalia.china' is a key exhibition in the development of contemporary Chinese art, which it has acquired in its totality for its collection. Lonely at the top: Viktor Misiano selected some artistic points of reference he considered most crucial in the dynamic Central Asian states and in the Caucasian countries. Collection XXIV: some recent acquisitions, including works by such Indian artists as well as Belgian artists past and present. 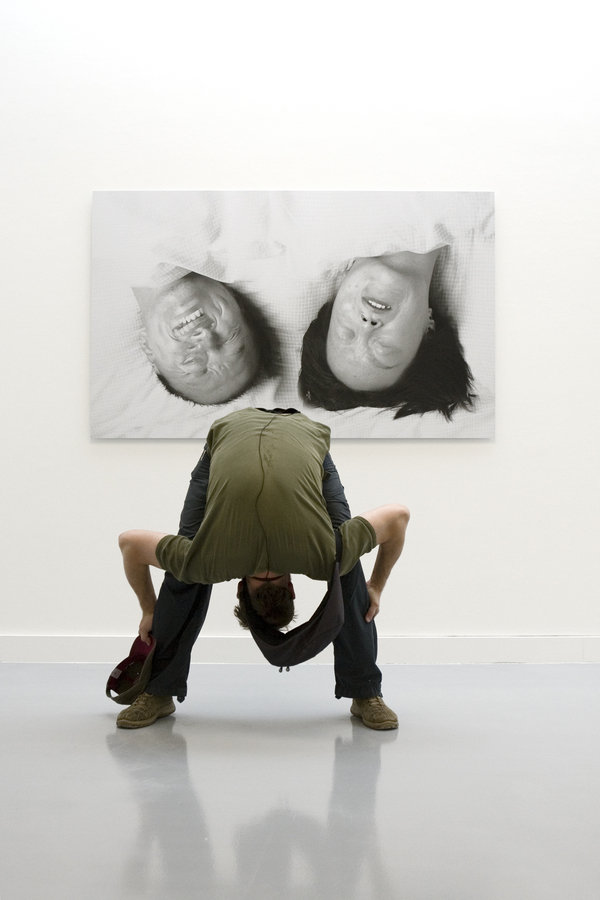 Thursday 01 october 2009 at 19:00h
Artist talk by Joke Robaard (NL) and interview with Seth Siegelaub (US lives in Amsterdam) (Founder of the Amsterdam based Centre for Social Research on Old Textiles)

Sunday 15 november 2009 at 14:00h
In the context of the exhibition, the MuHKA has invited Champ d'Action to create a musical project that relates to the subject matter of the exhibition.
Just like 'textiles', music is often based on an invisible grid onto which the sound is woven. This is certainly the case for Crippled Symmetry by Morton Feldman, in which the deviations from this grid, crippled symmetry, become the subject for the composition. Choreographer Marc Vanrunxt will create a new solo to accompany this performance with dancer Etienne Guillauteau.

Thursday 10 december 2009 at 20:00h
A collaboration between students of textile design at Sint-Lucas Hogeschool in Gent and students of dance will result in the production and demonstration of Hélio Oiticica’s Parangolé capes, made using his Do It Yourself Parangolé instructions. + Performance by artist Stefanie Seibold in collaboration with Teresa Maria Diaz Nerio revolving around the costume politics of musician Sun Ra (presented by If I Can’t Dance, I Don’t Want To Be Part Of Your Revolution).

In the context of europalia.china, MuHKA will be presenting a key exhibition in the development of contemporary Chinese art, which it has acquired in its totality for its collection.
The Useful Life exhibition comprises important work by three leading Chinese artists and was created in the ShanghART Gallery at the Shanghai Biennale in 2000. It was during this Biennale that for the first time artists were given hope of more openness from the government and also the first time that foreign artists were allowed to participate.
The MuHKA’s intention in acquiring and showing this exhibition is to spotlight this crucial moment.

This season we shall be presenting work from major cultural regions about which we know little. This will take place in the LONELY AT THE TOP rooms on the 5th and 6th floors. Since the collapse of the USSR, the European horizon in that direction has remained limited to Russia. We know very little about what is happening in the dynamic Central Asian states and in the Caucasian countries with ancient cultures. The Russian critic and theorist Viktor Misiano has for several years been working to support the artists of this region, which has resulted in some controversial exhibitions.
He selected those artistic points of reference he considered most crucial, which included key works by the artists concerned. These works are shown in ensembles and will ultimately also be incorporated into the museum’s collection. The first presentation is of work by Dmitry Prigov, the recently deceased dissident, conceptual artist and poet from Moscow, and the Uzbek artist Said Atabekov. Prigov’s avant-garde work is at the same time the starting point for the whole series.

In recent years the MuHKA has been working hard on the cohesion of its collection. The museum now makes intensive use of the collection, sending its works out to cultural centres and libraries all over Flanders this summer, as well as major displays of works from the collection in Charleroi, Havana and Singapore this autumn.
The collection has been inventorised and has been given a global perspective. This is clearly apparent from some recent acquisitions, including works by such Indian artists as Boran Hansda, as well as Belgian artists past and present, and the entire USEFUL LIFE exhibition, which gave Europalia’s focus on China permanent roots in the Flemish art heritage.
This year, the upper rooms of LONELY AT THE TOP have also been drawn into these collection activities, with a series of presentations of artistic approaches from Central Asia and the Caucasus.
Artists: James Lee Byars, Leo Copers, Hans Eijkelboom, Pieter Engels, Jan Fabre, Jef Geys, Vincent Geyskens, Boran Hansda, Job Koelewijn, George Lilanga, Guy Mees, C.K. Rajan, Walter Swennen, Wilfried Vandenhove.