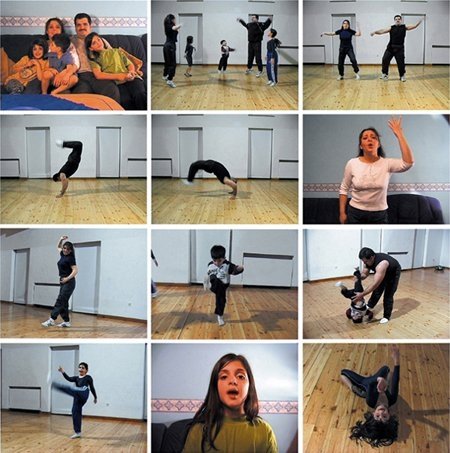 We cordially invite you to attend the opening of the exhibition Signs of Respect on 3 September 2009 at 7 p.m. in the former Kubi-Center, Am Veringhof 23b, 21007 Hamburg, hosted by Gerti Theis (IBA Hamburg), Harald Falckenberg (art collector) and the exhibition's curators Ute Vorkoeper and Andrea Knobloch.

This exhibition had not been scheduled before the Akademie einer anderen Stadt (Academy of another city) was founded on 1 April 2009 on Hamburg's Elbe islands, whose complex residential mix, wealth of potential and conflicts are characteristic of all large cities in Germany today. Rather, as all programmes run by the Academy, this idea evolved in the course of discussions with and in response to wishes voiced by residents of the Elbe islands. It subsequently chose the "Kubi-Center" complex, a former corporate administration building with a floor space of over 2000 m2, as the venue to foster a dialogue between international art and art projects generated in schools and community cultural groups which seeks to address a broad and varied audience.

The exhibition focuses on issues of particular relevance for the Elbe islands but elsewhere too – concerning the plurality of languages in the city, the search for individual cultural identity, the visibility (or invisibility) of certain cultures and the opportunities for bringing pressing questions and problems to public attention.

People in large cities have always been divided, and are now increasingly so, by different experiences of displacement from the old, of new departure and arrival in unfamiliar surroundings, of being marginalized or squeezed between larger interests. Such ruptures are voiced in the drawings of Katrin Ströbel and the installations of Marina Lindemann. The process of arrival in a new language is described by Swedish-speaking immigrants in a video installation by Esra Ersen and by the children's voices recorded over the years by Antoine Beuger. In the films of Dorothea Carl women migrants speak of their lives in intermediary worlds, while Moira Zoitl allows viewers to inspect the real non-places where migrants find themselves stranded from time to time. Olafur Gislason translates stories of migration into three-dimensional space and Helga Scheffler shows carefully preserved slides documenting her experience of Hamburg's great flood of 1962.

The gap "in between" is also the subject of numerous school projects, whose titles Wer ist Lurup? (Who is Lurup?), Fantasy World, Bunny Hood, MyPlace and Fluid Rooms point to the clashs of real and imagined urban contexts. Thomas Köner traces the transient paths of people in peripheries scattered across the globe, while Dieter Boxberger, Anke Grube and Desiree Zick, scholarship students of the VHS Summer Studio, go in search of evidence in Hamburg harbour. Many people express a desire to finally appropriate a space and a time of their own – such as the space where one can show oneself and be seen which has been constructed by pupils of the Wilhelmsburg Gesamtschule (comprehensive school), who gave their exhibit the challenging title "wir hier!" (us here!). Unexpectedly singular modes of self-portrayal were also devised by the prison inmates Mark Raidpere invited to take part in a photo shooting. These are flanked by attempts to enhance understanding, foster dialogue or even exchange as proposed by Rainer Ganahl's models for learning language or Nina Katchadourian's paradoxical endeavours to eliminate accents and Christine Lemke's analyses of current materials for teaching German.

Cultural dialogue feels lighter, on the other hand, in the dance video by Nevin Aladag titled "Familie Tezcan" (The Tezcan family). With "Zürich rührt sich" (Zurich stirs), Andrea Knobloch also considers how space can be achieved through dance, while Hanswalter Graf offers examples of his playful strategies for transforming urban space which he carries out in collaboration with young people. Besides this, Harald Lemke invites visitors to explore his gastrosophic library as a means of promoting dialogue between various food cultures, while Thomas Wiczak's urban research undertaken with kids from the Elbe islands makes an unexpected appearance in the exhibition.

The exhibition's title was likewise the result of discussions with residents of the Elbe islands. Most of the old and the new problems here are due to a lack of respect and an inadequate degree of consideration, or merely restraint, towards those who have too little money, influence and means of articulation to effectively and noticeably voice their opposition. It is about the respect for those who since the 1960s have suffered the worst abominations of urban planning, inordinate levels of noise pollution and the dangerously close proximity to (occasionally also intolerably stinking) industrial plants, and now, via fast-track legislation, are suddenly being rushed into a better future by means of projects tabled by the IBA International Building Exhibition.

The works in this exhibition, on the other hand, are marked by the particular respect they show – each, of course, in its own distinctive way – towards what is different, what is encountered on the ground, what is longed for and what is unfamiliar. The exhibition assembles tokens of a different form of respect, as portents if not declarations of a better and more just future...