Fountain. The 7-minute film is a poetic and linguistic study of the readymade and Marcel Duchamp's last work Etant donnes (1946-66). At the same time, it addresses the particular relationship between language and art. In her art, the artist reflects on the act of making art, the content and production of meaning through art and the relationship between art and life. 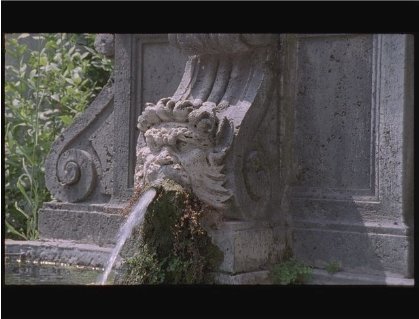 Fountain is a new film from the Welsh artist Bethan Huws, which premieres at the daadgalerie. The 7- minute film is a poetic and linguistic study of the readymade and Marcel Duchamp's last work Étant donnés (1946-66). At the same time, Fountain addresses the particular relationship between language and art.

In her art, Bethan Huws reflects on the act of making art, the content and production of meaning through art and the relationship between art and life. In the early 1990s, Huws became known internationally for her boats each made of a folded blade of rush which were exhibited like miniature sculptures. Within the context of art, this, a Welsh child’s game transforms into a quiet but powerful gesture that underscores the imagination and personal memory space of art through a material manipulated by human hands. Here Huws’ specific approach to the readymade and the work of Duchamp becomes apparent. Huws considers Duchamp both a turning point in Western art history, and the starting point for her own artistic practice. Rather than as a gesture of institutional critique, Huws sees the readymade as a source of artistic possibilities. Thus Duchamp’s step of generating meaning through a conceptual act forms a crucial basis for Huws’ own work.

Huws has long used language both to restrict and expand the production of meaning in art. In Fountain she analyzes Duchamp’s use of idiomatic expressions in a poetic form on the level of the spoken text and confronts it with shots of Roman fountains at the level of the image. The gap between image and text allows Huws to explore the layers of meaning and the implications and evocations of art. Ultimately, every meaningful artistic expression in Fountain runs the risk of faltering through a deliberate, unexpected or unintended connotation.

Excerpts from Huws’ storyboard and research notes will be on display along with Fountain, offering a deeper insight into her explorations of Duchamp.

Bethan Huws (b.1961 in Bangor, Wales) studied in the 1980s at the Royal College of Art in London and now lives in Paris and Berlin. In 2007, she was a guest of the DAAD’s Berlin Artist Programme. Huws works have been exhibited at numerous international institutions, including solo exhibitions at the Tate Modern, the Bonnefantenmuseum in Maastricht, the Kunstmuseum St. Gallen, the K21 in Düsseldorf and at the Serralves Museum in Porto in 2009. She has also recently participated in group exhibitions at the Hayward Gallery, the Tate Modern and Tate Britain, London, the Hamburger Kunsthalle and the Marta Herford Museum.

Fountain is produced by Dieter Association Paris, the Serralves Museum of Contemporary Art, and the Berliner Künstlerprogramm / DAAD