From the F.C. Gundlach Collection 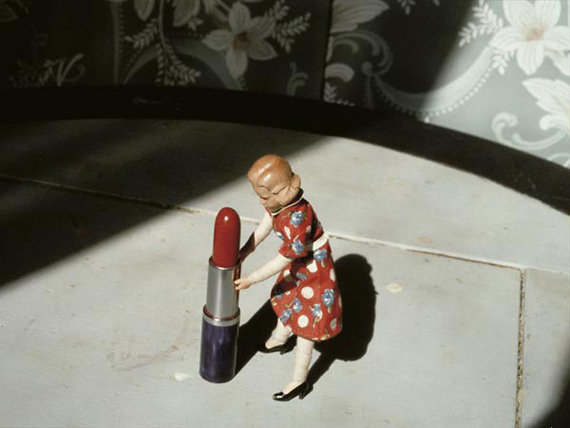 An exhibition of the F.C. Gundlach Foundation commissioned by the Museum für Angewandte Kunst and the Fotografie Forum Frankfurt

Every fashion needs its room. Fashion is three-dimensional by definition: it covers the body, it forms, exposes or conceals the body, brings out certain parts of the body and makes others disappear.

Yet fashion is ephemeral and needs photography to ensure its survival. In the process, fashion's spatial dynamic is transferred to the two-dimensional plane of the photographic exposure. The perception of the original fashion room changes, and new interpretations are introduced. The real space - the street, the shop window or the catwalk - is joined by societal, culturally encoded rooms.

The exhibition Fashion Room presents photographic strategies for the staging of fashion in space and conceives the term "room" as the model of a conceptual space extending far beyond the space described by architecture. Every fashion photograph shows the era-specific perception of fashion, and with it the underlying relationships between fashion, culture and society. The selection Fashion Room from the F.C. Gundlach Collection, however, is not limited to fashion photography in the classical sense. A chief focus of the exhibition is the dialog of the photographic moment: the interaction between fashion, space and pictorial surface over the course of time and photographic history.
An important selection process was to choose series of works. Preference was given to examples which transport conceptual meaning within the series. Series by such photographers as Martin Badekow, George Hoyningen-Huene, Imre von Santho, Franz Roh or Wols dating from the 1930s to the 1950s constitute the chronological beginning, and are followed by works of Ralph Gibson, Saul Leiter, Zoe Leonard, Gjon Mili and Melvin Sokolsky of the 1960s and 1970s. Works by Katharina Bosse, Robert Heinecken, Chris Moore and David LaChapelle round out the presentation.

The works selected reveal the photographers' diverse approaches. Melvin Sokolsky's well-known "Bubble Series", taken for Harper's Bazaar in Paris in 1963, is a striking commentary on the photographic act of staging fashion in space. Sokolsky had his favourite model Simone d'Aillencourt pose at distinctive sites in Paris, thus placing the haute couture designs within a context of the city's flair. At the same time, however, in her Plexiglas sphere, the model remains visually and physically isolated; Paris becomes a stage set. This interplay between proximity and inaccessibility, between the two-dimensional and the three-dimensional, ultimately creates an awareness of the "re-presentative" function of the photograph and the distance between the subject and the viewer.
In contrast, Gijon Mili's and Frank Horvat's photographs initially defy location in space. The figures are cut out; their surroundings remain unclear. Through the arrangement of the folds of the graphically expressive design, however, Mili and Horvat succeed in creating spatial structures within the fabric that serve to convey an impression of the coats' volume and cut. This strategy of abstraction culminates in the series by James Welling, in which he stages pictorial spaces by photographing folds of fabric.
Saul Leiter works with the spatial effects of extreme perspectives by photographing layers of fabric and optical distortions of the figure and garment. Even if he crops the view, the location can always be fundamentally recognized: a street and a bill-board stand for the urban metropolis; a make-up mirror, for the intimate interior.
However similar the works of Katharina Bosse and David LaChapelle deal with fashion, they have contrary strategies for the treatment of space and perspective.
Whereas the locations of Katharina Bosse's shots remain general, the spatial situation confined, the figures pushed into a corner - also with regard to their poses -, the photos of LaChapelle place the fashion and the models into the context of clearly recognizable architectural structures. In the latter works, the generous openness of the gestures reinforces the expanse of the space and draws attention to the luxury and glamour of the clothing designs.

The photos by Imre von Santho of the 1930's, characterized by their wealth of contrast and George Hurrell's hand-coloured scenes of the 1940s can be understood as examples of colour and light rooms in the studio.
Imre von Santho illuminated simple paper backdrops and geometric surfaces with studio spotlights, thus creating light spaces for his rigorous black-and-white fashion shots. The poses and gestures of the models are set against light surfaces, shadows and shades of grey tones create spatial depth.

George Hurrell, known for his portraits of Hollywood movie stars, likewise remained in the studio for his fashion photos. There he made use of projection and multiple exposures and contrasted the chromatically subdued clothing designs with hand-coloured chromatic spaces.

In keeping with the creed of the F.C. Gundlach Collection, the exhibition also encompasses conceptual and artistic approaches in which clothing played a role. Harry Callahan's photographic depictions of shop windows, for example, react to the visual fascination of fashion and mannequins behind glass. Although they are corporeal in quality, it is not allowed to physically touch due to their placement behind the pane of glass. Reflections in the glass moreover obscure the spatial situation and create a mysterious atmosphere in which reality and fiction merge. This theme is enhanced by shop-window shots of various other photographers, some viewing the shop-window decoration from the outside, others the window-shopper from within.

Heinrich Riebesehl's series of "People in Lifts" is rooted in the tradition of Henri Cartier-Bresson's or Helen Levitt's subway scenes. Since the photos were taken with a hidden camera, the subjects were unaware of being observed in the confined, intimate space of the lift interior. These images present clothing in everyday life in a completely natural manner. Forty years later, these photographs transport the tastes of the past era all the more distinctly. Their conceptual rigour have become documents of everyday design.
The series "Neufünfland" by Hans Pieler, as well as Bernhard and Anna Blume's four-part Wahnzimmer develop the show's argumentation further. Finally, Fashion Room presents the extreme opposites to classical fashion photography with the series by Ruth Hallensleben and Grant Mudford, which primarily expose the the reciprocity of fashion, design and architecture.

The F.C. Gundlach Collection
In their selection of photographs for the exhibition FASHION ROOM, the curators had numerous possibilities for the staging of fashion and style at their disposal in the extensive holdings of the F.C. Gundlach Collection. F.C. Gundlach (b. 1926), one of the most prominent fashion photographers in the Federal Republic of Germany, built up his collection "Menschen in der Photographie" ("Image of the Human Being in Photography") over several decades, developing it into one of the world's most important private photo collections. The collection's core holdings found a new home when the "Haus der Photographie", founded by F.C. Gundlach, opened in the southern Deichtorhalle in Hamburg. In 2006, with the exhibition "The Heartbeat of Fashion", F.C. Gundlach presented the first comprehensive exhibition on fashion photography from his collection.