This chronological retrospective brings together nine empty exhibitions by Yves Klein, Art & Language, Robert Barry, Robert Irwin, Stanley Brouwn, Bethan Huws, Maria Eichhorn, and Roman Ondak. The principle of the exhibition is to present only exhibitions where the space is left rigorously empty, without the addition or subtraction of anything, thus excluding, for instance, shows or works involving the modification of lighting, the installation of sound, the construction of partitions or the exclusion of the public. Accompanying events: a performance by Ben Vautier, a screening of films, a listening session by Francis Baudevin, and a concert. 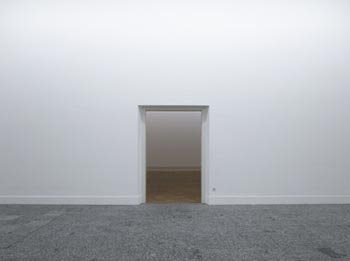 Yves Klein's 1958 emblematic exhibition 'The Specialization of Sensibility in Raw Material State into Stabilized Pictorial Sensibility', which was subsequently referred to as The Void, is widely considered as a turning point in modern art history. The empty space exhibited as such thus became, in a way, a classic of radicalism, and would be repeated and remade in other contexts, other places and other times by other artists whose intentions might be similar, different or even opposed to Klein's.
The principle of the exhibition at the Kunsthalle Bern is to present only exhibitions where the space is left rigorously empty, without the addition or subtraction of anything, thus excluding, for instance, shows or works involving the modification of lighting, the installation of sound, the construction of partitions or the exclusion of the public. And it is no part of its goal to reconstruct the original physical space, as rather than representing the historical void by the artists, the retrospective - working closely with the artist and their estate - considers the void itself, and not the architecture that hosted the void.

Also, all forms of historical documentation or memorabilia related to the original exhibition (such as posters, photos, invitations, photo-documentation, press reviews, original texts) are excluded from the exhibition; all such elements being included in the exhaustive catalogue published alongside the exhibition, edited by the curators John Armleder, Mathieu Copeland, Mai-Thu Perret, Clive Phillpot, Gustav Metzger, together with Laurent Le Bon and Philippe Pirotte.

Each void offers a different reading of the empty space, representing, perhaps, a claim, a renunciation, or, indeed, a celebration of the museum or gallery's space. Contemplating emptiness, one confronts nothingness and absence, the invisible and the ineffable, destruction and negation. VOIDS are offered for what they are, and for what they allow. This accumulation of empty spaces, similar in appearance but radically different in reality, has echoes and implications beyond its walls. More than a radical and conceptual exhibition, the retrospective is an invitation to explore and experience, in a very physical manner, the different texture of each different space. The visitor encounters the empty exhibitions now in 2009, exactly 40 years after 'When Attitude Become Form' organised by Harald Szeeman when director of the Kunsthalle Bern. It was such exhibition that enabled this retrospective to be, and one could dream that with the voids, the attitudes, literally, are the forms.

This exhibition brings together the work of artists who have attempted this extreme gesture, to exhibit without showing an object, without making any intervention but a single announcement. The exhibition begins with Yves Klein's 1958 exhibition, and from then on envisages how entirely empty exhibitions have defined different kinds of emptiness, sometimes as a means to signal sensibility as for Klein, sometimes as the peak of a conceptualist or minimalist practice as with Robert Barry's 'Some places to which we can come, and for a while "be free to think about what we are going to do (Marcuse)"' (1970). Sometimes as the desire to explore our understanding of exhibition & exhibition spaces as for Art & Language's 'Air Conditioning Show' (1966-67), or in the case of Robert Irwin's 'Experimental Situation' (1970) as the appraisal of the space, and the affirmation that there is no such thing as nothing. Sometimes as the desire to empty an institution & focus on the experience of walking through it as for Stanley Brouwn, or with Laurie Parsons' exhibition at the Lorence-Monk Gallery in New York in 1990, announced by a card bearing only an address, with neither dates nor the name of the artist, as a means to announce the artist's complete withdrawal. Sometimes as the affirmation that there is no need to introduce in a space a work of art as it is already there, as with Bethan Huws' 'Haus Esters Piece' (1993). And again as with Maria Eichhorn's 'Money at the Kusnthalle Bern' who in emptying the Kusnthalle in 2001 worked with the void out of necessity, devoting the exhibition budget to the renovation of the building. And sometimes it is the means to remind us that the most important aspect of any void is the notion of trust and belief, as with Roman Ondak's 'More Silent Than Ever (room fitted with eavesdropping devices)' (2006), a piece that deceives the public in making one believe that there is more when indeed there is nothing.

In this respect, from the search for a renewal of perception, through political or ideological statement, to the deconstruction of the very principle of exhibition, these exhibitions pose a range of crucial questions about the role of the institution, and this unprecedented marshalling of eloquent emptiness within the Kunsthalle Bern represents a true challenge to the institution.

For an unprecedented exhibition, a unique curatorial team. VOIDS, A RETROSPECTIVE, which is both an exhibition in the most traditional sense and an art event in its own right, has been put together by John Armleder, who has always been interested in nothing; Gustav Metzger, a key figure in auto-destructive art, Mai-Thu Perret, a young conceptual artist, Mathieu Copeland, a curator who explores the limits of the exhibition, Clive Phillpot, a writer; together with Philippe Pirotte, director of the Kunsthalle Bern.

Accompanying and simultaneously to the retrospective at the Kunsthalle Bern, the Museum Haus Lange, Krefeld, will be entirely empty and open to the public for a week (20th - 27th of September) as an invitation to visit Yves Klein's 'Raum der Leere', a permanent void realized in 1961.
Accompanying events will also include an evening of performance by Ben Vautier, a screening of films curated by Stuart Comer, a listening session by Francis Baudevin, and "Absenz - (k)ein konzert" a concert by Ensemble Neue Horizonte. For more information on dates and locations in Bern on all these events, please refer to the website.

VOIDS, EINE RETROSPEKTIVE is coproduced by the Centre Pompidou, Paris, and the Kunsthalle Bern.

He recently told us that 'Less is More, but I prefer Nothing'! It is therefore with great pleasure that we welcome Ben Vautier to realise a too rare performance by this Fluxus hero and ever so influential artist for an evening considering nothing and the void. Performing his own pieces intertwined with pieces taken from the extensive Fluxus repertoire, Ben creates a program that look into the apparent impossibility of doing nothing, and furthermore (or rather furtherless), on stage. A fascinating event that will cast a beautiful light on what his mother used to tell him, that there is no such thing. Ben Vautier was born in Naples, Italy, on the 18 July 1935. He lives in Nice France. Mathieu Copeland and Philippe Pirotte