The Royal Box. The show presents his unapologetic exploration of human nature, relationships and desires. His performances filmed and edited for single-channel video will accompany objects realized in sculpture, photography and collage. 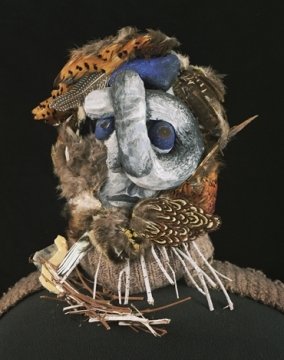 For Brian Bress, point of view is a shifting and multi-layered relation that invokes not only how we negotiate our interactions with others, but also how we negotiate our interaction with ourselves. Bress employs a variety of narrative structures ranging from the traditional to the paratactical, manipulating pictorial and sculptural convention and theatrical staging, as well as the editing approaches of both television and film. The result is an ever-changing situation in which expectations are exposed and assumptions are overturned. In one scene of Bress's new thirteen-minute video, Because It's the Depression, a masked man in a patterned suit replete with piano-key themed cuffs and lapels says, "My job is to make you feel comfortable." How we interpret this offer is our choice, but whatever our choice, it is affected by Bress through of a series of vignettes and an accumulation of disjunctive shifts.

A familiarity with disjunctive shifts allows Bress to use the characteristics of a time-based approach to full effect. The possibility of thinking and re-thinking the straightforward until it no longer seems so is basic to the artist's practice; mundane products and images in Bress's work come to animate a fragmented landscape inhabited by a range of unmoored characters more often than not engaged in a shattering of self. Loss, mourning and a raw yearning for change lead the way for Bress's sensitive picking through of the essentials of our normative yet fragmented consumer-based identities, suggesting, for example, through the title of his video, that states of mind are as apt for economic or scientific analyses as they are for psychological ones.

Whereas previous works focused on the artist as a stand-in for the individual in society, Bress's newest body of work focuses more on the relations between the individuals that make it up (all of whom are played by Bress himself in various guises). What at first seems humorous, satirical and performative, transitions into a poignant, voyeuristic investigation of interpersonal relationships. Creating characters that expose themselves through signifiers such as their occupations, Bress abstractly and concretely explores the formation and deterioration of personalities and relationships.

Bress has exhibited nationally in venues and exhibitions including Against The Grain, Los Angeles Contemporary Exhibitions, Los Angeles (2008); Stalemate, LeRoy Neiman Gallery, Columbia University School of Arts, New York (2007); and Zach Feuer Gallery, New York (2007). His video Under Cover (2007) was included in the 2008 survey exhibition and catalog California Video: Artists and Histories at the Getty Museum, Los Angeles. He received his MFA from the University of California, Los Angeles and BFA from Rhode Island School of Design.