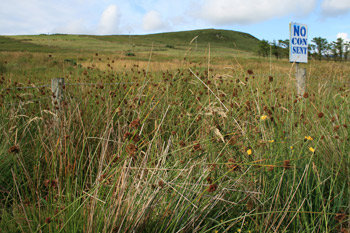 This solo exhibition looks at the 10 year struggle between two cultures in the West of Ireland. On one side, a small community defends the safety of its people and rights of its farmers and fishermen. On the other, the consortium of Shell Oil, the Norwegian state company Statoil and Marathon, plan to bring to market the valuable gas deposit of the Corrib gas field, off the North-West coast of Ireland. To achieve this, a production pipeline is being laid to carry the high pressure gas inland, to a processing plant in Mayo, exiting the Atlantic Ocean and reaching the Irish Coast at Glengad and Rossport.

The artist Séamus Nolan researches the positions – community, corporate and judicial – which frame the debate in this highly contentious situation, and which were stated formally during a recent public hearing, restaged and filmed by Nolan. The various voices of the local community are heard: community leaders – teachers, farmers and retired citizens argue against the operation, citing risks to the safety of the people in the community as well as ideological objections, while a re-enactment of the statement of the Shell lawyer argues that there is very little appropriate risk, and outlines the steps taken by the conglomerate to address the community's concerns.

Boiling behind the backdrop of the argument are ideas of nationhood and identity – invoked by those who claim historical rights to working the land and seas, and contested by those who make the case for the benefits to the Irish economy and future energies infrastructure. Glimpsed between the lines are the actions and involvement of the Irish state and the use of the police, to defend the developers and maintain the production schedule.

In previous works, Nolan has sought to explore the socially determined frontiers of the art world by contesting the foundations on which judicial decisions are made. With Corrib Gas Project Arts Centre, the artist implicates a non-aligned centre for art and culture in the debate, challenging through this action the autonomy and political independence that is a founding principle of most artistic organisations.

by Tessa Giblin and Jonathan Carroll:

The Irish Government’s legislation relating to the exploration of natural resources has changed greatly in the 23 years that divide two significant discoveries of natural gas off the Irish Coast. The Kinsale Head gas field discovered in 1973 along with subsequent explorations, prompted new legislation to be introduced in 1975, 1985, 1987 and 1992 prior to the discovery of the Corrib Gas field in 1996, off the northwest coast of Ireland. When economically beneficial proposals begun by then Minister Justin Keating in 1975, who was influenced by the model of the highly profitable Norwegian State-owned company Statoil, were abandoned, Ireland’s financial stake in the future of gas as a natural resource was gradually eroded. Mike Cunningham, a former director of Statoil Exploration (Ireland) remarked, “No country in the world gives as favourable terms to oil and gas companies as Ireland.”

In 1996 the licence for the Corrib Gas field was granted to Enterprise Energy Ireland, a subsidiary of Enterprise Oil, which was since bought out, in 2002, by a consortium including Royal Dutch Shell (45%), Statoil (36.5%) and US based Marathon Oil (18.5%). They are the exclusive owners of the gas, and exempt from royalty payments to the Irish State as negotiated by former Minister Ray Burke. Their profits will be taxed in Ireland at 25% - lowered to this level from 50% by then Finance Minister Bertie Ahern in 1992. Taxation will only be applied once all capital investment costs have been recouped. Other countries with natural gas deposits provide a stark contrast, with Norway taxing at 78% and Venezuela at 65.7%. The total value of the gas extracted in the Corrib gas project and other explorations in the region is projected to be upwards of €50 billion, little of which will flow into the Irish economy.

The laying of a gas pipeline to bring raw gas ashore for processing on land has caused major disputes and disruption in the area of Rossport, culminating in the jailing of five local residents for breach of a court injunction instructing them to honour a 2002 piece of legislation, which allowed private companies to obtain compulsory acquisition orders on private land. The five spent 94 days in prison in 2005 and their incarceration led to the founding of the Shell to Sea campaign to protest and lobby for change in the Government’s attitude to this unprecedented project. Shell to Sea as well as other organisations such as Pobal Chill Chomáin and Pobal Le Chéile, insist that they are primarily concerned for their health and safety and consider the Corrib Project’s insistence on processing the gas on land, as opposed to an offshore facility, as unnecessary and dangerous.