Featuring works by Mark Lewis, Irina Botea, Jeremy Deller & Mike Figgis, Omer Fast, Christian Jankowski, Aernout Mik, Joao Onofre, Julika Rudelius, Krassimir Terziev, and Clemens von Wedemeyer a force field is presented between background action formed of manipulatable, human material, on the one hand, and the consciously acting individual on the other. Furthermore, an investigation of social power relationships and their place in the community is stimulated here. The exhibition is in cooperation whit the Siemens Arts Program. 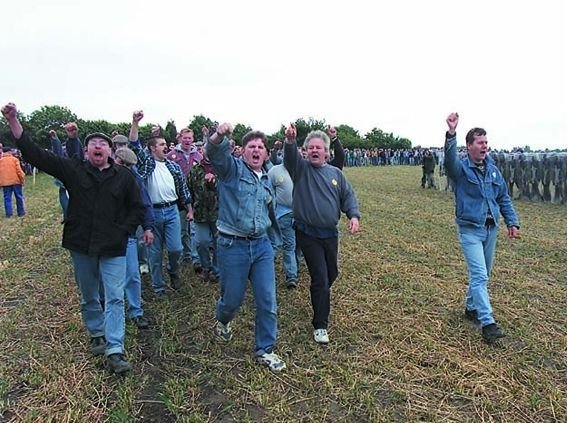 The idea for the exhibition "Actors & Extras", a cooperation between the ARGOS Centre for Art and Media and the Siemens Arts Program, is based upon the contradistinction between actors and extras. Featuring works by Mark Lewis, Irina Botea, Jeremy Deller & Mike Figgis, Omer Fast, Christian Jankowski, Aernout Mik, João Onofre, Julika Rudelius, Krassimir Terziev, and Clemens von Wedemeyer a force field is presented between background action formed of manipulatable, human material, on the one hand, and the consciously acting individual on the other. Furthermore, an investigation of social power relationships and their place in the community is stimulated here.

Extras fight in the army, sit in cafés, chant songs in stadiums, crowd into subway station or stand as onlookers gawping with morbid fascination at a murder victim. They are a common dramaturgical means to make the action in theater and film look more alive and realistic. Without doubt extras are performers just as actors are. Yet there are differences: actors are employed to take on a key role while extras must do the opposite. Their task is to be inconspicuous and to act en masse, as a majority, as a quantum or a kind of visual flock. From the artistic perspective this paradox, which sees the figure of the extra as a passive background embellishment, can be understood as a social and/or political allegory. Furthermore, the paradox also offers the actor/extra a means for interpreting the human condition characterized by an ambiguous relationship betweenthe "self" and the "non-self": man as a free "being thrown into the world", on the one hand, and a being conditioned by culture and society, on the other.

The exhibition approaches this paradox from a strictly cinematographic perspective. The four-minute video "The Pitch" where Canadian-born artist Mark Lewis focalizes the low appreciation accorded to extras in the history of film can be seen as a kind of introduction into the topic. He resolutely suggests producing a film which puts those people in the spotlight who normally remain anonymous as extras on the periphery of the action.

In "Background Action" dating from 2006/2007 Bulgarian artist Krassimir Terziev directs our attention to 300 extras from his native country thus also focalizing the lowly position of extras. In 2003 the Bulgarian extras for the production of "Troy", one of the costliest Hollywood films ever made, were flown to Mexico. Recruited as an "elite group" that met the physiognomic ideal of the ancient warrior they were primarily cheap labor. Terziev highlights the exploitative structures and exploitation of the poor in the film industry.

In his work "Casting" João Onofre creates a constant interchange of extra and actor by allowing young models to individually approach the camera while looking at each other and giggling in a group.

Focalizing the power relationship between actors and extras in her work "Rites of Passage" German artist Julika Rudelius documents conversations between high-ranking representatives from American politics and ambitious interns. In her stage-managed discussions Julika Rudelius juxtaposes the interns' expectations with the way politicians see themselves - politicians who in the routine exhibition of their professional experience and power are perceived as both leading the people and deluding them.

The video "Spielberg's List" by Omer Fast can be understood as a similar sociopsychological experiment. Ten years on from the shooting of Steven Spielberg's film "Schindler's List" the Israeli artist returns to the Krakow film location and interviews the city's inhabitants who played as extras in the film. The difference between scenery and actual scene is not only barely recognizable in the landscape, the stories told by the extras based on memories from the 1940s and from when the film was shot also blur. Reality and fiction are very difficult to distinguish. With his work Omer Fast shows how mediatic images greatly affect our memory and sometimes overlay it demonstrating the memorial-like function now assumed by film in terms of collective memory.

Collective memory is also a focus of the two reenactments "The Battle of Orgreave by Jeremy Deller & Mike Figgis and "Auditions for a Revolution" by Irina Botea. Here events are processed which are imprinted on collective memory. In Jeremy Deller's 2001 film directed by Mike Figgis over 800 people, amongst them many former miners, reenact the 1984 Battle of Orgreave in South Yorkshire that formed the climax of the bitter year long Miners' Strike against the British government. In her work Rumanian artist Irina Botea has American students reenact a telerecording on the Rumanian revolution. The problems the actors have in pronouncing Rumanian are striking metaphors of the difficulty we face when reading history.

A documentary approach of the topic is shown in "Raw Footage" by Aernout Mik. It features documentary "side scenes" or to be more precise those unsensational scenes of daily life during war where people wait like extras smoking, hanging around, and watching.

For his film "This I played Tomorrow" German artist Christian Jankowski questioned waiting people outside the famous Italian film studio Cinecittà. He confronted them here with questions from Fellini's "8 ½" and asked them to tell him the roles they would like to play. The documentation of these interviews forms one part of the work. The other consists of a short film that Jankowski shot with these same people. He let the "extras" make their own interview contributions in the film, in roles they chose for themselves.

The exhibition is supplemented by the film-set installation "Basler Podest" by German artist Clemens von Wedemeyer. For the so-called "list" Wedemeyer built a studio stage on which a tipped-over chair, a second upright one and some scattered sheets of script can be seen. In front of this a running camera is set up and a monitor shows the action. Wedemeyer allows observers to step into the action to create a story probably to be played out on the stage. There is no clear final denouement to this.

Image: The Battle of Orgreave, A television documentary by Mike Figgis of an artwork by Jeremy Deller, 2001. © Co-commissioned by Artangel and Channel 4.