Rapture. In this exhibition the artists strike a balance of their art and life thus far, to which they gave a shape over the last several years. Not only do they recall their former statements on the essential questions of the present, but they give an interested audience an idea of their further development. Artists Anonymous announces in their typical antinomic manner, they switch the weight of their creative research into a direction of self-awareness. 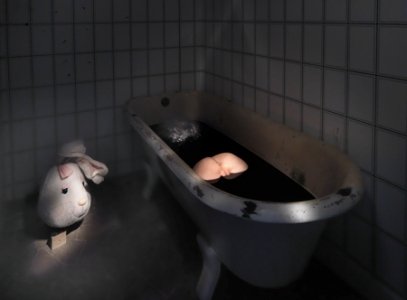 With the exhibition RAPTURE in the new rooms of the WHITE SQUARE GALLERY in Berlin the artist group, ARTISTS ANONYMOUS, announces its homecoming from London to the German capital.

In this exhibition – beginning fall 2009 – the artists strike a balance of their art and life thus far, to which they gave a shape over the last several years. Not only do they recall their former statements on the essential questions of the present, but they give an interested audience an idea of their further development.

With their already‐given statement about this exhibition, ARTISTS ANONYMOUS announces in their typical antinomic manner, they switch the weight of their creative research into a direction of self‐awareness. It’s not the harsh criticism of the environment that takes the centre spot, but rather, it’s the search for a space in it.

An important hint is given through the exhibitions title, RAPTURE, which in this case stands less for theme, then more for existence which includes a modern, active position in life.

One could describe this condition as “relaxed tension”, that is what the artists plead for. Not to think the group has run out of ideas, with which they could make us reflect. There are still plenty. What is being thematized and lived here, is just a shift of ones own perspective, which gradually happens as one evolves, as a human and as an artist.

Though the perspective might change, the main goal of artistic research stays put: Since their founding year in 2001 the artists mainly dealt with question of origin, spirit and purpose of art. Even the name of the group is a product of intense thinking about the role and place of an artist, an artist that is set to seek two things: deliver your own personality and give yourself to art up to the point of total anonymity.

An antinomic thinking and acting already became a trademark of the group; their logo is the perfect example. Negative and positive, provocative and settle, naive and ruthless, rational and emotional are only a few of the never ending list of opposing couples, that not only determine the work but also the life of the artists. They have a perfect feeling for playing with opposites, never do these opposites negate or ruin each other, they rather create something new and unknown. Something that is not only artistically aesthetic, but also always true to life and real.

Logical consequence is that the dealing with human reception is the key element of their creative studies, especially concerning the selection of media and theme. The artists rely on the results of modern scientific reception research and modern day technology.

The realization that an objective colour reception is completely impossible, made ARTISTS ANONYMOUS develop their own artistic method, to offer the recipient the whole spectrum of reception possibilities, piece by piece. The successive change and inversion of shape, colour, technique, light settings and material sets the initial point for an elaborate and systematic composition: the negative painting is transferred on its photographical counterpart and afterwards printed on a negative photo paper, which brings it back as a positive. The resulting pictures and counter pictures, which are made in opposing proceedings, manipulate the senses of the audience and change their reception from scratch.

A similar differencing – combining approach is projected on other genera which results in a versatile, multiplatform, room‐filling installation consisting of pictures, paintings, sculptures, videos. This originates countless dimensions of reality for the audience and when combined presents a different world, or at least a shifted view of an existing reality.

The artists will now be able to present this approach on a new and global scale: the exhibition RAPTURE accrues within the project VIDEOWALL, which was the winner of the international competition at ART APRIORI. The subject of ART APRIORI was the modernization of traditional art museums in Eastern Europe.

The State Museum of Russian Art in Kiev, Ukraine is providing ARTISTS ANONYMOUS, beginning September 25th with a space from their permanent exhibition, for the virtual presentation of their pieces. Two parallel guidelines are planned: the first will be a direct transmission, starting September 18th, in the rooms of the currently running exhibition RAPTURE at WHITE SQUARE GALLERY ‐ this transmission can be viewed on two monitors inside the museum in Kiev, and secondly ARTISTS ANONYMOUS will display in the permanent exhibition rooms in the Kiev museum with huge video projectors, which will come into direct contact with real exhibition objects, and therefore create a new half ‐ real, half ‐ virtual sort of installation. This may establish a brand new way of displaying art.