Saturdays 11 am - 4 pm, by prior arrangement only 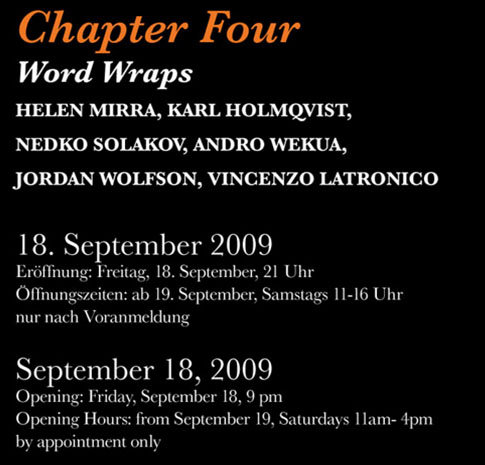 „All these „I“s are woven together in the writing; and, depending upon how they are read, and, and which particular aspects are highlighted, coalesce to fashion a shimmering texture.”
(Roland Barthes, Préparation du Roman, Paris, 2003)

The typographic term Word Wrap refers to a line break and shows the position in a text where one line ends and the next starts. A word wrap defines the length of a line; it can cut short the lines of a poem or allow the rows of words that a detailed description entails to be extended line upon line.

To wrap also means to pack, to enfold, or to encase. This exhibition marks a fourth chapter for the About Change, Collection, featuring bundles of words and combinations of images, neatly listed rows of words, and networked fragments of drawings, all cleverly packed, twisted, and collated.

The About Change, Collection is focused on collage, which it sees as a convergence of assorted realities, genres, and media. The collection is engaged in an ongoing exploration of the different aspects of collage and the opportunities this medium offers. In “Word Wraps” the spotlight falls on collages invested with a narrative character—collages which construct and weave new stories from text or image fragments.

Helen Mirra’s Indexes, for example, are adeptly collated rows of words, which the artist has culled from philosophical or literary works. Based on her own set of criteria, she selected terms, sentences, names, or thought fragments from the book Rings of Saturn by the German author W.G. Sebald (1944–2001) which she has typed onto white strips of cloth using a conventional mechanical typewriter. Next to each listed fragment of text she has assiduously added the respective page number. Mirra then arranges these “lines of cloth” into groups, creating long lines or short rows of words, yielding a completely new poetic entity. Just like the author, whose novel describes his hike through southern England, detailing his associative impressions and observations along the way; and just like the artist, who reads a book word for word, visitors can perambulate through Helen Mirra’s bands of text, absorbing words and allowing their imaginations free rein.

Mirra’s open-ended and associative treatment of language also finds expression in her two other works featured in the exhibition. From used europallets, carefully covered with a green and a blue woolen blanket, Mirra has crafted two reduced, abstract sculptures. Yet in her choice of titles—both quotations from Robert Walser’s “The Robber” (1925) she draws allusions to literature: “Evening, the dear friend waited for by little birds, so they might revel in his chill, 64, and “Forest, vestige of; which doesn`t actually look vestagal at all, 74”. Like the language of a poem, Mirra’s sculptures are highly-condensed distillations, carefully selected and positioned, and by virtue of her abstraction, she opens the door to new, wide-ranging mental landscapes.

For his performances, videos, and collages, Karl Holmqvist also combs through literature, pop songs, manifestos, and headlines in search of words and text fragments, which he morphs into text and image “wraps.” With his interweaving of visual images, melodies, and texts, Holmqvist highlights the connection between pop culture, politics, art, and literature.

In “Word Wraps” the Berlin-based artist shows some recent collages, together with the video I`m with you in Rockland (2005). Containing quotes from Allen Ginsberg’s Beat poem “Howl”, this video piece deals in a broader sense with the New York club culture of the early 90s. Affecting a monotone singsong voice, the artist intones his text fragments. And the white-printed lines running across the monitor against a black backdrop establish a formal link to Mirra’s indexes or Latronicos bookpages.

In his collages, however, Holmqvist fuses and intertwines images, reflections, and notes from his research into the Viennese Secessionists and their ideas on the Gesamtkunstwerk, the total work of art, with quotes from design and pop culture. With consummate virtuosity, Holmqvist wraps and entwines the design of the Austrian architect and Secessionist Josef Hoffmann (1870–1956) with the Dolce & Gabbana wristwatch
collections, and finally with Sinéad O’Connor’s song “War.”

“For me text and image are absolutely inseparable; they creat a unit. When I do a drawing […], I always have the stories underneath the image that has been drawn. When I draw an image, I only have a vague idea of how the story will develop.”* Nedko Solakov’s pictures tell stories or parts of stories, which are inspired from his acute (and sometimes absurd) observations of everyday events, related in his unique blend of word and image. In both series of drawings, Solakov distills ideas, stories, and observations into small, narrow lettering and finely-wrought sketches. As with the spoken word, the latter are always possessed of an ephemeral quality. Whilst availing himself of narrative conventions, Solakov’s treatment of language is not literary, but demotic in character. Language and image complement each other to forge an indivisible entity, relating wonderful stories.

The Georgian artist Andro Wekua processes stories and histories (often autobiographical) into his sculptures, installations, and collages. The faces of the figures revealed in the two collages exhibited could have been torn from the pages of a photo album. Wekua places cuttings from photos and newspapers in close juxtaposition with painted abstract surfaces and colored outlines. His compositions are narrative, and, at the same time, abstract, resembling blurred visual memories or largely forgotten film scenes, whose stories and contexts, however, remain open-ended.

The capacity for our perception of an image to change and our memories to mutate are the themes explored by Jordan Wolfson in his 16mm film Untitled False Document (2008). We see a young woman on a boat, holding up digital prints of different fruits to the camera, which she proceeds to let fall, one by one, into the water. A monotone, metallic computer voice enunciates ideas on the transformational quality of memories, the unreliability of the narrator, on identity and nostalgia. As the camera slowly zooms out of the scene, the observer becomes aware that the “action” is actually taking place on a flat screen situated within a sunlit living room. The sole viewer of the scene is a cat, squatting in front of the TV screen. In this subtly crafted film, whose alternating zooming in and out is akin to the motion of waves, Jordan Wolfson examines the issue of the reliability of our perceptions.

The Italian Vincenzo Latronico explores the various ways of interpreting and composing a text. Beginning with eight text sequences, each comprising five parts, the young author has written down all the possible combinations thereof, yielding a total of 32,768 short stories, or 32,768 variations of a love story—each independent of the other, and utterly unique.

Latronico’s debut novel Ginnastica e Rivoluzione was released in 2008 by the Italian publishers Bompiani. For Next time, perhaps (2009), he drew inspiration from the French author Raymond Queneau (1903–76), who in 1961 published One Hundred Thousand Billion Stories, an experimental ensemble of ten sonnets. Queneau constructed the book so that the fourteen lines of each sonnet can be individually turned over, and consequently combined with the lines of the other sonnets. Thus, potentially, this thin booklet of 14 sonnets contains “one hundred thousand billion poems.”

Whereas Queneau’s one hundred thousand billion combinations and various poems could never be actually seen in its entirety, Vincenzo Latronico sought to render visible the sheer volume of his 32,768 love stories. Each story was printed on a single page, resulting in a total of 32,768 pages which—each containing its own love story—are now stacked in the About Change, Collection . Visitors are also invited to take a page, as a variation of the piece Next time, perhaps. The English version of the work Magari la prossima volta (2009) is now on view for the first time outside Italy, and has been adapted especially by Vincenzo Latronico for the About Change, Collection.

The artists featured in “Word Wraps” arrange image fragments and text passages into rows, lines, or strips, into freely associative, densely-meshed networks or into flowing, recurring cycles to form a new entity. They create collages which tell new and different stories.

About change
Am Kupfergraben 10 - Berlin
Admission times: Saturdays, 11 am–4 pm By appointment only.
Admission free