This exhibition includes painting, video, installation, sculpture, and performance, and aims only to present a few of the ever-growing number of artists working in Berlin. However, rather than arriving to partake of a ready-made art scene, these artists have helped to develop it. Contemporary: Singularly Significant series by Janice Kerbel that leaves the viewer to imagine a visual equivalent of hyperbole and promise; and Heroes and Villains from KW-AG's Permanent Collection. 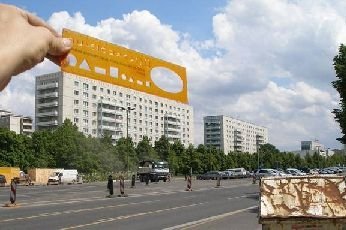 Berlin's history is one of successive reinventions. In the global imagination, particularly in the years since the fall of the Berlin Wall, Berlin has served as a point of political exodus. Its patterns of migration are inverse to those of New World towns such as that other Berlin (now Kitchener, Ontario). The German capital's relative financial impoverishment is one of the factors that now make it a desirable cultural destination. Rural North America was the recipient of many European mass migrations, and the local cultures reflect these global processes of migration and production, in the traces of their specific cultures of origin. It might be as specific as the tradition of die-making that exists in the Kitchener-Waterloo area via its German immigrant founders, or more generalized tendencies. What a region like southern Ontario has in common with a city like Berlin is a history of having been shaped by these patterns of migration, displacement and opportunity-seeking.

The expectation is that artists will prove to be the harbingers of processes of gentrification in Berlin, as has happened in countless neighbourhoods in other cities. Yet the process of turning a wasteland into a vibrant scene is neither a passive nor an automatic one; it happens by certain people in those cities gathering together, claiming and rehabilitating space, creating a demand for services and supplies, and building audiences for the things they do - all of which contribute to shaping the emergent cultural space. Though this exhibition includes painting, video, installation, sculpture, and performance, it aims only to present a few of the ever-growing number of artists working in Berlin. However, rather than arriving to partake of a ready-made art scene, these artists have helped to develop it. They evidently share an interest in the shape of the city and a personal will to contribute to an evolving milieu. Through the example of committed individuals, such as these, we can observe the culture of the city actually being built. - Germaine Koh

Building Berlin merges KW|AG's interest in the local and global activity in contemporary art. KW|AG has commissioned artist/curator and former Berlin resident Germaine Koh to curate this project. The online exhibition catalogue includes texts by Germaine Koh and German architect and researcher Marcus Miessen. In 2002, Miessen set up Studio Miessen, a platform for spatial strategy and critical cultural analysis. As a writer, Miessen has contributed, edited and advised globally, with published articles in more than 30 different international titles, from academic to scientific to popular culture.

About Germaine Koh
Germaine Koh is a Canadian visual artist based in Vancouver. Her conceptually-generated work is concerned with the significance of everyday actions, familiar objects and common places.

The Singularly Significant series features concise projects by artists marking significant developments in contemporary art practice. The series is designed to provide visitors with a glimpse of otherwise expansive endeavours.

KW|AG is pleased to present UK-based Canadian artist Janice Kerbel as a complement to CAFKA's 2009 theme of Veracity. Kerbel's practice often employs the framework of a 'plan' and the rigorous application of existing systems to explore and illuminate the relationship between reality and the realm of the imaginary. Kerbel's exhibition at KW|AG includes Remarkable, a series of prints reminiscent of fairground posters that announce the spectacular feats of improbable beings. Also included is Underwood, a series of four fictional love letters, one for each season, rendered in a typeface designed to mimic a faulty typewriter. Using text and the subtleties of reproduction, Kerbel leaves the viewer to imagine a visual equivalent of hyperbole and promise.

There have been stories told throughout history that have carried a timeless and profound resonance within mass consciousness. Perhaps these impactful myths, from the Epic of Gilgamesh to Star Wars, contain within them a reflection of the truth of our being which we intuitively recognize. Comparative mythologist Joseph Campbell identified an archetypal patterning, a common thread, through every myth ever created which he called "The Heroes Journey". He believed that through symbolism, mythology provides a glimpse of our own true nature and a road map to self actualization.

Being Magnified delineates this mythic commonality, the framework for all storytelling whether mythical, spiritual or filmic. At the beginning, ordinary beings respond to an innate internally driven curiosity to explore or improve their world, often characterized by a sense that there must be more or that things should be better. Their search for happiness, or an improved condition, brings them face to face with an obstacle, a decision, or an adversary which forces a discovery of untapped strength or wisdom within. Like a magnifying glass, this evolution amplifies the true being within - a unique and profound expression which resonates when witnessed by others.