Daily from 11 am-6 pm Thursdays until 9pm

'Echo' a black and white photo installation by artist Bettina Pousttchi is the second work to appear on the exterior of the Temporare Kunsthalle Berlin. Images eerily manipulated by digital processing entirely cover the four outer walls of the building and evoke memories of the former Palace of the Republic. The second year of the Temporare Kunsthalle Berlin starts with the group show Scorpio's Garden, curated by Berlin-based artist Kirstine Roepstorff. Selecting works and performances by more than thirty international artists, Roepstorff gives a subjective snapshot of the Berlin art scene. In her own works, Roepstorff creates collages of media images that critically deal with the history of political ideas and their failure. 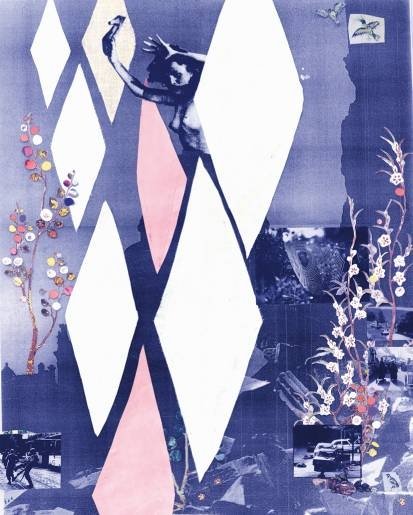 “Echo,” a black and white photo installation by Berlin based artist Bettina Pousttchi is the second work to appear on the exterior of the Temporäre Kunsthalle Berlin. Images eerily manipulated by digital processing entirely cover the four outer walls of the building and evoke memories of the former Palace of the Republic.

No attempt has been made at a scale or true-to-life reconstruction of the socialistic magnificent building which, in GDR times, was both the People’s Chamber and a public arts and leisure center. For “Echo” the artist pieced the palace façade together from archive pictures, reducing it to its essential structural components and introducing further elements as irritants. Digitally generated lines, for instance, disturb the mimetic presentation of the façade. They call to mind surveillance or early TV images, or a furtive view through the slats of a lowered blind. The two clocks on the long sides of the installation, replacing the GDR insignia, likewise establish an unexpected narrative plane and put one in mind of clocks at public places like airports, civil buildings, rail stations, and stadiums.

Appearing on Schlossplatz – site of architectural simulations of historic buildings such as the old Stadtschloss on more than one occasion in the past – only a few months after the last remnants of the Palace of the Republic were removed, “Echo” creates an eerie feeling of déjà vu. It directly references the changes taking place in the urban landscape, the individual faculty of memory, and also the suggestive role photography has to play. Thus the Palace, which the installation resurrects and reinterprets both playfully and discreetly at this historically and politically significant site, draws attention to the issue of the public handling of the past. The artist here takes up themes of earlier video installations and photo series, like “Landing” and “Take Off”, in which she explored the ambivalence of public images in relation to forms of representation and its inherent power structures.

Bettina Pousttchi (b. Mainz, 1971) lives and works in Berlin. She studied at, among other places, Düsseldorf Art Academy (1995–99) and took part in the Whitney Independent Studio Program New York (1999/2000). Work by the artist is presently on show at the Venice Biennale for the second time (Glasstress, Palazzo Cavalli Franchetti), and in exhibitions at the Kunstverein Hannover (Oppositions & Dialogues), Kunstmuseum St. Gallen (Born to be Wild), Kunsthalle Mainz (km 500/2), and Castello Santa Barbara in Alicante (No Such Place). Projects are planned for the fall, e.g. at the Wilhelm Hack Museum, Ludwigshafen (3rd Fotofestival) and the Kunstmuseum Thun (Pièce de Résistance). Two publications have appeared with Verlag der Buchhandlung Walther König, Cologne: Departure (2007) and Reality Reset (2008).

In her own works, Roepstorff creates collages of media images that critically deal with the history of political ideas and their failure. In her at times exotic compositions, she visualizes existing power relations. She simultaneously reorders what exists and develops interrelations between themes such as loss, excess, progress, growth, and capitalism.

With Scorpio’s Garden, her first show as curator, Roepstorff metaphorically interprets Berlin as a garden, thus emphasizing the city’s role as a platform for intensive intellectual exchange and artistic production—as a place where images, ideas, and concepts find a favorable medium in which to grow, proliferate, and compete with each other. The garden in which plants are cultivated and displayed reflects humankind’s treatment of nature and thus also the value systems and world views on which it is based. Roepstorff places special importance on the zodiac sign of Scorpio, which stands for decline, disintegration, destruction, and dissolution in the year’s cycle of growth and decay: not only does Berlin’s official birthday fall under this sign (the first mention of the city in a document is October 28, 1237), but so does the collapse of the Berlin Wall.

The works compiled for Scorpio’s Garden take up motifs of development and growth as well as decline and decadence, and interpret them in a contrapuntal and occasionally dissonant dialog of images characterized by sustainability, control, sexuality, and spontaneity. In this manner, they reflect the artistic energy and the dynamic competition distinguishing the art scene in this city, which is still making an effort to work its way out of the ruins of a traumatic century. The show is neither a retrospective nor an outlook; instead, twenty years after the Wall came down, it reflects Berlin’s continuing appeal to artists from all over the world and their activities in this city.

The performances included in the show and additional events will take place on various Mondays during the course of the exhibition. The evenings will by rounded off by the already well known Montags Bar.