Quiet as it's Kept

An exhibition featuring three painters based in New York, seeks to challenge the comforting discourse surrounding the presumed transnational identity of abstract painting. 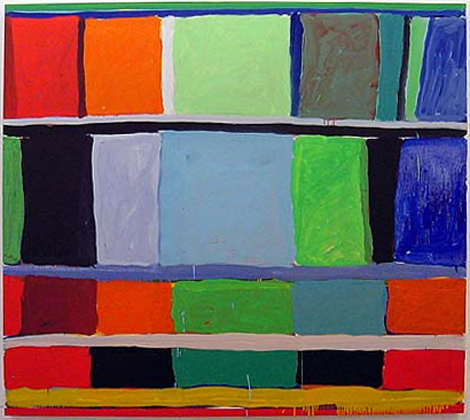 A unique exhibition curated by the artist David Hammons, Quiet as it`s Kept, an exhibition featuring three painters based in New York, seeks to challenge the comforting discourse surrounding the presumed transnational identity of abstract painting.

Painters Ed Clark, Stanley Whitney, and Denyse Thomasos are all abstract artists who are also African Americans. Each one works in New York City. While none of this seems remarkable in itself, this exhibition seeks to challenge the commonplace identification the art public often makes between black artists and what might be called facile narratives surrounding "African American art."

Such narratives often fail to take into account, suggests curator Hammons, the fact that there might be a unique and hitherto little examined approach to abstract painting that derives from the African American experience. Each of the artists in Quiet as itÂ´s Kept has spent his or her career attempting to evade the gaze of those who would police the definitions of "black" art.

ClarkÂ´s luminous canvases live in an environment of absolute freedom. The paintings are often created using a push broom, and carry within them not only an intimation of a reversal of status embodied in that tool, but the paintings also suggest an obscure sense of unrestricted play.

Whitney creates paintings in which color, randomness, and architecture are all constituent elements. The apparently random patterning of color in his canvases recall those patterns that can sometimes be seen in the cloth and quilt making artists of the African American south.
In the picture:
'Here and There' , Acrylic on canvas

On the other hand, Thomasos is concerned with the abstract patterns that draw their dynamism from those structures that have hitherto been considered as signs of restriction, such as jails and slave transport vessels.

"The identity of black culture," writes New York independent critic Geoffrey Jacques, who contributed an essay to the exhibitionÂ´s catalogue, "is deeply rooted in experiment practice." That aspect of black identity, which is widely recognized in music and is beginning to be recognized in literature, has rarely been recognized in the visual arts. With this exhibition, curator Hammons seeks to sharpen a discourse that will focus attention on the experimental nature of African American visual culture as well.