The Architectural Imaginary in Contemporary Art. The exhibition sets work by prominent, architecturally engaged artists such as Julie Mehretu, Matthew Ritchie, and Rachel Whiteread in dialogue with that of emerging practitioners, it includes works by 13 artists and one artists' collective hailing from 11 countries around the globe. The show is organized into 4 thematic groupings: architecture as language, architecture as memory, architecture as model, and architecture as surveillance. Contemporary "Museums in Miniature" explores the use of collage, assemblage, and staged tableaux by Marcel Duchamp and Joseph Cornell as plays on the notion of an exhibition space. 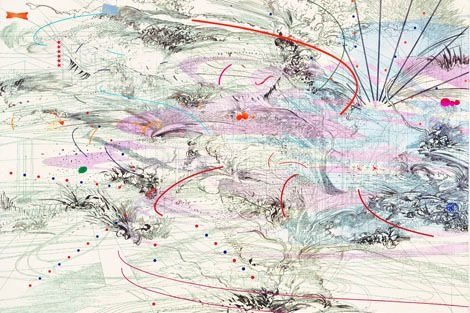 The Museum of Contemporary Art San Diego (MCASD) will present an innovative exhibition mapping the influence of architecture on contemporary visual art in an international context. Entitled Automatic Cities: The Architectural Imaginary in Contemporary Art, the exhibition sets work by prominent, architecturally engaged artists such as Julie Mehretu, Matthew Ritchie, and Rachel Whiteread in dialogue with that of emerging practitioners including Catharina van Eetvelde, Jakob Kolding, and Sarah Oppenheimer. Automatic Cities is curated by MCASD Curator Dr. Robin Clark and will be on view from September 26, 2009 through January 31, 2010 at MCASD’s La Jolla location.

Automatic Cities explores the psychological and metaphorical influence of architecture on contemporary visual art. The title of the exhibition refers to the Surrealist practices of automatic writing and automatic drawing, which sought to access individual creativity by tapping into the unconscious. The exhibition explores notions of architecture in the broadest sense, comprising images of sites and cities both built and unbuilt, rising from collective experience and imagination.

The exhibition is organized into four thematic groupings: architecture as language, architecture as memory, architecture as model, and architecture as surveillance. Paul Noble’s drawings of a fictional city constructed from a typographical font and Matthew Buckingham’s installation inspired by the garret where Samuel Johnson penned the first English language dictionary together with Ann Lislegaard’s 3-D animation based on J.G. Ballard’s novel The Crystal World will address relationships between architecture and language.

Memory projected onto the architectural surround is the topic of videos by Hiraki Sawa and Saskia Olde Wolbers. The exhibition will include examples of Rachel Whiteread’s sculptures and related drawings, which make material the idea of architecture as a locus of somatic memory. The third theme, architecture as model, will be revealed through installations by Los Carpinteros, Catharina van Eetvelde, Katrin Sigurdardóttir, and Michaël Borremans. Los Carpinteros’ work humorously and poignantly speaks to failed utopian dreams in Cuba, while Sigurdardóttir’s installations evoke the coastline and folklore of her native Iceland through the use of models. Paintings by Borremans demonstrate the uncanny potential of architectural models. Drawings by Catharina van Eetvelde that show architectural elements morphing alternately into plant life, computer circuitry, and animal forms are also part of the architecture as model section.

The final section of the exhibition will address the theme of surveillance. Julie Mehretu's layered paintings provide chaotic and polemic images of a militarized urban surround. Sarah Oppenheimer's installation, conceived as a "movie made with architecture" will consist of constructed portals that will frame views, which will in turn be animated by the movement of visitors. Matthew Ritchie will create a three-dimensionally rendered city that viewers may interact with through motion tracking software that translates physical movement into layers of sound and images. While the critical positions of the featured artists are diverse, their collective work reflects the vital influence of the architectural imaginary in contemporary art at the turn of the 21st century.

Sarah Oppenheimer will be artist-in-residence in conjunction with Automatic Cities and will create a new, site-responsive work for the exhibition. Oppenheimer will be the subject of a film created by MCASD’s Teen Art Council and will conduct a hands-on art-making workshop with the Teen Art Council. Matthew Ritchie created Remonstrance (San Diego Version) (2009) for the exhibition, where it will be on view for the first time. Ritchie is also making a new wall drawing for the exhibition. In conjunction with the exhibition, Julie Mehretu will give an art talk in October 2009 (date to be confirmed) and Ritchie will be the speaker at the annual UCSD/MCASD Russell Lecture at MCASD’s La Jolla location in November 2009 (date to be confirmed).

The fully illustrated catalogue features an essay and entries by Robin Clark as well as an essay by Giuliana Bruno, Professor at Harvard University and a critically acclaimed author on the topics of visual art and architecture. Bruno’s essay, entitled "Construction Sites: Fabricating the Architectural Imaginary in Art," provides a nuanced theoretical and historical framework for understanding the concept of the architectural imaginary in art, drawing primarily from the fields of modern philosophy and sociology. Clark’s essay, which shares its title with the exhibition, traces the development of the concept of the architectural imaginary through 20th-century avant-garde movements, including Dada, Surrealism, and Situationism before developing thematic considerations of contemporary production through the lenses of architecture and language, architecture as memory, architecture as model, and architecture as surveillance.

Automatic Cities: The Architectural Imaginary in Contemporary Art is organized by the Museum of Contemporary Art San Diego. The exhibition and catalogue are made possible by a generous gift from David Guss; and grants from the National Endowment for the Arts, a Federal agency; the Graham Foundation for Advanced Studies in the Visual Arts; the Danish Arts Council; and the American-Scandinavian Foundation. The Nimoy Foundation generously funded the residency of Sarah Oppenheimer. Education programs are supported by the County of San Diego Community Enhancement Fund and the Institute of Museum and Library Services.

Institutional support for MCASD is provided, in part, by the City of San Diego Commission for Arts and Culture.

Museums in Miniature explores the use of collage, assemblage, and staged tableaux by Marcel Duchamp and Joseph Cornell as plays on the notion of an exhibition space. Evocative juxtapositions, absurdities, and rebuses abound in Cornell’s work, demonstrating the enduring influence of Duchamp’s practice, and of Surrealism more broadly, during the second half of the 20th century. Duchamp will be represented by MCASD’s The Green Box (1934) and by a version of his Boîte-en-valise (1942-54), which contains miniature replicas of three of Duchamp’s works. Duchamp described the Boîte-en-valise as a "miniature museum," or a portable retrospective of his oeuvre to that point.

The exhibition also showcases several box constructions by Joseph Cornell. The rounded arches of Untitled (Grand Hôtel des Alpes) (1957) function as architectural fragments that refer to a monumental structure, while the elaborate fenestration of Pink Chateau (1944) seems the perfect backdrop for an epic ballet. Duchamp’s "miniature museums" are ironic, polemic, and humorous; Cornell’s are richly textured and extraordinarily poetic. Together the works by Duchamp and Cornell serve as a prelude to the exhibition, Automatic Cities on view in the adjacent galleries. The exhibition is curated by MCASD Curator Robin Clark