Mark Rothko: The Seagram Murals; the gallery is transformed into an emotive display of 9 dramatic paintings. Perceived, as the artist intended, in reduced light and in a compact space, the subtlety of the layered surfaces slowly emerges, revealing the solemn and meditative character of the works. Joyous Machines: the exhibition traces the development of Jean Tinguely's work from the 1940s to the late 1950s. Assembled from found objects and constructed with collaborators, the vast self-destructing machine was set into motion. Michael Landy's comprehensive responses to the work, including a documentary film and a selection of his series of drawings, are presented alongside photographs, films and relics of the original event. 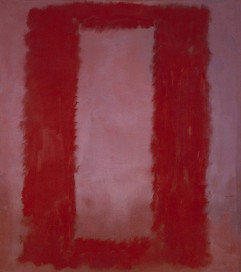 In 1988 Tate Liverpool opened with a memorable display of Mark Rothko’s The Seagram Murals. Over 20 years later the series will make a welcome return to the gallery. From 2 October 2009 – 21 March 2010 Tate Liverpool’s ground floor gallery will be transformed into an emotive display of these nine significant paintings – the walls will be painted grey according to Rothko’s specifications and atmospheric lighting will enhance the dramatic qualities of the works. This display is presented in conjunction with the Tate Collection display DLA Piper Series: This is Sculpture.

In 1958 Mark Rothko was commissioned to paint a series of paintings for the Four Seasons restaurant, in the Seagram Building in New York. Having devoted himself almost exclusively to the commission for eight months, he decided that the fashionable restaurant was an unsuitable place for the contemplation of his art, and the pictures were never installed. Working in his studio, Rothko matched the exact dimensions of the restaurant with a specially constructed scaffold. He painted three different versions of the series, refining his approach each time – the works presented at Tate Liverpool are from the second and third. The Seagram Murals were a significant departure for Rothko. His atmospheric compositions of stacked, floating rectangles were abandoned for a more severe architectural scheme. As the series progressed, his colours shifted from bright and intense hues to a selection of maroon, dark red and black.

In making these paintings Rothko was influenced by the sombre murals of Pompeii and, in particular, by Michelangelo’s Laurentian Library in Florence, with its blind windows and deliberately oppressive atmosphere, both of which he visited on a trip to Italy in the summer of 1959. Rothko commented that Michelangelo "achieved just the kind of feeling I’m after – he makes the viewers feel that they are trapped in a room where all the doors and windows are bricked up."

The artist presented the paintings to the Tate Gallery in 1968 and 1969, expressing his deep affection for England and for British artists, especially JMW Turner. The original display at the Tate was conceived in collaboration with the artist, resulting in the powerful and concentrated environment that he always envisioned for these paintings. Perceived, as the artist intended, in reduced light and in a compact space, the subtlety of the layered surfaces slowly emerges, revealing the solemn and meditative character of the works.

Jean Tinguely (1925-1991) was one of the most radical, inventive and subversive sculptors of the mid twentieth-century. A founding member of the Nouveau Réalistes, his work was playful, ironic and often anarchic. Joyous Machines: Michael Landy and Jean Tinguely at Tate Liverpool will be co-curated by renowned British artist Michael Landy who, having seen the Tate Gallery’s Tinguely retrospective exhibition in 1982, has been significantly influenced by the artist and his constructive and destructive tendencies. In Break Down (2001) Landy catalogued and destroyed every single one of his possessions from his birth certificate to his car.

The exhibition will focus upon Tinguely’s rarely examined early career, revealing the interplay in his sculpture between the functionless, the utilitarian and the destructive. The exhibition traces the development of Tinguely’s work from the late 1940s building up to his momentous Homage to New York. This, the most famous and influential of all ‘auto-destructive’ works of art, was a 27ft high self-destroying mechanism that came to life for 27 minutes during a performance in the Sculpture Garden of the Museum of Modern Art, New York on 17 March 1960.

Tinguely’s sculptures were often based on the machine and broke down the stabilities of the traditional artwork. In the early 1950s he freed himself from static compositions through the creation of kinetic sculptures that often include geometric shapes painted in bright primary colours. His extensive series of Méta-Malevitch reliefs of the same period consist of simple moving shapes cut out of metal, painted white and set against a black background. Motion and change are central to all these works, yet rather than being logical and sequential, their action was unpredictable taking months or years of operation before a sequence repeated itself.

The interaction of the viewer in Tinguely’s work, setting his machines in motion, is crucial to his examination of the relationship between people, machine and technological process in post-industrial society. The ‘meta-matic’ drawing machines of the late 1950s, several of which will be included, relied upon the participation of the viewer to fulfill their ultimate function – creating abstract works of art.

A major component of the exhibition will be devoted to Homage to New York. Assembled from found objects and constructed with collaborators including Robert Rauschenberg, this vast self-destructing machine was set into motion but, bursting into flames after only 27 minutes, it failed to self-destruct under its own terms and had to be extinguished by museum guards. Michael Landy’s comprehensive research and responses to the work, including a new documentary film and a selection of his impressive series of drawings (he has made over 160 in total), will be presented alongside photographs, films and relics of the original event.

With the support of Pro Helvetia, Swiss Arts Council