Works from the collection of the Museum of Contemporary Art in Sofia (MUSIZ) explore in different ways the relationship between image, text and media representation, referring to mass media and global film culture, as well as to the patterns of their image production. On show Martin Kippenberger, Gunter Reski, Anri Sala and many others. 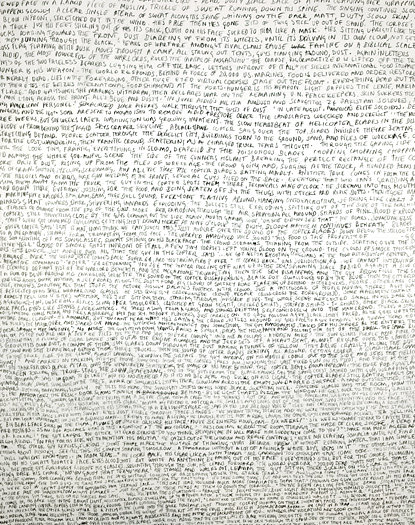 On October 10th, 2009 the MUSIZ COLLECTION Exhibition opens in the Bulgarian Cultural Institute in Hamburg. For the first time works from the collection of the Museum of Contemporary Art in Sofia (MUSIZ) will be shown. The Institute's building was specially renovated for the occasion, and the exhibition can be visited till the 1st of November.

In 2005, after a long lobbying campaign and a number of art projects related to the issue of the museum, the opening of the Museum of Contemporary Art, Sofia (MUSIZ) at the Poduyane railway station in Sofia was announced. Despite the lack of a building, since 2006 the museum has been gathering a collection, from which the works included in the exhibition are part of. Specially selected for the event in Hamburg are those of artists, who already are historical figures in contemporary art, such as VALIE EXPORT and Martin Kippenberger, as well as young stars like Anri Sala.

There is more to be seen at the exhibition: the estranged, infantile figures in the paintings of Kati Barath; the marginal and absurd images, often associated with the representation of trauma, in the paintings of Berlin based artist Gunter Reski; the word-drawings of Fiona Banner - especially 'Black Hawk Down', 2004, her exploration about the modes of representation and narration in military movies, such as the one directed by Ridley Scott; a serial of self-portraits by the American artist Jimmie Durham, and stills from Sue de Beers video installation 'Hans und Grete', 2003, dealing with psychological imbalance and personality disorder in modern society.

The works explore in different ways the relationship between image, text and media representation, referring to mass media and global film culture, as well as to the patterns of their image production.

MUSIZ develops a local, yet cosmopolitan policy of collecting, which monitors the history of art beginning from the waves of minimalism, conceptual art and pop art until the present day. They have an immediate bearing on the development of a contemporary art scene in Bulgaria after 1989, which is associated with overcoming the local tradition of abstractionism. Today the museum collection includes mostly artists from the 1970ies and 1980ies till present ones, naming William Anastasi, Greg Bogin, Clay Ketter, Imi Knoebel, Santiago Sierra, Mark Dion, Daniele Buetti, Italo Zuffi, Christoph Keller, Maria Lindberg, Olaf Nicolai, Alexander Brenner and Barbara Schurz, Wawrzyniec Tokarski, Ralf Ziervogel, Michael Hakimi, Lea Asja Pagenkemper, Sejla Kameric, Alban Muja, son:DA, as well as artists based in Bulgaria.