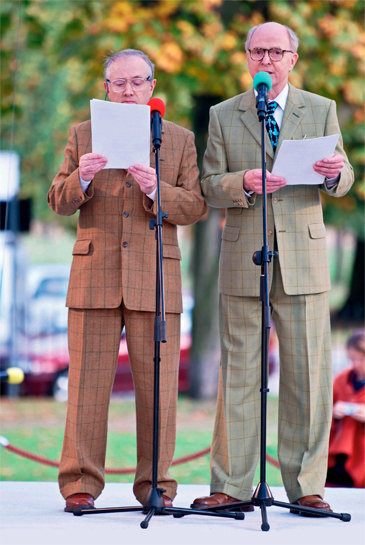 An international group of major figures will be brought together to perform in the Serpentine Gallery Pavilion 2009, designed by architects Kazuyo Sejima and Ryue Nishizawa of the acclaimed Japanese practice SANAA. The event will include performances of new work, collaborations, discussions and experiments.

There is a long and vivid history of exchange between artists and poets. Guillaume Apollinaire made a literary connection to Cubism with his great work of 'visual poetry' Calligrammes: Poems of War and Peace 1913-1916. In the same period, Hugo Ball wrote the Dada Manifesto (1916), a movement in which the poet, essayist and performance artist Tristan Tzara was also closely involved. A decade later, in 1924, André Breton, the proponent of 'automatic writing', published La Révolution surréaliste (The Surrealist Revolution).

In the 1950s, Abstract Expressionism was an art movement with strong creative connections with writing and poetry of the time, from the work of poets Frank O'Hara and John Ashbery to artist Robert Motherwell's influential essays on the New York School. Later, in the 1960s, the international artistic network Fluxus formed innumerable close links between visual art and the written word.

The Poetry Marathon is the fourth in the series of Marathons staged in the Serpentine Gallery Pavilion each year. The Marathon series was conceived by Serpentine Gallery Co-director Hans Ulrich Obrist in 2006. The first in the series, the Interview Marathon in 2006, involved interviews with leading figures in contemporary culture over 24 hours, conducted by Obrist and architect Rem Koolhaas. This was followed by the Experiment Marathon, conceived by Obrist and artist Olafur Eliasson in 2007, which included 50 experiments by speakers across both arts and science, and the Manifesto Marathon in 2008.

The Serpentine Gallery Pavilion series is an ongoing programme of temporary structures by internationally acclaimed architects and designers. It is unique worldwide and presents the work of an international architect or design team who, at the time of the Serpentine Gallery's invitation, has not completed a building in England. The Pavilion architects to date are: Frank Gehry, 2008; Olafur Eliasson and Kjetil Thorsen, 2007; Rem Koolhaas and Cecil Balmond, with Arup, 2006; Álvaro Siza and Eduardo Souto de Moura with Cecil Balmond, Arup, 2005; MVRDV with Arup, 2004 (un-realised); Oscar Niemeyer, 2003; Toyo Ito with Arup, 2002; Daniel Libeskind with Arup, 2001; and Zaha Hadid, 2000. Each Pavilion is sited on the Gallery's lawn for three months and the immediacy of the process – a maximum of six months from invitation to completion – provides a peerless model for commissioning architecture.

All contributions will be approximately 15 minutes long
*Remote participant