The Fellini exhibition comprises mainly photographs and drawings by director, original film posters, period magazines and excerpts from his film. To mark this exhibition Vezzoli has decided to present two new works which address the paradoxical status of illusion and fiction in our perception of reality, together with some of the themes that haunt Fellini's work. For his project at the Jeu de Paume, Vonna-Michell extends his ongoing research on Chopin. The resulting installation, sound and film piece will combine fact and fiction, history and interpretation in what will be a search for origins of sorts of the post-war avant-garde, but also of the artist himself. 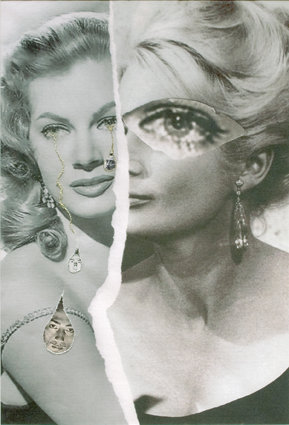 To attempt to put on a Fellini exhibition means to go back to the sources of Fellini’s art and studying and revealing its processes of transformation, alteration, borrowing and accumulation. The result is a set of strata combining filmic elements, photographic documents, magazine presentations of the event, TV images and works by artists.This exhibition is resolutely multidisciplinary. It sets out to offer a new grid for reading Fellini’s films.

The event and the historical fact, History and anecdote, biography and fiction are the materials that, by means of confrontations, echoes and dialogues, Fellini used to built his distinctive narratives and original visual environments. Showing the creative context of Fellini’s work in an exhibition means showing the nature of his creative mechanisms.

While many now legendary scenes have come to be seen as perfect incarnations of Fellini’s prolific imagination, it now looks as if a more thorough analysis of the context will offer a fresh point of view on his work. Such a hypothesis sits well with Fellini’s own inclinations. Trained as a caricature artist in his youth, for a while he earned a living by doing portraits of GIs on leave, and all through his life he would show the same visual acuity, the same ability to gather so much more than images in his freeze-frames of reality.

The exhibition at the Jeu de Paume affords a glimpse of Fellini’s creative mechanisms by showing his unique ability for absorbing the real. It comprises mainly photographs and drawings by Fellini, original film posters, period magazines and excerpts from his film.

To mark the exhibition devoted to Federico Fellini, Vezzoli has decided to present two new works which address the paradoxical status of illusion and fiction in our perception of reality, together with some of the themes that haunt Fellini’s work: his fascination with celebrities, the shifts in desire and imaginative slants occasioned by the hegemony of the mass media, and the persistence of myth in social and political life.

The Jeu de Paume auditorium is hosting the “video version” of Vezzoli’s performance at the Guggenheim in New York as part of Performa 2007: Right You Are (If You Think You Are) is a reinterpretation of the Luigi Pirandello’s Each in His Own Way, with Cate Blanchett, Ellen Burstyn, Natalie Portman, Peter Sarsgaard – in the presence of Fellini muse and icon Anita Ekberg, the unforgettable protagonist of La Dolce Vita. Here Vezzoli transformed the original play – a parable of the impossibility of objective truth – into a meditation on our obsession with fame and the private lives of celebrities.

In the same vein as his work on the relationship between the public and “media truth,” the second piece, specially created for the Jeu de Paume, masquerades as an advertising campaign for “La Nuova Dolce Vita,” a mysterious exhibition that will never take place. In it an internationally renowned Hollywood star, Eva Mendes, is presented as the glamorous embodiment of this imaginary event, the inaccessible icon of an exhibition replaced by its “communication tools” as pre-publicity morphs into closing credits.

Born in Brescia in 1971, Francesco Vezzoli studied at Saint Martins College of Art in London and lives and works in Milan. He exhibited at the Venice Biennale in 2007 and the Whitney Biennial, New York, in 2006.
An international art figure ever since he started out, Vezzoli has been delving into the media/fame system since the late 1990s, via that contemporary, highly commercial version of pagan godliness embodied by the celebrity.

in partnership with: Evene.fr, Mouvement and mouvement.net, Souvenirs from Earth TV and Stiletto

TRIS VONNA-MICHELL is a consummate storyteller. He elaborately constructs tales that he speaks aloud to listeners, in his typical face-paced speaking style, or leaves behind him in the form of clues or traces that narrate wild and incomprehensible connections between disparate things. Whatever the explicit subjects to which his voice turns (a crumbling post-industrial Detroit, an outdated 1980s film, a defunct music scene, German railways, a man named Otto Hahn, buildings ruined by aerial bombings), his actual subject is—perhaps always and inescapably—history (with and without a capital H). And the ways history (of necessity and by definition) takes convoluted roads to get where it has gone, a bit like the artist-orator.

For his project at the Jeu de Paume, the artist’s first solo exhibition in Paris, Vonna-Michell will extend his ongoing research on Chopin (a relatively obscure but important figure in the French post-war avant-garde, father of the typewriter poem who died in 2008), after several months researching in Paris to find the surviving acquaintances and colleagues of the deceased poet and search for any remaining photographs, film, publications and other material attesting to Chopin’s prolific but largely unknown output. The resulting installation, sound and film piece will (as with most all of Vonna Michell’s projects) combine fact and fiction, the carefully planned and the merely coincidence, the concrete and the imagined, History (with the capital H) and interpretation (with an intimately personal touch) in what will be a search for origins of sorts—of the post-war avant-garde, but also of the artist himself. The exhibition’s accompanying publication will be a true artists’ book, including a narrative written by Vonna Michell about his practice and search for Chopin. The artist’s own notebooks in which he has recorded the idiosyncratic thoughts, impressions, and ideas that are the center of his narrative practice inspire the book’s form.