Form Matters. The comprehensive overview looks at key moments in his development as well as at major recent projects including the Museum of Modern Literature in Marbach, Germany, the America's Cup Building in Valencia, Spain, the newly completed Neues Museum in Berlin and the Hepworth Museum in Wakefield, Yorkshire. This detailed survey examines a range of projects through new and archive models, sketches, drawings, photographs and film. 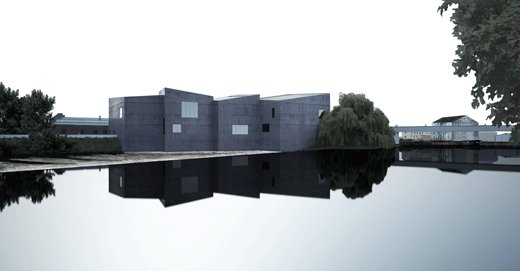 One of the most important architects working today, David Chipperfield produces subtle and sophisticated buildings with an acute sensitivity for materials and a powerful awareness of their environment. This major exhibition celebrates his work for the first time in the UK and spans his entire career to date, including such acclaimed projects as the River and Rowing Museum in Henley-on-Thames, and the Museum of Modern Literature in Marbach, Germany, winner of the RIBA Stirling Prize for Architecture 2007. The exhibition also illustrates important public commissions including the reconstruction of the Neues Museum in Berlin, and The Hepworth Wakefield gallery.

This detailed survey examines a range of projects through new and archive models, sketches, drawings, photographs and film. A major component of the exhibition focuses on Chipperfield’s most complex project to date, the ten year reconstruction of the Neues Museum in Berlin, which was bombed during the Second World War and subjected to decades of neglect. The project is like nothing previously undertaken in its attitude to history, and its attempt to make something new out of the old has succeeded in producing a landmark building, not only for Berlin but for museum architecture as a whole.

After studying at Kingston University and the Architectural Association, and working at the practices of both Richard Rogers and Norman Foster, David Chipperfield established his own practice - David Chipperfield Architects - in 1984. Unprepared to compromise with the commercial developers of the 80s, Chipperfield looked beyond Britain to mainland Europe, where he could see himself as part of a group of architects who brought a seriousness and intellectual ambition to their work that went beyond stylistics or mannerism. David Chipperfield Architects is today a substantial international practice with projects across Europe, as well as in China, Japan, the USA and Mexico.

As David Chipperfield’s practice has grown and matured, he has developed his own distinctive voice. His buildings often combine a variety of materials to create beauty and meaning with appealing clarity. Buildings that subtly inspire without spectacle or fanfare.