Every version belongs to the myth

Stimulated by the layering and riffing of stories and standards, divergent interpretations and the idea of artworks as screens, the exhibition is rooted in an interest in the function of myth. Works by Maria Barnas, Michael Fortune & Aileen Lambert, Felix Gmelin, Mahony, Gareth Moore, Pavel Pepperstein, Amalia Pica and Elizabeth Price. 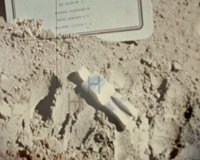 Stimulated by the layering and riffing of stories and standards, divergent interpretations and the idea of artworks as screens, Every version belongs to the myth is rooted in an interest in the function of myth.

Whether the authenticity of a myth lies in tracing its roots and origin, is revealed as part of the immediate context or, whether the true authentic myth lies in the accumulation of all of the moments in which it is performed, is at the heart of the thinking behind the exhibition. Just as the individual take on a given object will continue to transform it, so too does the possibility of temporary ownership and participation in a bigger cultural truth. In his chapter 'The structure of myth' from Structural Anthropology, Claude Levi Strauss departed from the practice of mythologists who were striving to find the oldest, most authentic version of a myth in order to study it. Strauss suggests that a myth is kept alive by its constant retelling and transformation. It is in this multiplicity that the myth exists, and he proposes to gather as many versions as possible to understand it completely.

In complicity with these ideas is the figure of the Irish Seanchaí (i), the storyteller who, when travelling from town to town, would tell accumulated stories of mythical origin, historical lessons or current events, mixing fantastical adventures with factual renderings. Every version belongs to the myth takes these ideas into the world of artworks and objects by examining how physical things act as screens for individual interpretation, preventing an object from having an impervious, singular authority. This presents an interesting narrative structure from which to look at artworks that deal with questions of genre, remaking, reinterpreting, restaging and adaptation; to look at works which point to contexts outside of their own immediacy, taking inspiration from other cultural artefacts and producers and even previous incarnations of themselves.

The most poignant proposition this has for artworks is that the actuality of a thing is the sum of all of the contexts in which it has existed. In this sense, it is the artwork alone that can ever be the true witness to its own nature, as in most cases, the artwork or artefact will be the only constant presence in the different places in which it is shown (ii). None of the artworks have been specifically commissioned for this exhibition, and all have been described differently when exhibited elsewhere.

The exhibition will feature divergent interpretative guides, describing and responding to the artworks, which will help to complicate the viewer's experience. Three versions of this guide will be produced - by the curators; by Juno Claffey-Hegarty (Student at RMDS, Ranelagh, Dublin) with many thanks to Vaari Claffey; and by Caoimhín Mac Giolla Léith (Senior Lecturer in the School of Irish, Celtic Studies, Irish Folklore and Linguistics at University College Dublin).

Thanks to all the supporters and lenders for this exhibition, including Kewenig Galerie, Zabludowicz Collection, David Noonan, Catriona Jeffries Gallery, Vilma Gold, the artists and writers. Thanks also to the curatorial collective IM projects who included a version of this exhibition in Circa, Autumn 2009.

Project Arts Centre is delighted to work with the National Museum of Ireland on a number of exploration workshops, using a collection of artefacts for handling called If Things Could Talk.

(i)
Seanchaí
The Seanchaí, Ireland's storyteller of old, is a travelling master of tales who would captivate young and old with stories around the glowing hearth. The Seanchaí travelled from town to town, telling stories of origin, tales of Fionn and the Fianna, of wondrous battles and adventures. Included in the tales were the myths which incorporate actual physical wonders; the extraordinary basalt columns known as the Giant's Causeway, originally linking the northern Irish coast to that of Scotland by way of a massive bridge, were torn apart by the hasty and terrified retreat of Fionn Mac Cumhaill's adversary, the Scottish Benandonner. The Seanchaí would weave in stories of Ireland's struggle for independence from the British, stories of heroism and tragedy, from famine to battle. The Seanchaí, who would also relate particular stories by request, created his own legends as he travelled. The story of the man who fell off a roof into a pail of milk in the previous town was just as relevant as the heroic feats of the giants and men. Integral to the longevity and survival of Ireland's oral tradition of story-telling, the Seanchaí is now a scarcely-seen figure, more likely to appear at a literary or cultural festival than at the door of a rural pub as dusk nears.

(ii)
I will dance with the boy, who danced with the girl, who danced with the Prince of Wales.
...As I came closer to the woman, she said: "All these objects are old. Some of them are really old, and some of them less so. But they are all old. Would you like to choose one?" I picked up a small round piece of white stone, mainly because I could not guess what it was. When I had it in my hand I could see it was concave. It looked like a small vessel. She asked me if I could guess what it was. I couldn't. As I was holding it, she explained: "It is an eyeliner container from ancient Egypt. If you look at the rim around the top you can see they used to attach a piece of cloth with a string to act as a lid." I was taken over by a magical feeling, while standing there with this strange object in my hand, feeling close to it. And I started looking at the rest of the objects, asking what they were. The little square piece of cloth was once wrapped around an Egyptian mummy. The woman said it used to be twice the size, but had shrunk as so many people had touched it. I contributed. Someone long ago had touched, even made this object, and I was now touching their touch. Between then and now thousands of other people had touched it, including the lady who had just handed this to me. And this rusty old tune came to my head… "Bailaré con el chico que bailó con la chica, que bailó con el Principe de Gales". I guess in the end I did want to dance with the prince...

For more information on If Things Could Talk please email
gallery@projectartscentre.ie

Image: Moon Golem, Amalia Pica 2009, detail of an intervention on NASA's official image of the monument on the moon