The exhibition assembles some sixty exceptional pieces in floral marquetry, in tortoiseshell and brass marquetry or gilt bronze, witnesses to Andre'-Charles Boulle's talent. Displayed side by side with bronzes, tapestries and paintings, they illustrate the cultural beacon that was Paris at that time, and the genesis of a new European aesthetic. 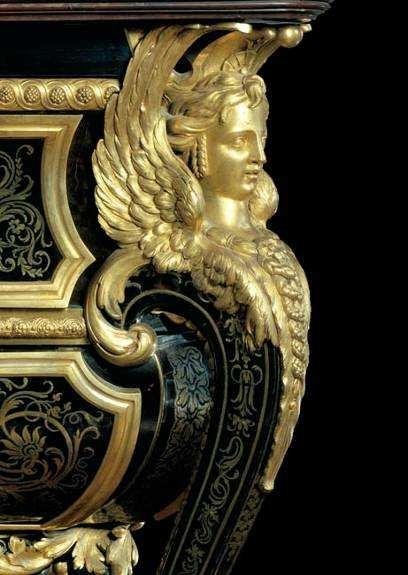 From 28 October 2009 to 31 January 2010 will take place the first ever retrospective about André-Charles Boulle, the most illustrious cabinetmaker of all time. With a scenography by Juan Pablo Molyneux, it will take place in the Museum of Decorative Arts of Frankfort, the emblematic building created by Richard Meier. It was conceived by two French art historians, Jean Nérée Ronfort and Jean Dominique Augarde, in close cooperation with Professor Ulrich Schneider, director of the Museum für Angewandte Kunst (Museum of Decorative Arts) of Frankfort.

Even before he was 30 years old, the name of André-Charles Boulle (1642-1732), Founder, Chaser, Gilder, Sculptor and Marqueter Ordinary to the King, was famous throughout Europe. In 1672 Louis XIV granted him a workshop inside the Louvre palace. His totally innovative genius in the concept of forms is paired with an unheard of virtuosity in the use of gilt bronze, which he was the first to unite with marquetry on a background of tortoiseshell. His creations were the absolute summit of opulence and elegance, combining extraordinary forms with materials verging on the precious, and a technical excellence never achieved again since.

He worked for the Queen, the King, the Grand Dauphin and for the princes of the royal family. Eminent bankers of the kingdom vied for his works to furnish their mansions on the Place Vendome. The Princes Electors of Saxony, Bavaria and Cologne, the King of Spain, were among his clients. Displayed today in the greatest museums of the world, and symbols since three centuries of financial and social success, André Charles Boulle’s furniture is inseparable from other expressions of French art avidly sought after by the foremost European courts at the time of the Sun King.

The exhibition « André Charles Boulle (1642-1732) and the Art of his Time, A new Style for Europe » is the fruit of the combined expertise of a French group, The Association André-Charles Boulle and the Museum für Angewandte Kunst (Museum of Decorative Arts) of Frankfurt which hosts this event unique of its kind. Most of the works will be shown for the first time, and some have never before left the countries where they are conserved. This is the case for the loans from the State Hermitage Museum in Saint Petersburg, the Mobilier National in Paris, the Château of Versailles et des Trianons, the Banque de France, the Castle of Mannheim, the Museum of Fine Arts of Boston, the Swedish Royal Collection, and other major cultural institutions. In all, nearly thirty international museums whose names bring to mind the treasures of Western civilisation, and a few eminent private collectors, from seven countries (France, Germany, Great Britain, Slovenia, Sweden, Russia, and the United States of America) will have permitted the coming together of these masterpieces. Through their loans they will reveal to the public an unprecedented image of a decisive evolution of Western art.

The exhibition assembles some sixty exceptional pieces in floral marquetry, in tortoiseshell and brass marquetry or gilt bronze, witnesses to André-Charles Boulle’s talent. Displayed side by side with bronzes, tapestries and paintings, they illustrate the cultural beacon that was Paris at that time, and the genesis of a new European aesthetic. A rare collection of original drawings by André-Charles Boulle’s contemporaries from the Museum of Decorative Arts in Paris and Berlin will complete this ensemble. The Manufacture des Gobelins, founded by Louis XIV in 1662, which has since become the Mobilier National, will also exhibit its latest works by the most committed contemporary designers, from Le Corbusier to the brothers Bouroullec, furniture and tapestries symbols of its continuity of creation.

In a city considered to be one of the crossroads of Europe, this exhibition will reflect the age-old economic and cultural ties between Germany and France. By the presence of remarkable works of art it will show how a community of taste and thought was established between the two countries, but it will also illustrate the cultural cooperation between them and the other European countries, and in a larger sense, the United States. Monsieur Nicolas Sarkozy, President of the French Republic, has granted his High Patronage to the exhibition.

A prestigious international honour committee brings its support to this event. Present among its members are particularly H.E. Bernard de Montferrand - French Ambassador to Germany, H.E. Reinhard Schäfers - German Ambassador to France, but also H.E. Alexander Avdeev, Minister of Culture of the Russian Federation. The exhibition also receives the support from the City of Frankfort and the State of Hessen, and the French Heritage Society (U.S.A.), and solicits the participation of firms and private patrons wishing to assert their engagement in favour of a strong European cultural policy through this emblematic project.

An eminent scientific committee guarantees the quality of this event. In addition to Jean Nérée Ronfort, Jean Dominique Augarde and Ulrich Schneider, it is composed of other specialists in Decorative Arts ; Arnauld Bréjon de Lavergnée - Director of the collections of the Mobilier National et des Manufactures des Gobelins ; Joan Dejean - Trustee Professor at the University of Pennsylvania, Philadelphia ; Theodore Dell - American historian, author of the catalogue of André-Charles Boulle’s furniture at the Frick Collection of-York ; Peter Hughes - Former Curator of the Wallace Collection in London ; Hans Ottomeyer - General Director of the Deutsches Historisches Museum in Berlin ; Tamara Rappe - Director of European Decorative Arts at the State Hermitage Museum of Saint Petersburg ; Sigrid Sangl - Curator at the Bayerisches Nationalmuseum in Münich ; Gillian Wilson -Curator Emeritus of Decorative Arts of the J. Paul Getty Museum in Los Angeles.

The exhibition will also be the starting point for a cycle of symposiums to take place over a period of two years in Germany, England and the United States. A scenography signed Juan Pablo Molyneux.

The building of The Museum für Angewandte Kunst which hosts the exhibition is emblematic of the city of Frankfort. Conceived by Richard Meier in 1985, it was to influence the design of the J. Paul Getty Museum and became the model of all future creations by the architect. In this building, bathed in light, Juan Pablo Molyneux will situate the exhibition. He will create the proper setting to enshrine the aesthetic to which Boulle has given birth, and which was to become a paradigm of art for centuries to come. A fierce proponent of engaged classicism, Molyneux conceives scenographies that find their origins in History, without however being simple reconstitutions. “I try to distil that which is expected in order to transform it into something unexpected “he says.