Space as Medium is a group exhibition focusing on the development of artistic practices that directly address the walls, floors and ceilings of the physical spaces in which they are installed. It combines extant objects with commissioned, site-specific installations and includes works by William Anastasi, Lynda Benglis, Tom Burr, Ryan Gander, Katharina Grosse, Wade Guyton, Nicolas Lobo and Rachel Whiteread. The Carlos Bunga's Metamorphosis exhibition features two site-specific, large-scale structures created from perishable materials such as cardboard and packing tape emphasizing ideas of impermanence, crisis and decay. 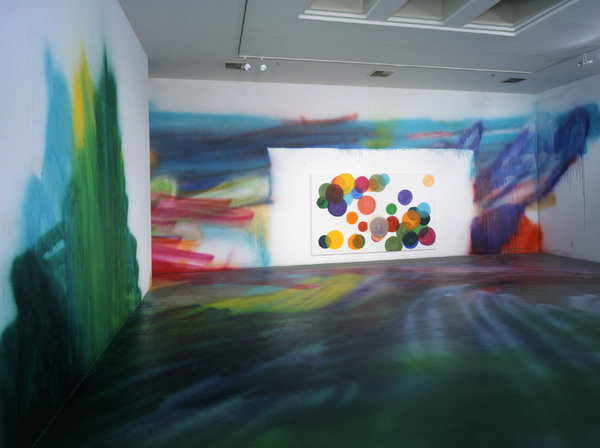 Miami Art Museum presents Space as Medium (November 20, 2009 – February 28, 2010), a group exhibition focusing on the development of artistic practices that directly address the walls, floors and ceilings of the physical spaces in which they are installed. The exhibition is conceived as an inter- generational dialogue among artists who helped develop these practices in the 1960s and the younger artists whom they have influenced and inspired, either directly or indirectly.

"Spatial concerns and the related concept of ‘site specificity’ have been of central importance to contemporary art since at least the end of the 1950s; in the 1960s and 70s they comprised the primary focus for artists associated with Minimalism, Institutional Critique, Process Art and other tendencies," said MAM Associate Curator René Morales, curator of Space as Medium. "The goal of this exhibition is to draw upon the rich ideas behind the approaches that those artists developed while exploring in depth some of the ways in which their underlying premises were later questioned, reconfigured and eventually redeployed."

Space as Medium is structured around three loosely demarcated points of reference: New York in the 1960s and 70s, one of several primary points of origin for space-based practice; the 1980s and 90s, during which some of the assumptions of the previous generation were processed and built upon; and more recent, complex re-engagements with the earlier strategies, which collapse categories of critique and homage, formalism and "criticality," viewer relation and scale, anti-aesthetics and visual exhilaration. The exhibition presents an ideal opportunity to assess current bodies of radically space- contingent work by artists such as Katharina Grosse in art-historical context, while shedding new insight onto the less chartered theoretical waters that they have opened up in recent years.

Space as Medium is organized by Miami Art Museum and funded by MAM’s Annual Exhibition Fund.

Carlos Bunga: Metamorphosis features two large-scale, site-specific structures made from perishable materials such as cardboard and packing tape emphasizing ideas of impermanence, crisis and decay. Bunga’s constructions – which grow organically and sometimes recall provisional street shelters – arise from a dialogue with the existing architecture of the sites at which they are built. The structures employ the motif of the metabolic processes that sustain living organisms as a metaphor for the continuous mutation of architecture and urban space. In the last stage of the work, after carefully building his structures for weeks, Bunga submits them to a radical transformation. Through a performative, cathartic act, he slices the walls of this construction and pulls it with his body to reveal additional layers and traces hidden within its interior.

"With a particular interest in the connection between the pictorial and the architectural, Carlos Bunga investigates urban space and the transitory nature of architectural structures," said Rina Carvajal, adjunct curator at Miami Art Museum and curator of the exhibition. "Behind his psychologically and politically charged environments lie urgent and timely issues related to demographics, immigration, socio-economic disparity and the fragility of contemporary urban life."

Artist Performance Sunday, November 22, 3pm
Carlos Bunga carries out an intervention within his site-specific installation at Miami Art Museum. His performance will evoke the impermanence of contemporary urban life.
Free with museum admission

Miami Art Museum serves one of the most diverse and fast-growing regions of the country, where a confluence of North and Latin American cultures adds vibrancy and texture to the civic landscape. MAM embraces its role as a cultural anchor and touchstone in a city that welcomes countless ethnic and age groups, lifestyles and ideas. MAM’s far-ranging vision is expressed in the breadth and depth of its exhibition program, and its ambitious education and public programs. The Museum continues to build its collection of holdings from the twentieth century through the present, as it embarks on a major new building and expansion project. The new MAM designed by Herzog & de Meuron is scheduled for completion in downtown Miami’s Museum Park in 2012.