Days and Giorni. Museum opens exhibition of two Bruce Nauman highlights of Venice Biennale. The two sound installations are the artist's most recent works in the thematic survey comprising four decades of Nauman's provocative art. In both Days and Giorni, the days of the week are recited by a range of participants from a script of subtly varying combinations written by Nauman. The voices differ in language -English in Days and Italian in Giorni- and also in rhythm and progression. The installation of each work consists of 7 pairs of square, flat panel speakers clipped to floor-to-ceiling metal cables and configured in succession along the length of the galleries. 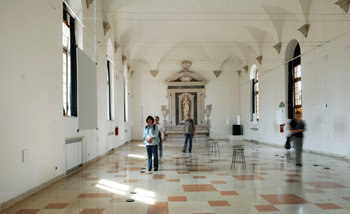 From November 21, 2009 through April 4, 2010, the Philadelphia Museum of Art will host the U.S. premiere of two sound installations, Days and Giorni (both 2009), by the celebrated American artist Bruce Nauman. Days will be presented in the main Museum building’s Gisela and Dennis Alter Gallery (176) and Giorni in the Perelman Building’s Exhibition Gallery, each filling these large spaces. This exhibition marks the first time in seven years that Nauman is showing new major installations in the United States.

The two works are currently on view in Bruce Nauman: Topological Gardens, the exhibition organized by the Museum to represent the United States in the 53rd Venice Biennale. They are the artist’s most recent works in the thematic survey comprising four decades of Nauman’s provocative art. In June, the exhibition garnered the prestigious Golden Lion for the Best National Participation, the first time since 1990 that the United States has received the much-coveted award.

"We are delighted to bring these remarkable works by Bruce Nauman to Philadelphia," said Timothy Rub, the Museum’s George D. Widener Director and Chief Executive Officer. "They reflect the depth of Nauman’s vision in its most mesmerizing aspect and they are wonderful highlights of the Venice Biennale, where the United States and Philadelphia in particular have drawn tremendous attention. We are thrilled to share these exceptional works with audiences here in Philadelphia and across the U.S."

In both Days and Giorni, the days of the week are recited by a range of participants from a script of subtly varying combinations written by Nauman. The voices differ in language—English in Days and Italian in Giorni—and also in rhythm and progression. The voices that comprise Days were recorded and edited over time in the United States. Nauman recorded Giorni during a single day in Venice where he worked with students and faculty of the Universitá Iuav di Venezia.

The installation of each work consists of seven pairs of square, flat panel speakers clipped to floor-to-ceiling metal cables and configured in succession along the length of the galleries. The voices that emanate from these directional speakers that comprise Days and Giorni can be experienced collectively or in isolation, creating an orchestration of sound that is moving, forceful and unrelenting. As Nauman’s text both repeats and deftly rearranges the days of the week, it likewise alters and undermines the sequence that normally measures the passage of time.

"The presentation of Days and Giorni in the context of the Museum’s ‘Notations’ series, which is exclusively devoted to contemporary art, will allow our visitors to draw parallels between these works and those of the Museum’s collection, including other works by Nauman," said Carlos Basualdo, the Keith L. and Katherine Sachs Curator of Contemporary Art, who organized the presentation in Philadelphia with Project Curatorial Assistant Erica Battle. "Bruce Nauman is one of the most influential artists of our time, and it will be thrilling to see his new works in the context of those by Marcel Duchamp and Jasper Johns, which are also essential components of the Museum’s collection."

During the run of Bruce Nauman: Days and Giorni, the Museum will also present an installation of three recently acquired early films and videos by the artist, in Galleries 178 and 179. This selection—including Dance or Exercise on the Perimeter of a Square (Square Dance) of 1967-68, Slow Angle Walk (Beckett Walk) of 1968, and Wall-Floor Positions of 1968—features Nauman using his own body to investigate the space of his studio through systematic and repetitious movements. Nauman filmed these works shortly after creating his iconic Window or Wall Sign of 1967 which was recently acquired by the Museum for its permanent collection and is on view in Gallery 170.

To mark the opening of Notations/Bruce Nauman: Days and Giorni, the Museum is publishing a book of photographs illustrating Nauman’s works in situ in Topological Gardens that were taken by Michele Lamanna, a former student of Università Iuav. The 60-page book, titled Bruce Nauman: Topological Gardens/Installation Views represents a rare opportunity to publish installation photographs that document the exhibition of Nauman’s work in Venice and will now serve as a complement to the exhibition’s 240-page catalogue featuring four scholarly essays on Nauman’s work and the Venice project. The forthcoming publication Bruce Nauman: Topological Gardens/Installation Views is supported by a professional development grant from The Pew Center for Arts & Heritage through the Philadelphia Exhibitions Initiative.

In Topological Gardens at the Biennale, Giorni is presented at the Exhibition Spaces at Universitá Ca’Foscari while Days is on view at Università Iuav. In collaboration with the Università Iuav and the Università Ca’ Foscari, the Museum organized the U.S. participation to spread across Venice with installations at the U.S. Pavilion and the two universities. The installations at the universities continue through October 18, while the installation at the U.S. Pavilion is on view through November 22. Carlos Basualdo, the Keith L. and Katherine Sachs Curator of Contemporary Art, and Michael R. Taylor, Muriel and Philip Berman Curator of Modern Art, Philadelphia Museum of Art, served as the U.S. Commissioners.

Notations/Bruce Nauman: Days and Giorni is made possible by the Commonwealth of Pennsylvania, the Henry Luce Foundation, and The Pew Charitable Trusts, with additional funding from Agnes Gund, Maja Oeri and Hans Bodenmann, Sperone Westwater Gallery, and many other Friends of Bruce Nauman. The related catalogue was made possible by Isabel and Agustín Coppel, and was published on the occasion of the premiere of these works in Bruce Nauman: Topological Gardens, the official U.S. representation at the 53rd International Art Exhibition—La Biennale di Venezia, which was organized by the Philadelphia Museum of Art.

BRUCE NAUMAN, A BRIEF HISTORY
Bruce Nauman was born in 1941 in Fort Wayne, Indiana. During his undergraduate years at the University of Wisconsin, Madison, Nauman studied mathematics and physics before changing his focus to studio art under Italo Scanga, among others. Nauman pursued an MFA at the University of California, Davis, where faculty artists Wayne Thiebaud, William T. Wiley, and Robert Arneson supported his growing desire to investigate art making beyond his earlier abstract paintings. There he experimented with casting objects in fiberglass and polyester resin, leaving their surfaces unrefined to reflect the casting process. While at Davis, Nauman also staged his first two performances, one utilizing a fluorescent tube as an extension of his body as he performed mundane actions, which he would later record on video. After graduate school, Nauman occupied a storefront studio in San Francisco where he focused on the act and process of making art by photographing visual puns and daily actions. An old neon beer sign in this former grocery store served as inspiration for Nauman’s celebrated neon, The True Artist Helps the World by Revealing Mystic Truths (Window or Wall Sign). At once genuine and ironic, this statement initiated a tongue-in-cheek discourse concerning the role of the artist in society that persists through much of Nauman’s work. The Philadelphia Museum of Art recently acquired this iconic work from 1967 for its permanent collection. Nauman later moved to Wiley’s studio in Mill Valley, California, where he made various films of himself walking around the space while altering his bodily movements including Dance or Exercise on the Perimeter of a Square (Square Dance) of 1967-68 and Slow Angle Walk (Beckett Walk) of 1968. He began to garner critical attention in 1966 with his first solo show at the Nicholas Wilder Gallery in Los Angeles, as well as his inclusion in Lucy R. Lippard’s Eccentric Abstraction group exhibition in New York. Nauman’s solo debut in New York at the Leo Castelli Gallery in 1968 was soon followed by a one-man exhibition at the Konrad Fischer Gallerie in Düsseldorf. In 1972-73, the Los Angeles County Museum of Art and the Whitney Museum of American Art co-organized the first major survey of his work, Bruce Nauman: Works from 1965-1972, an exhibition that traveled to Italy, Switzerland, Germany, the Netherlands, and other U.S. venues. Since 1975, Nauman has been represented in New York by Sperone Westwater.

Influenced early on by philosophy and literature—including Wittgenstein’s Philosophical Investigations and Samuel Beckett’s Molloy—Nauman constantly tests rational systems of language, spatial and bodily boundaries, duration, and psychology, using sculpture, video installations, and constructed environments. In the late 1960s, Nauman continued to work with neon and also began to construct corridors, sometimes filming his performances within them. Larger constructed environments in the early 1970s often included video surveillance cameras and monitors that overlook and record viewers as they entered these spaces. Nauman continued to make large sculptures and installations in the 1970s and early 1980s, mapping space with masking tape or evoking physical or psychological constraints through the creation of passages and tunnels. Nauman halted his work with video for about a decade before taking it up again in the mid1980s with many multi-channel video installations that further explored language and his metaphorical use of labyrinths and the personae of rats and clowns. In the late 1980s, he also introduced the iconography of life-sized animals cast in wax that hang suspended in carousel-like formations. The 1990s brought sculptures of human heads and hands in wax and bronze, video installations, and sustained work with neon. In the early twenty-first century, Nauman’s video work, sound installations, and sculptures expand upon themes that have resurfaced throughout his career.

Museum exhibitions have mapped Nauman’s development with notable solo shows, including Bruce Nauman, 1972-1981 held at the Rijksmuseum Kröller-Müller, Otterlo, in the Netherlands and at the Staatliche Kunsthalle, Baden-Baden, in West Germany in 1981; a survey organized by the Walker Art Center, Minneapolis, that traveled in 1993-95 to Madrid, Los Angeles, Washington, D.C., and New York; and, in 2006-07, an exhibition of his early work, A Rose Has No Teeth, which traveled to the University of California Berkeley Art Museum, Castello di Rivoli Museo d’Arte Contemporanea in Turin, Italy, and the Menil Collection in Houston, Texas. Among the prestigious group shows that have included Nauman are the Venice Biennale in 1978, 1980, 1999, and 2007, as well as several Documenta exhibitions (1972, 1977, 1982, and 1992). Garnering multiple awards throughout his career for his exceptionally wide ranging and conceptually challenging practice, Nauman has most recently been honored with the Golden Lion for Best National Participation for Topological Gardens, an exhibition of his works at the 2009 Venice Biennale. He received the Wexner Prize in 1994, the Leone d’oro (The Golden Lion) along with Louise Bourgeois at the 48th Venice Biennale in 1999, and the Praemium Imperiale for Visual Arts in 2004 in Japan. He holds honorary Doctor of Fine Arts degrees from the San Francisco Art Institute and the California Institute of the Arts, as well as an honorary PhD from Università Iuav di Venezia. Since 1975, he has been represented in New York by Sperone Westwater. Nauman lives in New Mexico with his wife, the painter Susan Rothenberg.

The Philadelphia Museum of Art is among the largest art museums in the United States, showcasing more than 2,000 years of exceptional human creativity in masterpieces of painting, sculpture, works on paper, decorative arts and architectural settings from Asia, Europe, Latin America, and the United States. An exciting addition is the newly renovated and expanded Perelman Building, which opened its doors in September 2007 with five new exhibition spaces, a soaring skylit galleria, and a café overlooking a landscaped terrace. The Museum offers a wide variety of enriching activities, including programs for children and families, lectures, concerts and films.

The Philadelphia Museum of Art is located on the Benjamin Franklin Parkway at 26th Street.